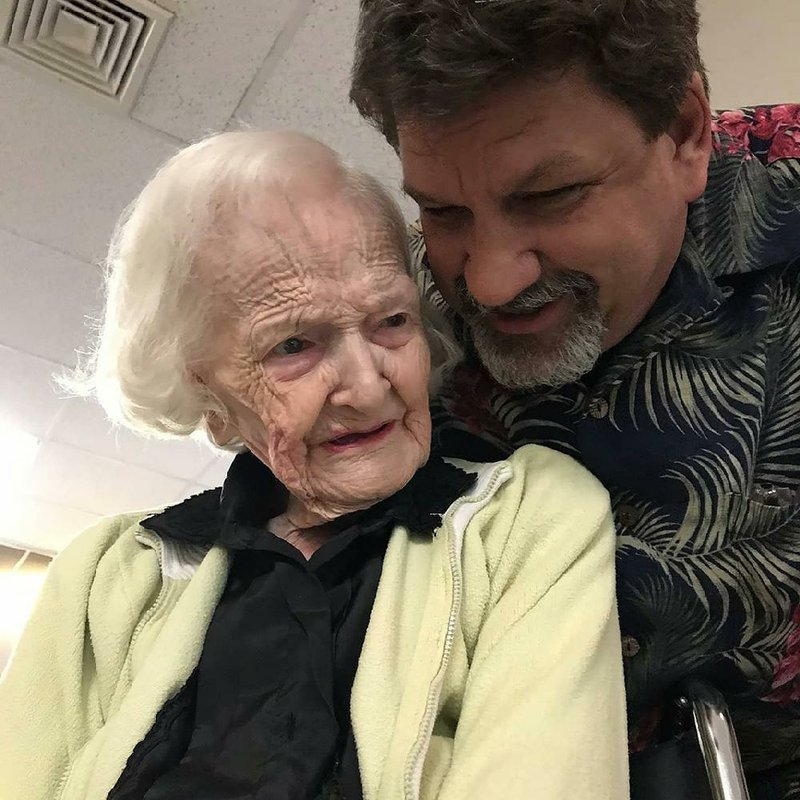 Mary Blount gets a hug from her grandson, Keith Andrews, on her 107th birthday at Briarwood Nursing and Rehabilitation in Little Rock. (Special to the Arkansas Democrat-Gazette)

In mid-March, the staff at Briarwood Nursing and Rehabilitation Center learned that a male resident who recently returned from a hospital stay had tested positive for the coronavirus.

Working with the state Health Department, the nursing home tested all residents and employees at the 120-bed center.

The results brought worse news: 37 residents and 15 workers had tested positive for covid-19, the disease caused by the virus.

Among them was 107-year-old Mary Blount, "our star and the eldest in the building," said Dr. Bushra Shah, the staff doctor who treats residents at the South Rodney Parham Road nursing home in Little Rock.

Blount's grandson, Keith Andrews of Birmingham, Ala., received a phone call within hours of the diagnosis.

Covid-19 can be fatal for those who are elderly or sick. But Andrews and other family members didn't assume the virus would end his grandmother's life.

When he asked that first day how Blount was feeling, Andrews was told, "She seems OK and is showing no symptoms, along with several of the others."

Later, "she had a fever, not high, about 100. Then it went away. They called me every day. Her oxygen was good. She seemed to have no other symptoms."

Andrews and other relatives reminded one another: Yes, Mary Blount is 107 and has covid-19, but she's a fighter and a survivor.

Born in Alexandria, La., on Aug. 10, 1912, Blount lost her mother during childhood. Her father moved the family to North Little Rock when she was a schoolgirl, according to Andrews and a sister, Julie Andrews, of Bradenton, Fla.

Blount survived the 1918 flu pandemic, the Great Depression, World War II and 75 more years of war and peace, prosperity and recessions. She lived through the terms of 19 U.S. presidents, William Taft to Donald Trump.

She married twice and worked for a time in the state finance department at the Arkansas Capitol to support her children, family members said.

Red-haired, Blount liked to wear dress clothing and full makeup, with well-coiffed hair and fingernails. She never learned to drive, so she walked or rode buses in Little Rock.

Her two children, who have died, were a son, Arden Powell Andrews, and a daughter, Ada Patricia Andrews. The daughter was a special-needs child born with Down syndrome.

After the death of her second husband, Aubrey Blount, in 1982, Mary Blount lived alone in her Capitol View neighborhood home for two decades, until she was 91.

When a fall that year broke her hip, Blount went to Briarwood for rehab -- and never left, Keith Andrews said.

Briarwood administrator Joan Robbins said she has had a resident as old as 117, "but usually you start to lose" even the very oldest after 105, she said.

Until recent years, Blount took part in activities, ate meals with her table of friends and continued to dress up daily.

Asked how her grandmother came to live such a long life, Julie Andrews at first said she didn't know, then added: "She never smoked. She never drank. She knew the Lord. She was a lovely lady. The only time she had a health issue was when she fell and broke her hip."

Blount celebrated her 100th birthday in 2012, with family members from several states joining her. Her grandchildren shared pictures of her 102nd birthday and other gatherings, including a visit on Valentine's Day this year.

Two or three years ago, she dislocated a shoulder and complained loudly to a doctor who moved her arm painfully. Doctors decided she was in good enough shape to operate. "She came through and was fine," said Keith Andrews. Blount also survived two falls from her wheelchair around Christmas, 2019.

In March at Briarwood, when the covid-19 positive results were reported, the nursing home went into "full infection control mode," according to administrator Robbins and owner Michael Morton, who operates 32 nursing homes in Arkansas, three in Oklahoma.

Residents testing positive were quarantined on the second floor. Staff members caring for them, including some who had tested positive for covid-19 themselves, also worked only that floor.

Dr. Jennifer Dillaha, the Arkansas state epidemiologist, complimented Briarwood on the infection-control work: "They did a really good job under a really difficult situation."

Thirty-four of the 37 residents who tested positive in March are currently symptom-free, according to Shah, the nursing home's medical director. She and other nursing home staff are hopeful they've recovered or are recovering.

Three residents at Briarwood who tested positive for covid-19 have since died, according to coroner reports and staff. There are no deaths among workers.

Of the three residents who died, two women, ages 83 and 94, weren't able to overcome the coronavirus.

Blount surprised everyone. Her only seeming issue -- a brief, mild fever -- disappeared in March, according to Shah. Otherwise, she remained symptom-free.

"She met our criteria for recovery" from covid-19, Shah said.

The nursing home was making plans to again retest Blount and other coronavirus-positive residents, expecting results to show they were negative.

But by April 4, a Saturday, Blount began showing signs that her organs were shutting down. She had declined food and drink for several days. The staff called family members to let them know their grandmother might be dying.

Blount died peacefully, according to nursing home staff, at 4:48 a.m. April 5. The last entry on her chart says a caregiver was holding her hand.

Blount is listed now in Arkansas' record of covid-19 victims.

She's the oldest so far by more than a decade.

Her death certificate will not show the virus as the main cause, but will list it as a contributor, according to Shah, the nursing home doctor who signs the document.

That contributing cause of death and Blount's positive coronavirus test qualify her as an official victim of the global pandemic.

But Blount's family and her doctor aren't convinced covid-19 killed her.

Given Blount's long life as a survivor, her almost nonexistent symptoms of the virus and apparent recovery, Shah said she has come to look at her patient's death this way:

She "fought the last battle" against the coronavirus -- "won it, made peace with herself and exited."