2 virus fatalities in Arkansas linked to exposure in hospitals 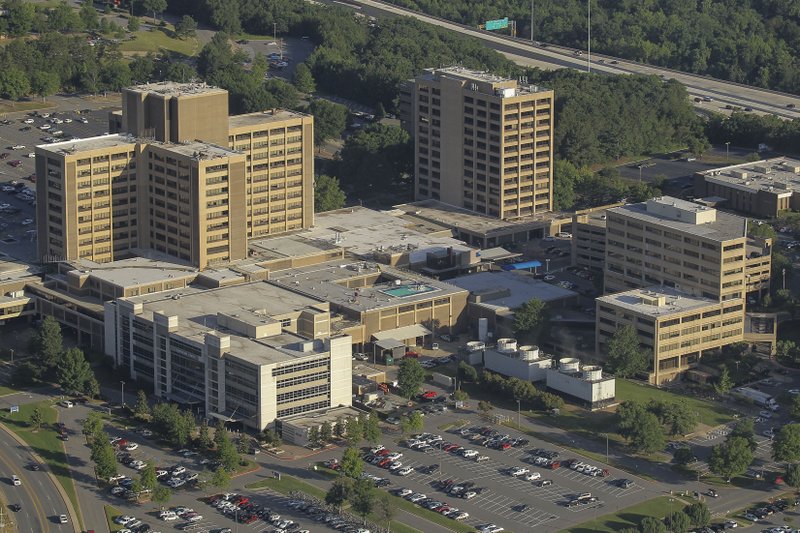 The Baptist Health campus on Kanis Road in Little Rock is shown in this 2016 file photo.

At least two Arkansans who died of covid-19 contracted the virus inside hospitals from caregivers while receiving treatment for other ailments, family members said, underscoring the risk of infection inside care centers.

The son of one man who died at Baptist Health's North Little Rock hospital said he believes his 63-year-old father, Virgil Sinkey, caught the coronavirus from his surgeon when he was admitted in early March for an emergency gallbladder removal.

A second victim, Rodney Cottrell, contracted the virus at Baptist's Little Rock hospital, "presumably from a visitor," according to a coroner's report. Cottrell's wife said Friday, however, that his doctor told her the night nurse likely was the source.

Hospitals globally have confronted the challenge of how to care for infected patients while limiting the spread of a virus that can jump from people who show no symptoms.

A group of Italian physicians in a March 21 paper warned that "hospitals might be the main Covid-19 carriers, as they are rapidly populated by infected patients, facilitating transmission to uninfected patients."

Arkansas hospitals, including the Baptist system, have implemented several policies aimed to slow contagion -- including restricting elective procedures, banning most visitors and requiring all staff members to wear protective masks.

Yet at least 168 health care workers in Arkansas have contracted the virus, according to the Arkansas Department of Health. That number accounts for care workers in all settings, including nursing homes, and represents nearly 1 in every 7 of the state's known cases as of Friday.

The statistics show the virus circulating in clinical environments, despite efforts to bar its entry.

An Arkansas Democrat-Gazette survey of six of the state's largest hospitals found at least 23 hospital workers tested positive for the virus as of last week, including 16 at Baptist facilities.

The total number of infected hospital workers is higher than 23, however. Multiple hospitals declined to disclose to the public how many direct-care or other staff members have tested positive. The Arkansas Department of Health on Friday could not provide hospital-specific data or numbers on how many caregivers have transferred the virus to patients.

Baptist Health spokeswoman Cara Wade said the system could not comment on individual patients because of patient-privacy laws. She provided a written statement from Dr. Amanda Novack, the system's medical director for infection prevention, in response to general questions and an interview request.

The "crisis is a rapidly changing and fluid situation," and the hospital took some precautions "even before CDC guidelines recommended doing so," Novack said, referring to the Centers for Disease Control and Prevention.

Specifically, Baptist suspended visitor access to common areas -- such as the cafeteria -- on March 13, limited most patients to one visitor on March 18 and suspended all routine visitation on March 25. The system began requiring that all caregivers wear masks as of March 16, ahead of federal guidelines, Novack said.

Baptist investigates every case of employees or physicians testing positive for the virus to determine "every single health care worker or patient who could have been exposed."

Hospital officials look into what protective gear the worker was wearing, whether a patient was isolated and all other people the caregiver may have contacted.

"If any of these are deemed to be a high-risk exposure, these employees and physicians would be removed from service until they are cleared," Novack said.

Sinkey, of North Little Rock, caught the virus while hospitalized for emergency gallbladder treatment, according to his family and coroner records.

Founder of an asphalt-hauling truck company four decades ago, he ran Sinkey Trucking, his son said. Sinkey was quiet, enjoyed working on trucks and was a fan of Western movies, according to the son, who asked not to be identified by name.

During the week of March 16, Sinkey began showing signs of covid-19, but the family had no reason to suspect he had it. His symptoms included a fever and respiratory problems, his son said.

Often, people with similar symptoms are asked if they had known contact with a covid-19 carrier or traveled to areas known to be hot spots.

The hospital staff informed Sinkey on March 23 that the surgeon who first treated him had later tested positive for covid-19. Sinkey was tested the same day, and the family was informed of the positive results on March 25, according to his son.

Sinkey's underlying health conditions included diabetes, lung disease and high blood pressure, according to a report obtained from the Pulaski County coroner's office. Such conditions are believed to elevate the risk of death.

"I blame them for nothing," Sinkey's son said of the hospital. "They were doing their job. It's not their fault."

Cottrell, an 84-year-old who lived in both The Woodlands, Texas, and Little Rock, was admitted to the Baptist Medical Center on Feb. 19 for a coronary artery bypass, according to a Pulaski County coroner's report.

A geophysicist in Houston, he spent much of his time after retirement traveling, golfing and playing with his Labrador retriever, Champ. He had one son, two daughters and twin granddaughters.

"He had a great sense of humor, he supported and accepted me," said his wife, Ann West. "None of my ideas were too crazy or wild."

The coroner's report says Cottrell received his positive covid-19 test result on March 27. A hospital worker told the coroner's office that he acquired the virus in the hospital, "presumably from a visitor."

But according to West, Cottrell's doctor said her husband contracted it from his night nurse.

She's not angry at the hospital -- just sad. The staff did the best it could, she said. She's thankful for the care her husband received.

After the positive test, Cottrell admitted himself into hospice care, according to the report.

During their last call, she could hear his labored breathing through the phone receiver.

"He was able to respond to me," West said of one of her final calls with her husband. "I was able to tell him how much I loved him and to thank him for the memories."

While the Arkansas Department of Health has identified dozens of health professionals who have been infected with covid-19, it's not clear which providers are most affected, in part because some hospitals are reluctant to disclose that information.

Almost half of those diagnosed are nurses or certified nursing assistants, agency data shows, who are likely to have direct contact with patients.

As of last week, the 16 Baptist Health workers who had tested positive for covid-19 included at least six caregivers who "were exposed to positive patients," Novack said. "Of those remaining 10, five were exposed from a co-worker and the other five were exposed in the community."

At the University of Arkansas for Medical Sciences' Little Rock campus, seven direct-care staff members -- of about 4,500 -- have tested positive for covid-19. None of those workers were thought to have been exposed on the job, a spokeswoman said.

No staff members were infected at UAMS' Northwest campus, the spokeswoman said.

Other hospitals either skirted the question or said they would not provide information on affected workers to the newspaper.

Natalie Hardin, a spokeswoman for Washington Regional Medical Center in Fayetteville, declined to disclose to the public the number of workers at the hospital with covid-19.

The coronavirus, which has threatened to overrun hospitals with infected patients and can be passed along by asymptomatic carriers, has magnified infection control issues.

The federal CDC estimates that roughly 1 of every 31 hospital inpatients gets a health-care-associated infection. The public health agency has worked to improve those figures through surveys and recommendations since at least 2009, its website says.

As a whole, Arkansas has performed well on reducing infections in health settings, compared with the national baseline, according to agency data.

Infections acquired through health providers in Arkansas declined between 2017 and 2018, and providers had better-than-average performance on metrics such as infections in central lines and catheters and an infection associated with antibiotic use.

Only infections tied to the use of ventilators -- breathing machines -- were higher than the national average.

In March, the CDC said health care workers who were exposed to covid-19 patients may continue working in most cases, if they wear masks and don't have symptoms.