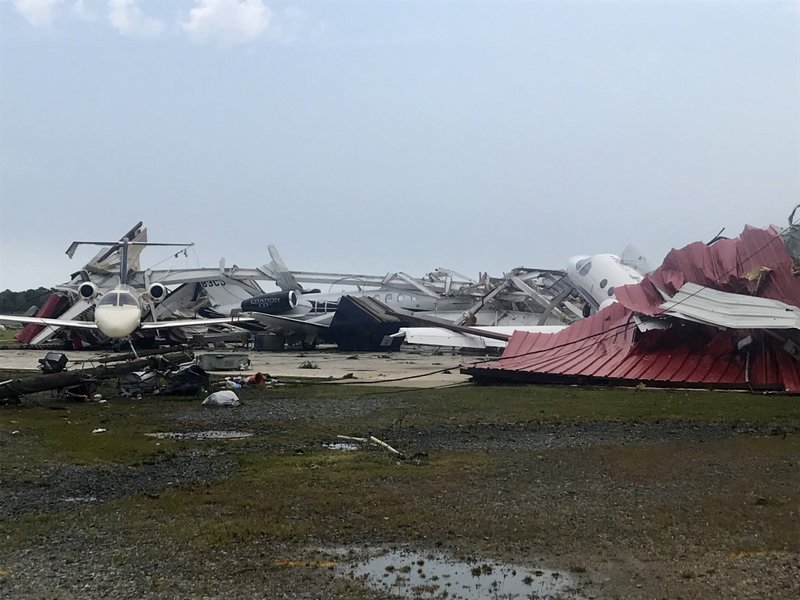 JACKSON, Miss. -- Strong storms pounded the Deep South on Sunday, killing at least six people in south Mississippi and damaging up to 300 homes and other buildings in northern Louisiana.

The National Weather Service said strong winds were sweeping through other parts of Mississippi, and a tornado was spotted north of Meridian near the Alabama state line.

Mississippi Gov. Tate Reeves declared a state of emergency Sunday night after he said several tornadoes had struck the state.

"This is not how anyone wants to celebrate Easter," Reeves said on Twitter. "As we reflect on the death and resurrection on this Easter Sunday, we have faith that we will all rise together."

Before the storms moved into Mississippi, the weather service reported multiple tornadoes and damaging winds over much of northern Louisiana. There were no immediate reports of serious injuries. Utility companies reported thousands of power outages.

The mayor of Monroe, La., Jamie Mayo, told KNOE-TV that the storm damaged 200-300 homes in and around the city. Flights were canceled at Monroe Regional Airport, where siding was ripped off buildings and debris was scattered on runways. Airport director Ron Phillips told the News-Star the storm caused up to $30 million in damage to planes inside a hangar.

In northwest Louisiana, officials reported damage to dozens of homes in DeSoto and Webster parishes, according to news outlets.

In Morgan County, Ala., a church roof and steeple were damaged by lightning Sunday afternoon, Eddie Hicks of the Morgan County Emergency Management Agency told AL.com. Shoals Creek Baptist Church in Priceville was struck by lightning as well. No injuries were reported.

The stretch of dangerous weather kicked off Saturday as hail larger than softballs pummeled Del Rio, Texas -- the first sign of a volatile atmosphere teeming with instability. A number of rotating supercell thunderstorms towered high above West Texas and the Hill Country, even bringing an early-morning tornado scare just north of Austin.

The outbreak's timing on Easter Sunday presented a trifecta of communication challenges that made raising awareness even more difficult. Besides landing on a holiday weekend, the outbreak fell at the height of the coronavirus pandemic that's shaken many communities.

Some have shuttered community storm shelters due to concerns about the virus spreading, adding an additional hurdle to those eager to get out of harm's way. Some experts have weighed in, arguing in favor of prioritizing seeking shelter, with the American Meteorological Society even chiming in with a forceful statement late last week.

Today, much of the Mid-Atlantic and Southeast could be in the cross hairs, with the potential for an additional day of tornado and high wind risks.

The greatest threat for severe storms and tornadoes will be from coastal Georgia and South Carolina northward into Virginia, where the Storm Prediction Center has designated an enhanced risk -- level 3 out of 5. That risk also calls for the threat of "significant" severe weather, including strong tornadoes.

A level 2 out of 5 slight risk trails south to Florida and reaches north all the way to the Pennsylvania-New York border.

Once again, tornadoes will be possible -- particularly in northern North Carolina and adjacent Virginia, where the latest computer model guidance hints that a strong tornado can't be ruled out. Scattered damaging winds, perhaps gusting above 65 mph, are possible in storms as well.

Even outside of any storms, wind gusts in excess of 50 to 60 mph will overspread most of the Mid-Atlantic into New England as the cold front pushes eastward, raising the concern for power outages. Wind gusts up to 70 mph are anticipated along Long Island and in coastal New England, and high winds may eventually cover a wide swath from New York to Boston and into northern areas as well.

Information for this article was contributed by Emily Wagster Pettus of The Associated Press; and by Matthew Cappucci and Andrew Freedma of The Washington Post.