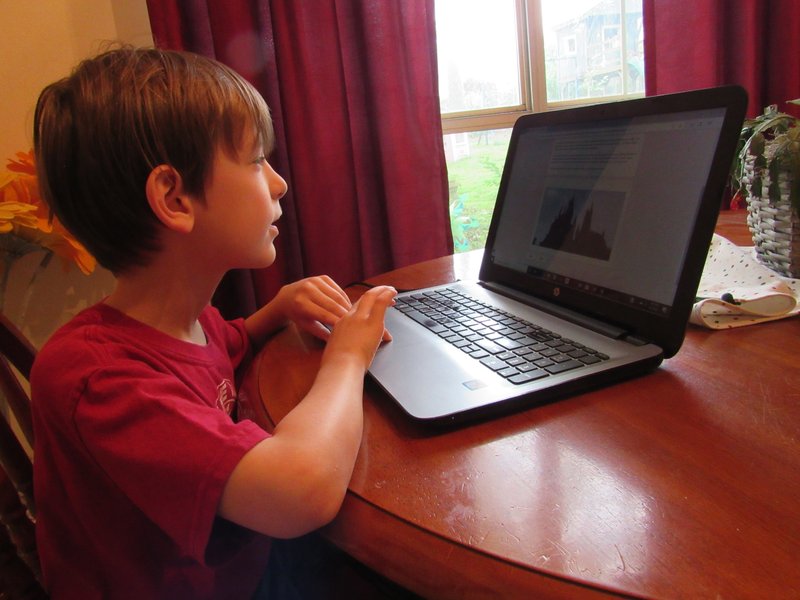 So, you and your children have been self-quarantining for four weeks now and you've been on virtual field trips to the Cincinnati, San Diego and Little Rock zoos, Yellowstone National Park and Mars. You've learned to draw with Mo Willems and Dave Pilkey, and you've listened to online performances of the Arkansas Symphony Orchestra and the Laurie Berkner Band.

After all that screen time, your children will be ready to move around for some hands-on learning. Here are some ideas.

IT'S ALL FORT FUN

We're isolated, but we are also, probably, feeling a little crowded. Maybe we want to be together, but we kind of want our own space, too.

Fort building is fun, and it also requires the flexing of some engineering and design skills. To make a hideaway, kids have to come up with a plan, if only in their heads, and then figure out how to execute it, determining how to get the blankets and pillows to stay in place to create the space they envision.

And they will have to figure out how to repair the damage when these things inevitably fall down.

Then they have to decide what to take inside the fort so it becomes a place in which they want to hang out.

Last week in our house, we had a fort-building challenge. I told my three kids they were in competition to build the best, most appealing forts and that I would be the judge and pick a winner. 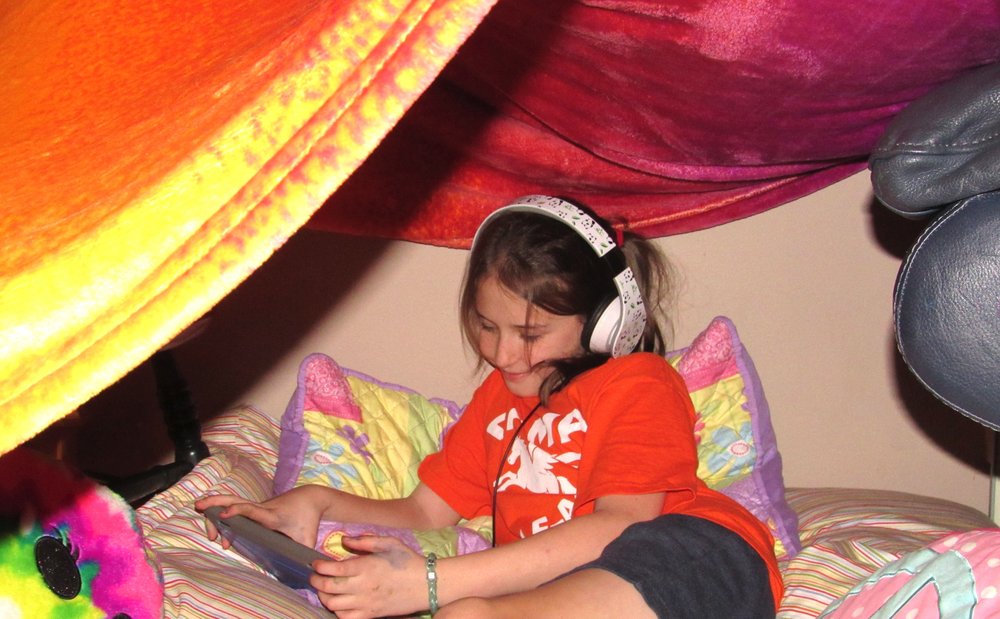 Julianna Dishongh has some quiet time in her fort April 6 after a hard day of crafting. (Special to the Democrat-Gazette/Kimberly Dishongh)

Confession: I had an ulterior motive. I knew that if my kids were using brainpower to make individual forts they couldn't be engaged in hand-to-hand combat. But if you are able to encourage your kids to work together to make one extra amazing fort, they can benefit from the teamwork experience as well.

There are several items in your recycling bin that can be transformed into musical instruments. 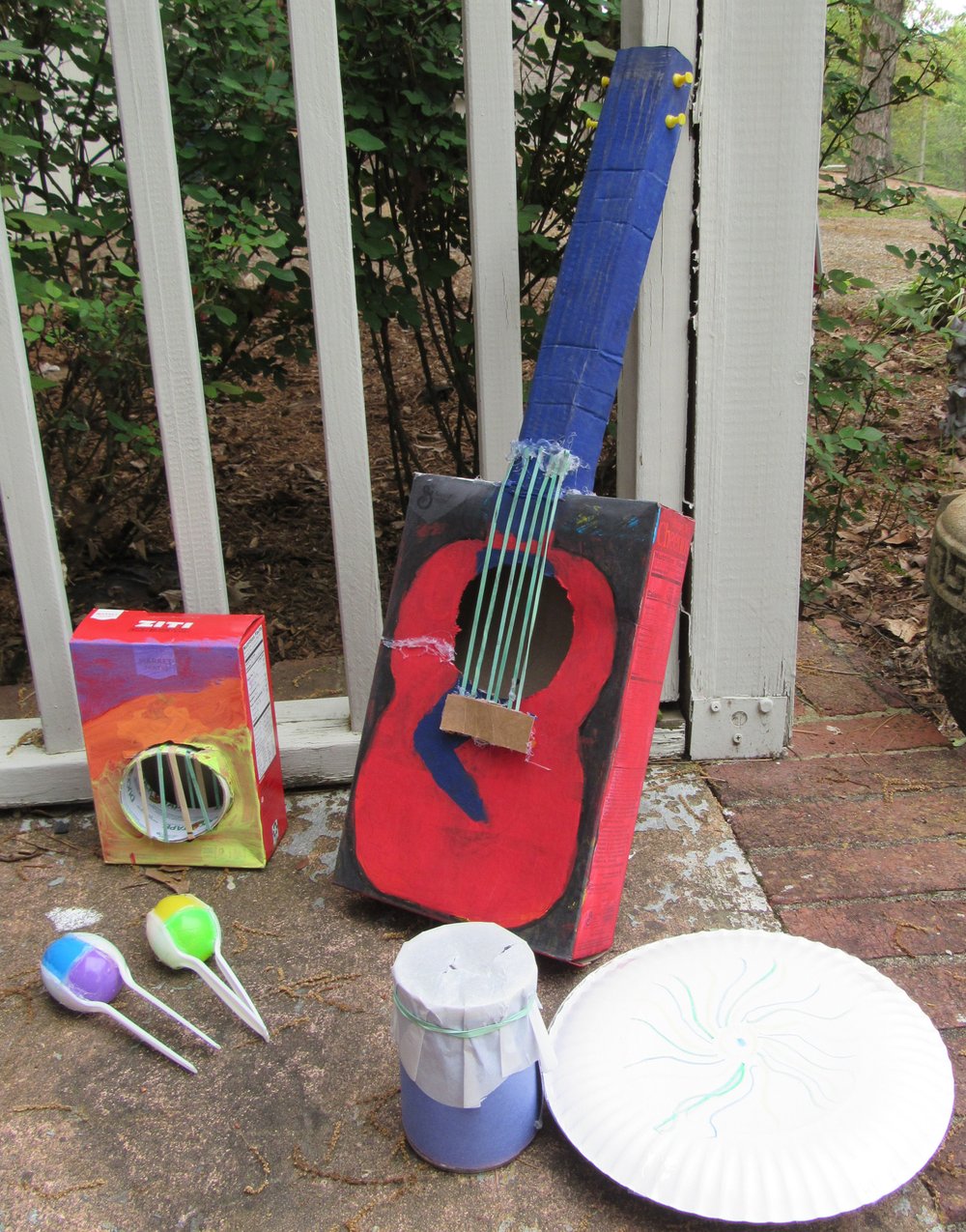 Musical instruments made from household items include (clockwise from far left) Easter egg maracas, pasta box banjo, cereal box guitar, pie pan tambourine and a drum made from a can. (Special to the Democrat-Gazette/Kimberly Dishongh)

Julianna, 10, chose a cereal box. She cut a circle in the middle and painted the silhouette of a guitar around it. She found a long piece of cardboard and attached it to the top of the box, as the guitar's neck.

She cut six rubber bands in half. Then she used hot glue and thumbtacks to attach the rubber bands, spreading them from below the hole to the top of the guitar neck. She carefully stretched some of the bands tighter than others so they make different sounds when plucked.

She used tacks to make frets on the guitar's headstock. She painted the whole thing to look like it belongs on stage.

Next, she made maracas by hot-gluing some plastic Easter eggs filled with plastic beads between pairs of plastic spoons.

She also created a pan flute using straws. She cut the straws diagonally in varying lengths and bundled them in a row using tape and hot glue. She topped her project with a neck band made of some pretty yarn she braided — to hold her flute around her neck so it will be ready at a moment's notice when she wants to blow into it for some tunes.

Charlie, 8, made a tambourine by stapling together an aluminum pie pan and a paper plate, with some whole pecans between them rattling around as noisemakers.

He crafted a drum by spreading parchment paper over the top of an empty can and securing it with a rubber band.

He also made a nice banjo out of a repurposed pasta box. He cut a hole in the middle the size of an empty duct tape roll, and he stretched rubber bands across the roll before tucking it inside. The sound from the strummed rubber bands echoed nicely inside the roll.

I think my kids had as much fun costuming themselves and posing as a rock band when their instruments were done as they did making the instruments, but they did make some nice music.

HOW ABOUT SOME HARRY?

J.K. Rowling has been in the news the last few weeks, first when she granted an open license for teachers to share videos of themselves reading her books on their schools' educational platforms, then as she partnered with the OverDrive online library system to offer complimentary access to an ebook version of Harry Potter and the Sorcerer's Stone in more than 20 languages through the end of this month.

Then she welcomed us all into the wizarding world by unveiling the "Harry Potter at Home" hub at wizardingworld.com.

Visitors do have to create a "wizarding passport" to get onto the site. Once inside, they will encounter the sorting hat, and once assigned to a Hogwarts house, learn about their wand and their patronus.

There are quizzes, history and news about favorite characters, games, puzzles and craft tutorials, such as knitting a Weasley-inspired scarf.

Here's a hint: Her first foray into virtual escape rooms involved preparation for state testing on algebraic concepts. (There is math involved in this escape room, but you don't have to tell your children!)

Krawiec also put together a video tutorial for anyone who wants to create a virtual escape room of their own. Here is that video:

These next few fun ideas are courtesy of Sally Quinn at the Pittsburgh-based Kidsburgh.org, which is supported by the Grable Foundation and the Staunton Farm Foundation.

Kids can make a spiral race track for marbles. 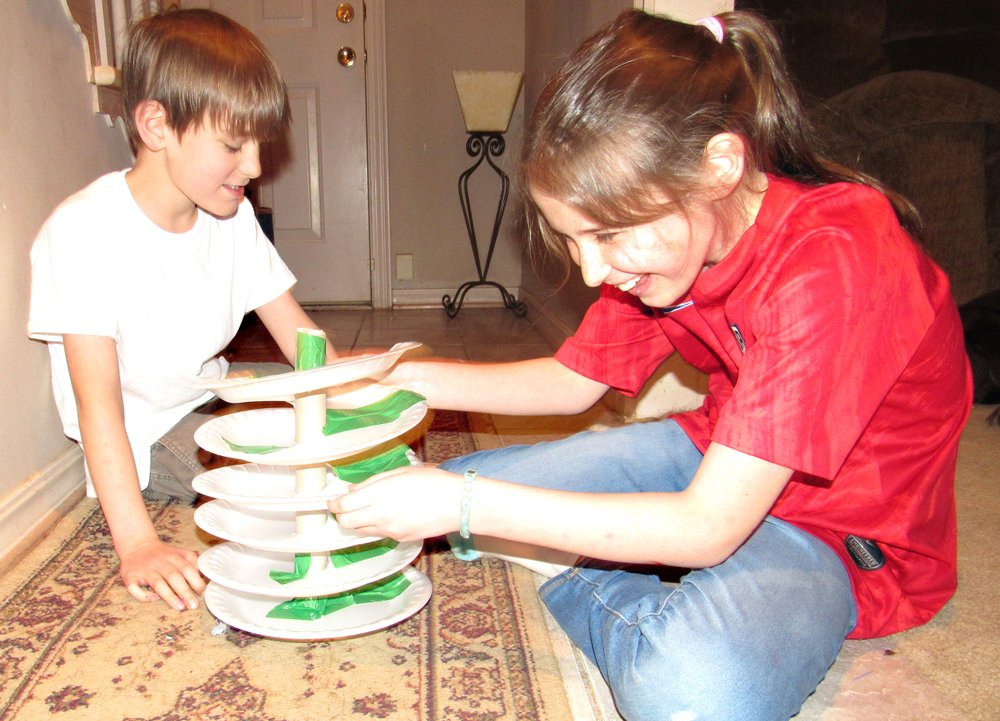 Charlie, 8, and Julianna Dishongh, 10, set up their marble race track in this craft activity for kids stuck at home during the covid-19 crisis. (Special to the Democrat-Gazette/Kimberly Dishongh)

To make this "marble run," grab five paper plates — the kind with a deep rim work best for this project. You'll also need a cardboard tube about 12 inches long (from a roll of paper towels, if you've been able to get any of those lately, or you can cut down a tube from a roll of wrapping paper), and some duct tape.

Hold the tube centered on a plate and trace around its end circumference. Repeat for each plate.

Make a straight cut from the edge of a plate to the center, and then cut out the circle. Repeat on each plate.

Then slide the tube through the middle of the stack and slowly pull the plates away from each other to open space between them, top to bottom, and create a spiral track.

Tape each plate to the tube so the spiral is secure, leaving the bottom plate flat.

When the marble run is complete, drop a marble on the top plate and watch as gravity pulls it all the way down the winding track to the bottom. It could be a race track, with two or more children seeing whose marble — or even toy car — makes it down first.

Pull out a small plate (a pie plate works) and pour enough milk in just to cover the bottom. Drop dots of food coloring throughout. Then add one drop of dishwashing liquid to the milk and watch all those pretty colors suddenly start to swirl. 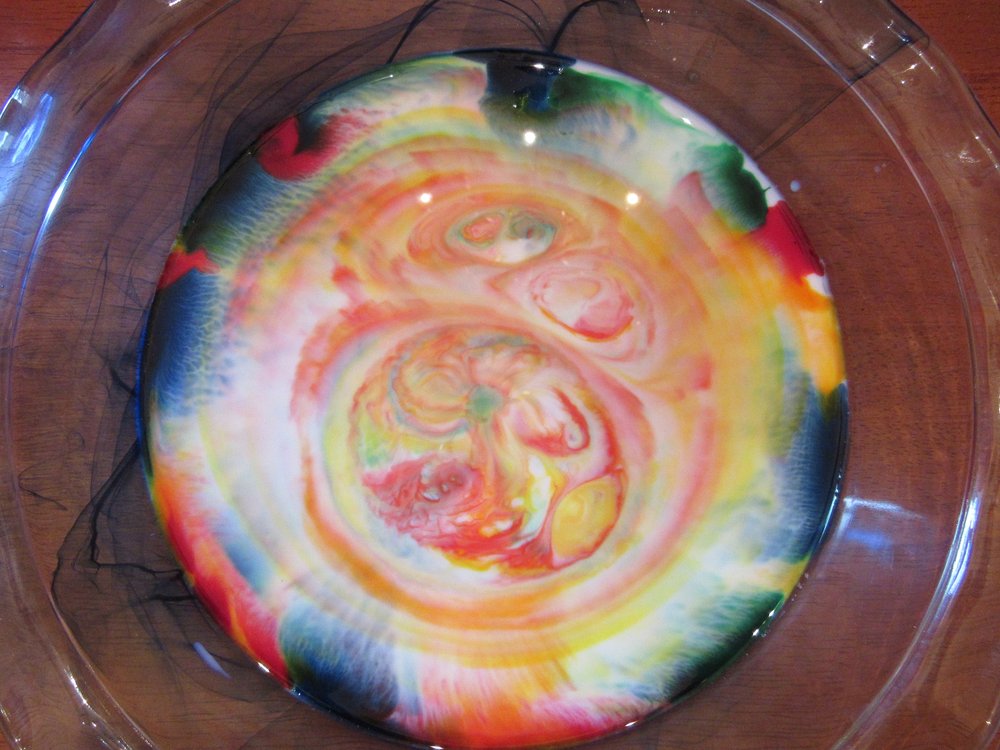 Food colors swirl in a dish of milk as soap comes after their molecules in this science activity for kids stuck at home during the covid-19 crisis. (Special to the Democrat-Gazette/Kimberly Dishongh)

To control how much soap you add at one time, you can dip a cotton swab in the soap and use it to lightly touch the surface of the milk.

There is science behind this: The soap reacts with fat molecules in the milk and the movements of the two together disrupt the surface tension of the milk. The more fat, the longer the motion goes on. The colors make it easy to see the chemical reaction in process.

To make a blooming water lily, cut two paper discs, one slightly larger than the other.

Use markers to color these two floral discs. Cut around the outside of the leaves and the petals.

When each disc is colored and cut out to perfection, lay the smaller one on top of the larger one and — gently — fold the petals over the middle part of the circle. Then fold the leaves inward so they cover the folded petals.

Fill a shallow bowl with water, put your folded lily on the water and watch as the paper absorbs the water and flattens, making your lily bloom. The ink from the paper will disperse into the water, causing it to look something like a real pond.

Don't crease your folds super flat. Watch this video to see why not:

Have your kids roll some Play-Doh into strips and use those strips to outline a maze on a cookie sheet or other flat surface. The maze has to have a beginning and an end, and it should have some interesting nooks and crannies along the way, too.

When they finish, have them grab a straw and blow a pompom — you could also use a cotton ball or even a kernel of popcorn — from the start of the maze to the exit.

Quinn suggests making it a competition for extra fun, using a timer to complete the maze and having your kids try to beat their own records, or each other's.

◼️coffee stirrers or a chopstick

◼️stretchy cord (this is hard to come by right now because so many people are making cloth masks, so feel free to substitute another kind of string)

Cut the paper into 12-inch long, narrow triangles about an inch wide at the base. 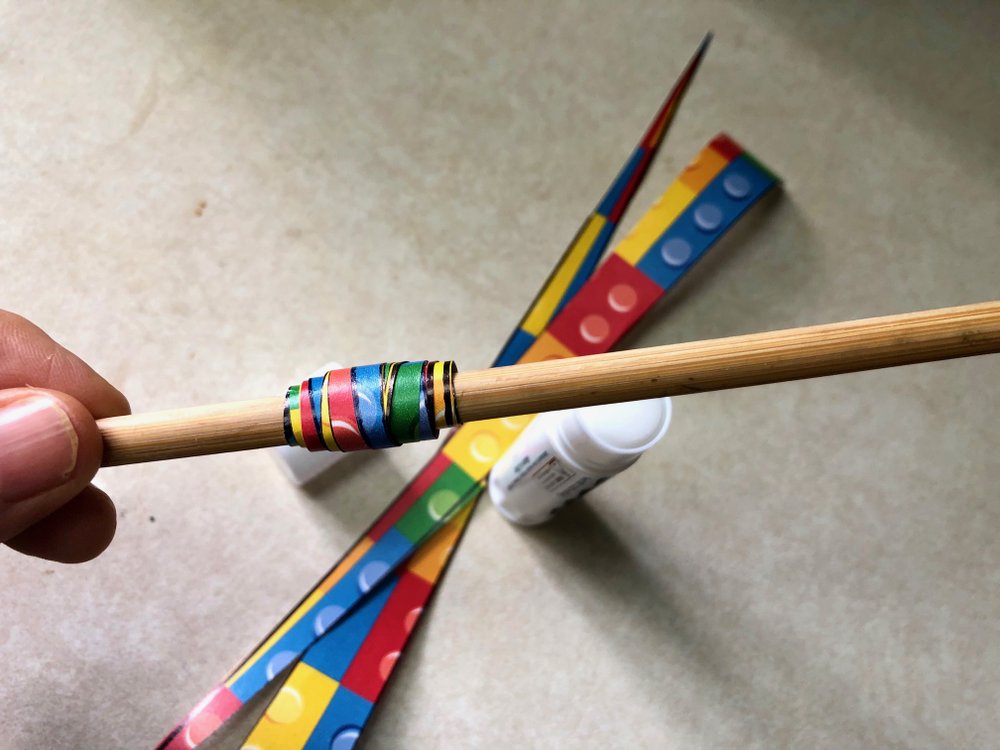 Make as many beads as your heart desires. Each one will look different, even those made from the same kind of paper. String them together (with plastic beads if desired) to make a necklace to show off your creativity. 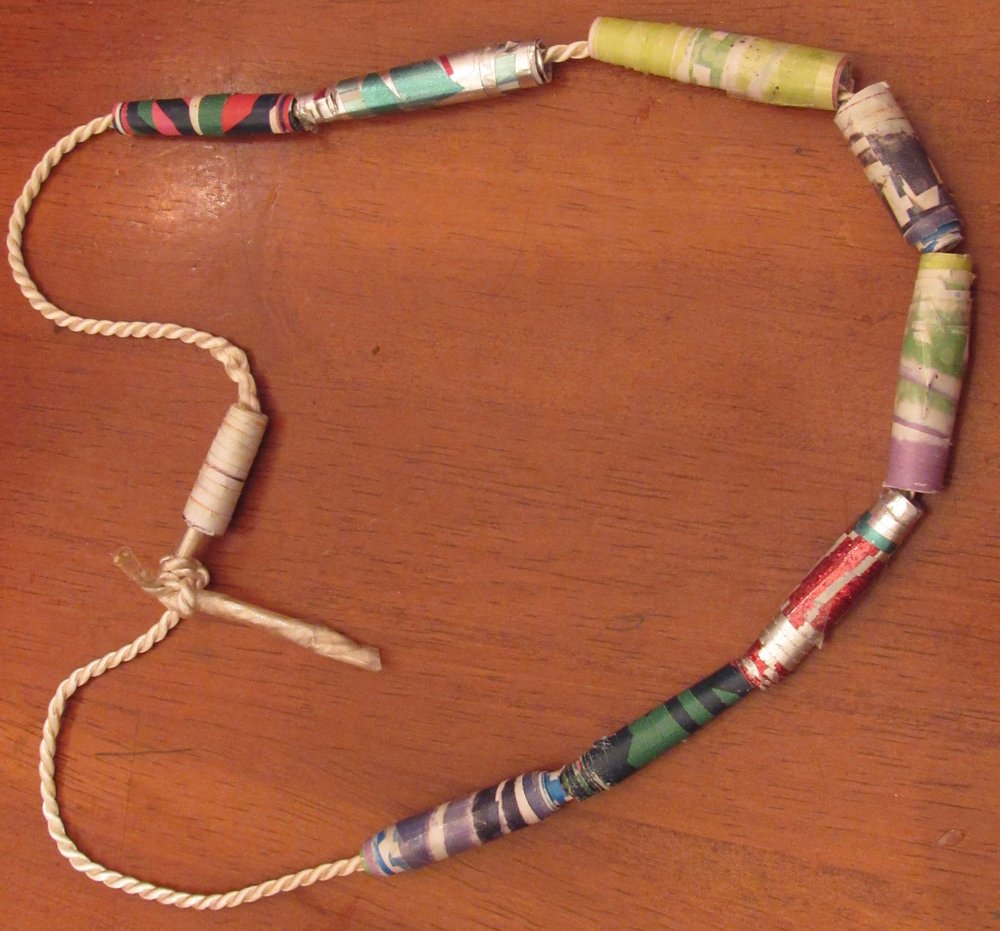 Beads made of scrap paper become a necklace. (Special to the Democrat-Gazette/Kimberly Dishongh)

When you've done all of these activities, your children might be ready to spend some time in the forts they built with a book (or a device, more likely) for some quiet time — for them and for you.