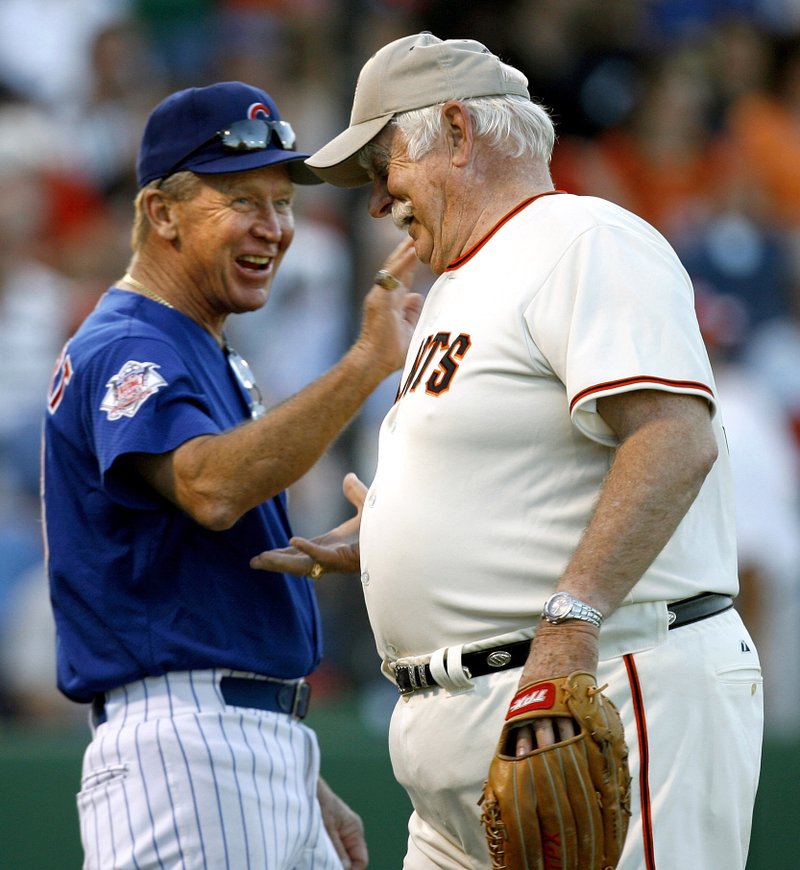 FILE - In this March 25, 2007 file photo, former Chicago Cubs great Glenn Beckert, left, exchanges greetings with Hall of Fame pitcher Gaylord Perry as the pair participate in the Legends of Baseball game at Bright House Networks Field in Clearwater, Fla. Beckert, a four-time All-Star second baseman for the Chicago Cubs in the 1960s and '70s, died in Florida Sunday, April 12, 2020, of natural causes. He was 79. (Joseph Garnett/Tampa Bay Times via AP, File)

Glenn Beckert, a four-time All-Star second baseman for the Chicago Cubs in the 1960s and '70s, died Sunday. He was 79. Citing his family, the Cubs said he died of natural causes in Florida. Playing alongside Hall of Famers Ernie Banks, Billy Williams, Ron Santo and Ferguson Jenkins, Beckert won a Gold Glove in 1968 and made four consecutive All-Star teams for Chicago starting in 1969. He had the best strikeout-to-at-bat ratio in the National League five times and finished third in average when he hit a career-high .342 in 1971. Beckert batted .283 in 11 seasons with Chicago (1965-73) and the San Diego Padres (1974-75). After playing shortstop in the minors, Beckert moved to second base with the Cubs for the 1965 season. The position was open after Ken Hubbs' 1964 death. Beckert then teamed with shortstop Don Kessinger for his entire nine-year Cubs career to form one of the best double-play combinations in baseball.

Doug Sanders brought a flamboyance to golf fashion ahead of his time, a colorful character known as much for the 20 times he won on the PGA Tour as the majors that got away. Sanders died Sunday morning in Houston, the PGA Tour confirmed through a text from Sanders' ex-wife, Scotty. He was 86. Sanders was still an amateur when he won his first PGA Tour event in 1956 at the Canadian Open in a playoff against Dow Finsterwald, and his best year was in 1961 when he won five times and finished third on the PGA Tour money list. But he is best known for four runner-up finishes in the majors, the most memorable at St. Andrews in the 1970 British Open. He only needed par on the final hole of the Old Course to beat Jack Nicklaus, and Sanders was 3 feet away. He jabbed at the putt and missed it, and Nicklaus beat him the next day in a playoff. Sanders also finished one shot behind Nicklaus in the 1966 British Open at Muirfield. He had a one-shot lead going into the final round of the 1961 U.S. Open at Oakland Hills and finished one shot behind Gene Littler, and he finished one shot behind Bob Rosburg in the 1959 PGA Championship at Minneapolis Golf Club.

Florida Atlantic's single-season interception record holder will be making a return to the Atlantic Coast Conference. Cornerback Meiko Dotson announced that he's transferring to Florida State for his final collegiate season after entering the transfer portal in January. Dotson spent his first two collegiate seasons in the ACC with Georgia Tech. During the 2019 season, Dotson recorded a program-record nine interceptions, which was tied with San Diego State cornerback Luq Barcoo for the most in the nation. Dotson redshirted his freshman season with the Yellow Jackets in 2015 before playing two games and recording two tackles in 2016. He played at Garden City Community College in 2017 before transferring to FAU.

Devin Booker won the NBA 2K20 Players Tournament on Saturday night, sweeping Phoenix Suns teammate Deandre Ayton in the best-of-three final. "I played a lot growing up," Booker said. "It's all about timing and eye coordination." ESPN broadcast the three-day, 16-player Xbox One competition. The last NBA games were played March 11, the day Utah Jazz center Rudy Gobert tested positive for the coronavirus. Booker's Houston Rockets topped Ayton's Los Angeles Lakers 72-62 in Game 1 and the star guard directed the Denver Nuggets to a 74-62 victory over the Milwaukee Bucks in the second. Booker earned a $100,000 donation to a coronavirus-related relief effort of his choice. Seeded fifth, he beat Denver's Michael Porter Jr., Washington's Rui Hachimura and the Los Angeles Clippers' Montrezl Harrell to reach the final -- also sweeping those matchups. Ayton topped Chicago's Zach LaVine, Atlanta's Trae Young and the Clippers' Patrick Beverley (Arkansas Razorbacks), using his own Suns to top Beverley in the semifinals. The players were seeded by their NBA 2K player ratings.