Global oil bargain is no cure-all

Deal hinges on market forces driving some out of business by STEPHEN CUNNINGHAM BLOOMBERG NEWS | April 14, 2020 at 1:57 a.m. 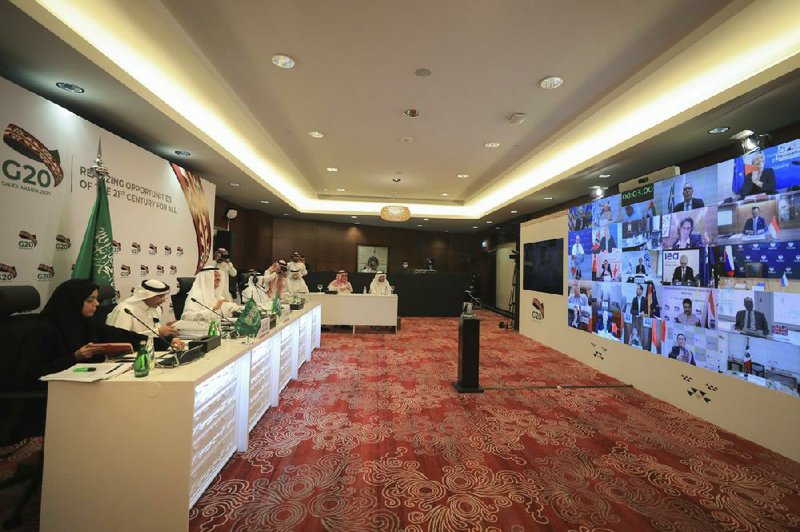 Prince Abdulaziz bin Salman, the Saudi Arabian energy minister, leads a virtual summit of his Group of 20 counterparts Friday in this photo released by the Saudi Energy Ministry. The meeting focused on stabilizing the oil market. (AP)

President Donald Trump said the "big Oil Deal" he brokered will save hundreds of thousands of American jobs. But the agreement hinges on a shale bust that would spell the end for some explorers drowning in debt, bringing a wave of bankruptcies and job losses.

On Sunday, the OPEC-plus group agreed to pare production by 9.7 million barrels a day, ending a devastating price war between Saudi Arabia and Russia. Trump, meanwhile, is counting on market forces to shave some 2 million barrels a day of overall U.S. output by the end of the year.

U.S.-focused oil producers have already slashed more than $27 billion from drilling budgets this year and are starting to shut in production. And almost 40% of oil and natural gas producers face insolvency within the year if crude prices remain near $30 a barrel, according to a survey by the Federal Reserve Bank of Kansas City.

"Trump's strategy seems to rely on the free market forcing production down, and implicit in that is some companies going under," said Dan Eberhart, a Trump donor and chief executive of drilling services company Canary Drilling Services.

Explorers idled 10% of the U.S. oil-drilling fleet, with more than half of the losses in the Permian Basin of West Texas and New Mexico, the heart of America's shale industry, while Concho Resources Inc. said Friday that it and other producers are shutting production.

The deal, reached after days of urgent negotiations, ended a standoff between Saudi Arabia and Russia and belatedly tackled a plunge in demand caused by the coronavirus outbreak. The lockdowns enacted across much of the world to slow its spread have caused consumption to crater by as much as 35 million barrels a day.

After the deal, Goldman Sachs Group Inc. analysts called the deal "too little, too late," and said they expect inland U.S. crude prices to decline further in coming weeks as storage fills up. Prices fell below $10 a barrel in some areas of the U.S. during March because of the collapse in demand, with at least one grade bid at negative prices.

Scott Sheffield, chief executive officer of shale driller Pioneer Natural Resources Co., said he'll testify at a meeting of Texas regulators today to argue for a 20% cut in the state's oil production in May. The OPEC-plus deal to lower output is "not enough" and more is needed from non-OPEC nations including the U.S. to stabilize crude prices, Sheffield said in an interview with Bloomberg Television. Texas should tie cuts to more reductions from G-20 nations, he said.

Oil giants Exxon Mobil Corp. and Chevron Corp., along with most of the other prominent Texas shale explorers, oppose mandated cuts.

Meanwhile, refiners, running out of places to store fuel they can't sell, are cutting back production and turning away crude they don't need, adding to pressure on smaller producers.

Trump's strategy in pressing the Saudis and Russians to agree to sweeping cuts hinged on his oft-repeated claim that U.S. drillers were already scaling back of their own accord in response to the downturn. Some senators from oil-producing states previously raised the prospect of cutting off aid to Saudi Arabia or imposing tariffs on its crude if the kingdom didn't pare output.

Trump has pointed out that the oil could be pumped later. "Well, there's no real cost because we're agreeing to produce a little bit less," he said at a news conference Friday. "It's staying in the ground. You have it. You have it for another day."

Two of the biggest industry trade groups, which opposed the idea of tariffs, expressed support for the deal. The American Petroleum Institute welcomed the "announcement of an agreement by other producing nations to follow the lead of the global marketplace -- and U.S. producers -- to reduce supply to align with lower energy demand as result of the pandemic." The American Fuel & Petrochemical Manufacturers was pleased that a deal was reached that "helps U.S. producers and avoids imposing added costs on U.S. refiners."

With demand destruction outstripping the pledged cuts by a long way, the agreement isn't so much about balancing markets so much as buying time to prevent stockpiles from overflowing, said Kevin Book, managing director at ClearView Energy Partners LLC in Washington.

"The problem shale has is the same problem every producer has -- the low-cost producers will win relative to the high-cost producers, but everyone right now is losing," Book said. "So what does it mean when everyone's losing and you're losing less? Some U.S. producers will weather the storm better than others. I don't think you can paint shale with a single brush."

Information for this article was contributed by Alex Veiga and Damian J. Troise of The Associated Press.