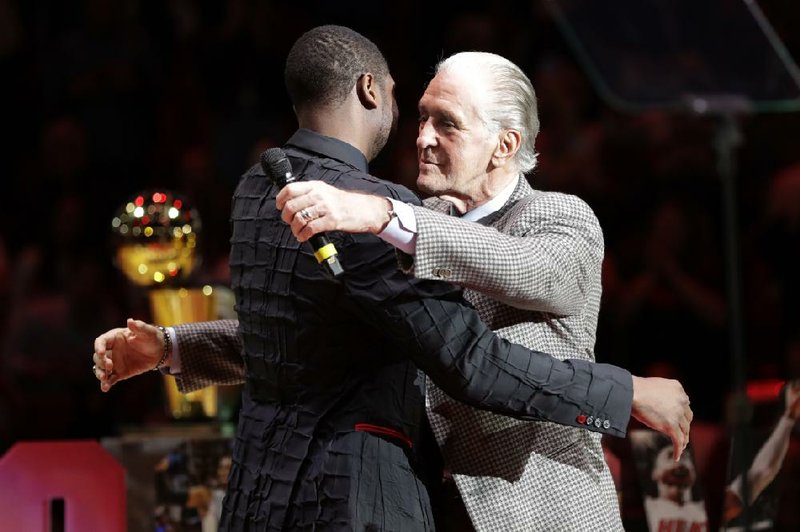 Miami Heat President Pat Riley (right) hugs Dwyane Wade when Wade had his jersey retired Feb. 22. Riley said Wade had a poor draft workout for the Heat in 2003, but his body of work at Mar- quette carried a lot more weight as the Heat drafted him. (AP/Wilfredo Lee)

It has become the NFL's reality, draft judgments to be made next week without a hands-on approach.

Next up could be the NBA, depending on the remaining degrees of separation before its own draft.

As part of pandemic precautions, individual team workouts and in-person draft interviews were halted by the NFL. For the NBA, it is possible the process never starts before draft time, whether that remains June 25 as scheduled, or sometime after Aug. 1, as has become the new preferred approach.

For the Miami Heat, currently slotted at No. 23 in the first-round order, arguments could be made on both sides.

It was during Bam Adebayo's pre-draft workout in 2017 when the Kentucky center, viewed as little more than a shot blocker, defender and rebounder, began to drain three-pointer after three-pointer in front of the Heat hierarchy.

They were sold. This season, one that has Adebayo in the running for Most Improved Player and a spot on one of the NBA All-Defensive team, has told the rest of the story.

But then flash back to 2003, when a guard out of Marquette reported for his workout at AmericanAirlines Arena, and, well, pretty much stunk the joint out.

"I always go back to the Dwyane Wade workout," Heat President Pat Riley said. "He had a horrible workout.

"We still drafted him."

Just shy of two months ago, Wade had his No. 3 raised to the rafters.

The lesson? Workouts matter, but not as much as the body of work that Riley's staff compiles well in advance of those sessions.

Based on the reconfigured schedule created by the new coronavirus, the NBA's annual combine in Portsmouth, Va., for college seniors, the one that had been scheduled for this week, has already been canceled. The Chicago combine for higher-level prospects, scheduled for May 21-24, assuredly will be canceled, as well. That event had provided the official physicals and measurements prior to the draft, as well as a variety of skill testing.

Ultimately, it could come down to getting players in gyms just before a rescheduled draft. Or not at all, with the NBA's current restrictions put into place until further notice.

"The body of work and all the interviews and everything a player's done will transcend a bad workout, a nervous workout, a poor interview," Riley said. "Because by the time they come in, we have enough information.

"It would really take something to change that."

Wade, fortunately, did not.

"By the time a player comes in, the list has almost been made," Riley said of the Heat's annual ranking of the draft's top 60 candidates, the total number of picks in the two rounds.

According to an NBA memo, teams will be allowed to conduct virtual interviews with prospects, but cannot hold in-person workouts or stream live video of players working out remotely. For now, only video from prior to the March 11 shutdown of sports may be utilized by teams during the evaluation process, which excludes videos of recent workouts, similar to the NFL ban.

While limits have been established of four hours of interview time per prospect per team, with no more than two hours of remote video chat per player per week, a delayed draft could still allow a degree of live evaluation and assessment.

Riley said the Wade example stands as proof of not allowing any individual part of the evaluation process to overwhelm the overall process.

So even if individual workouts or group sessions still do eventually come back into play, it is possible minds, by then, might be made up.

To a degree, as they were with Wade.

"That player that we really like and maybe we want to draft," Riley said, "it would take something really bad for us to maybe not draft him."