Governor, mayor urged temporary shutdown due to virus by Compiled by Democrat-Gazette staff from wire reports | April 14, 2020 at 1:54 a.m. 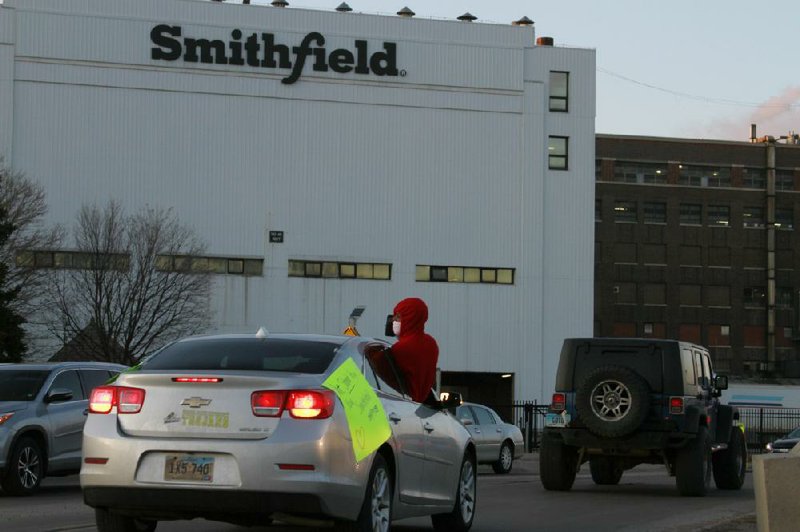 Employees and their relatives protest outside the Smithfield Foods processing plant in Sioux Falls, S.D., on Thursday. The demonstrators complained of unsafe working conditions amid the coronavirus outbreak. (AP/Stephen Groves)

SIOUX FALLS, S.D. -- Virginia-based Smithfield Foods announced Sunday that because hundreds of employees tested positive for the coronavirus, it is closing its pork processing plant in Sioux Falls until further notice -- a step the head of the company said threatened the nation's meat supply.

The announcement came a day after South Dakota Gov. Kristi Noem and Sioux Falls Mayor Paul TenHaken wrote to Smithfield and urged the company to suspend operations for 14 days so that its workers could self-isolate and the plant could be disinfected.

The plant, which employs about 3,700 people in the state's largest city and accounts for 4% to 5% of U.S. production, has become a hot spot for infections. About 730 people in South Dakota have been diagnosed with covid-19, and health officials said Sunday that 40% of them, or 293 people, work at the plant.

"As a critical infrastructure employer for the nation's food supply chain and a major employer in Sioux Falls, it is crucial that Smithfield have a healthy workforce to ensure the continuity of operations to feed the nation. At the same time, employees need a healthy work environment," Noem and TenHaken wrote to the plant's operators.

Smithfield Foods had announced a three-day closure at the plant last week so it could sanitize the facility and install barriers to enhance social distancing. But on Sunday, it announced the plant's indefinite closure.

"The closure of this facility, combined with a growing list of other protein plants that have shuttered across our industry, is pushing our country perilously close to the edge in terms of our meat supply," Smithfield president and Chief Executive Officer Kenneth Sullivan said in a statement. "It is impossible to keep our grocery stores stocked if our plants are not running. These facility closures will also have severe, perhaps disastrous, repercussions for many in the supply chain, first and foremost our nation's livestock farmers."

The shuttered plants and sick workers are adding to other disruptions caused by the virus that's making it harder for food to get from farm to table. Trucking bottlenecks and snarled port traffic have also contributed to empty supermarket shelves.

The Sioux Falls facility is one of the largest pork processing plants in the U.S., Smithfield said. It supplies nearly 130 million servings of food per week, or about 18 million servings per day.

There has been no evidence that the coronavirus is being transmitted through food or its packaging, according to the Agriculture Department.

Other meat processing plants have also closed temporarily because of outbreaks of the coronavirus, including a Tyson Foods facility in Columbus Junction, Iowa, where more than two dozen employees tested positive.

JBS SA, the world's top meat company, will shutter its beef facility in Greeley, Colo., through April 24 amid an outbreak of the coronavirus among plant employees and neighboring communities.

The Greeley facility will wind down operations this week with a diminished staff to ensure existing product in the facility can be used to support food supply needs, the company said in a statement on Monday. The move comes after union officials reported that at least 50 people employed at the plant in Colorado's Weld County tested positive for the coronavirus, with two employee deaths reported from complications related to covid-19, the disease caused by the virus.

Officials intend to bring "this critical part of our national infrastructure on line sooner rather than later," Colorado Gov. Jared Polis said at a news briefing on Monday.

"There's no evidence at all that there's any risk to consumers," Polis said. "It's an issue within the plant."

Sullivan said Smithfield had been operating during the coronavirus crisis because it wanted to sustain the nation's food supply.

"We believe it is our obligation to help feed the country, now more than ever. We have a stark choice as a nation: we are either going to produce food or not, even in the face of covid-19," he said.

Maggie Seidel, Noem's senior adviser and policy director, said in an emailed statement Sunday that science and data support a 14-day closure to slow the spread of the virus.

"Obviously, the situation is dynamic and changing by the day. The industry (like the country) needs to fight its way through this situation -- and it will -- and make adjustments as it changes," Seidel wrote. "As a critical infrastructure industry in our nation's food supply, the Governor is committed to working with them to get through this."

Smithfield said there will be some activity at the plant today to process product that's already in inventory. It will resume operations in Sioux Falls after receiving further directions from local, state and federal officials. The company said it will continue to pay its workers for the next two weeks.

There had been six covid-19-related deaths in South Dakota as of Monday afternoon.

Some companies also had to slow down plants that are set up to supply restaurants, instead of supermarkets. Joe Sanderson -- the CEO of Sanderson Farms Inc., the United States' third-largest chicken processor -- said earlier this month that plants that process big birds for the food-services industry would run "well below capacity."

Information for this article was contributed by staff members of The Associated Press; and by Isis Almeida, Matt Day, Vincent Del Giudice and Michael Hirtzer of Bloomberg News.