Arkansas State safety Antonio Fletcher (left) works out in the garage at his house in Lithonia, Ga., to stay in shape. Fletcher said the hardest part of staying in shape is knowing what type of shape to be in. “We don’t really know what’s in shape for the season, so everybody’s trying to really work with their own limits,” Fletcher said. (Democrat-Gazette file photo)

There he stood alone in his garage. A shirtless Antonio Fletcher grasped old rusty 45-pound barbell plates and performed different lifts as gospel music blared from a speaker.

Just how does a college football player stay in shape these days when spring camp has been lost, the team facility is effectively off limits and pretty much any public gym around is closed? 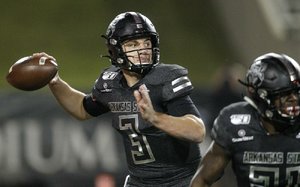 Standing next to a parked motorcycle and staring out at his driveway, this was partly how Arkansas State's 6-0, 187-pound junior starting safety has worked out. Fletcher tweeted the video April 7, one of many clips he's posted on Twitter recently showing how he's continued to train through the coronavirus pandemic.

"I feel like the hardest part of trying to stay in shape right now is knowing what is in shape for football season," Fletcher told the Arkansas Democrat-Gazette. "We don't really know what's in shape for the season, so everybody's trying to really work with their own limits."

As the coronavirus' stranglehold on society continues, athletes at all levels -- and teams -- are trying to figure out creative ways to stay fit and stay strong.

"Some have facilities at their home that are available, some don't have anything, so we're having to give them multiple options ... just to try to keep them as mobile and as active and give them a chance to relieve stress and kind of stay in some type of rhythm and some type of pattern to what they're used to," Anderson said.

Fletcher's garage workouts from his house in Lithonia, Ga., which is just a short drive east of downtown Atlanta, are a good start. He also works on a number of agility drills at nearby fields. Sprinting and cutting every which way, backpedaling and turning his hips and running -- each imperative for a person who spends his time every fall in the secondary.

Fletcher -- who missed all of ASU's shortened spring camp due to recovery from shoulder surgery in January -- will often send videos to his two trainers in Atlanta so they can provide feedback on his technique. Occasionally, some of his videos appear on his Twitter account, too.

"I [have] been in the lab everyday so why stop now?" Fletcher captioned with a tweeted video on April 10.

Fletcher's teammate, redshirt sophomore quarterback Layne Hatcher, hasn't revealed any drills or workouts on Twitter lately like he has, but Hatcher has developed his own routine while he's back in his native Little Rock.

Staying sharp can be a bit more challenging for quarterbacks right now. Someone has to be there to catch the ball -- and preferably someone who's used to doing it.

Hatcher said he throws six days a week. It was happening at Joe T. Robinson High School's field, which has recently been shut down, so now he's resorting to some open fields near his house.

"I can kind of rotate them around, depending on how their legs feel," said Hatcher, the reigning Sun Belt Conference Freshman of the Year. "Usually all three of them, or at least two of the three, are there."

Hatcher's weeks are also spent drawing up different plays and defenses on "quarterback worksheets" sent out by ASU offensive coordinator and quarterbacks coach Keith Heckendorf, as well as watching film from last season.

He's still able to work out with his personal trainer, Robert Farqua, who runs a private training facility in the area suited for one-on-one instruction that has been allowed to stay open.

Hatcher -- who was once dubbed the "Layne-iac" by former ASU receiver Omar Bayless for his work ethic -- said he works out about three times a day and six, sometimes even seven, days a week, either with Farqua or on his own.

"I feel like honestly I may be getting in more work physically [than normal] just because I get bored sometimes," Hatcher said.

Every morning, Monday through Friday, Fletcher lifts with the limited weights he has in his garage. These are the same weights he used "to try to get scholarships." He has his own bench and bar, too, so the bench press hasn't yet become a foreign concept, though the most weight he's able to do with what he has is 225 pounds.

It's far from what he and his teammates would normally be doing back in Jonesboro, but for Fletcher, it's enough to maintain.

Each afternoon, he's at a local field, usually at the nearby elementary school or high school stadium, to work on drills by himself. One surface is grass and the other's is artificial turf, and Fletcher likes to switch it up. In the evenings, he said he'll even do some yoga.

And then there are the frequent, often sporadic, breaks in the day to do push-ups -- lots of them. Fletcher said he's in an "accountability group chat" with fellow ASU teammates Jarius Reimonenq, a sophomore cornerback, and Josh Edwards, a redshirt freshman running back.

All it takes is for one person to randomly text, or call and say, "50 push-ups," and then it's on.

"We'll all like FaceTime each other and do 50 push-ups, then we'll hang up," Fletcher said.

Even in a pandemic and with the football season's future uncertain, Fletcher believes in staying ready.

"I know for a fact I'm gonna work every day to try to keep myself where I need to be," Fletcher said. "I don't want our other safeties to be slacking and feel like this is just a break, or halftime. It's like, we still got to go."