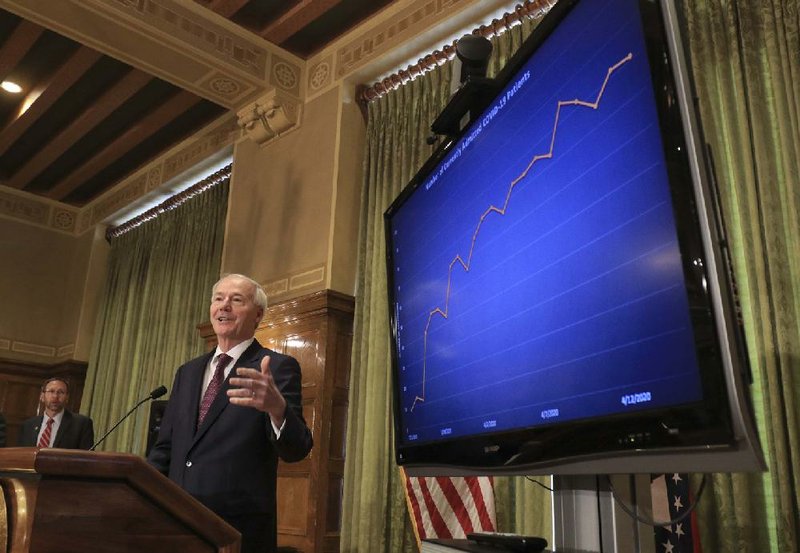 Gov. Asa Hutchinson said during Tuesday’s briefing that he saw President Donald Trump’s claim of final say on social distancing guidelines as “part of his leadership style,” of how “he likes to gig a little bit and how he likes to create a little controversy.” More photos at arkansasonline.com/415governor/. (Arkansas Democrat-Gazette/Staton Breidenthal) ( Arkansas Democrat-Gazette / Staton Breidenthal)

A day after President Donald Trump asserted that he has "total" authority to decide when to reopen the economy, Gov. Asa Hutchinson said decisions in Arkansas will be "based upon the best public health advice" and the needs of Arkansas residents.

The Republican governor spoke as the state's death toll from covid-19 rose by two, to 32. From Monday evening to Tuesday afternoon, the number of confirmed cases increased by 23, to 1,498.

"Arkansas has positioned itself to fight this battle for the long haul, and we understand this is not a 30-day battle or a 60-day fight, but it will continue in some fashion, into the future," Hutchinson said. 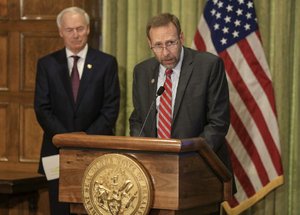 Initially billed as "15 days to slow the spread," social-distancing guidelines by the White House coronavirus task force originally had been set to expire at the end of March and were then extended to the end of this month.

Even before those guidelines were issued, however, Arkansas and other states had been imposing restrictions designed to slow the spread of the virus.

Hutchinson said he interpreted Trump's assertion Monday as "him expressing himself in his normal fashion" and "with an understanding of President Trump and how he likes to gig a little bit and how he likes to create a little controversy, and that's part of his leadership style."

He said Arkansas has been working with the federal government on its response.

"We do need to have continued national guidance," he said. "We don't want to isolate ourselves and do something totally different in Arkansas that impedes our commerce and our interchange with other states."

But he added that the Trump administration gave states "flexibility" in responding to the pandemic.

"We've been on our own in terms of trying to round up [personal protective equipment] for our hospitals," Hutchinson said.

The federal government "has been a backstop for us, but it hasn't been sufficient."

Just as governors in eastern and western states have announced plans to coordinate the easing of restrictions, Hutchinson said he will be speaking with other governors "so we can try to come out of this together as a region and as a nation."

"We value the role that we have, and our founding fathers in our country appreciated the role in the 10th Amendment that the governors have," he said, referring to the amendment that gives states authority over certain matters not delegated to the federal government.

In a further step aimed at slowing the spread of the virus, Arkansas' government Tuesday began using electronic highway signs near the state's borders to warn motorists about directives barring hotels and motels from providing lodging to recreational travelers.

Portable, trailer-mounted signs, say, "No rec lodging for out of state traveler," with the message spread across two different signs.

"We want to eliminate the recreational travelers from coming from out of state into Arkansas," Hutchinson said.

He noted that Arkansas has a lower number of confirmed cases and deaths per 100,000 residents than its surrounding states.

Shelby County, Tenn., home to Memphis, had 1,359 cases as of Tuesday afternoon. Just across the Mississippi River, Crittenden County, where West Memphis is, had 116 cases, the second-highest total of any Arkansas county.

Other measures in Arkansas have included closing public schools; limiting restaurants to takeout and delivery orders only; closing hair salons, movie theaters and other businesses; and prohibiting indoor social gatherings of more than 10 people.

One allows emergency response workers and other health care personnel who become infected with the coronavirus while carrying out their duties to seek workers' compensation benefits, even if the infection wasn't associated with work at a hospital, as state law normally requires in such cases.

The other provides immunity from lawsuits for physicians, physician assistants, specialist assistants and nurses providing medical care to patients with covid-19, the illness caused by the virus.

"We don't want them to worry [while] performing their responsibilities in emergency circumstances, about being sued," Hutchinson said.

He said state officials no longer expect the state to reach a peak of 1,000 covid-19 hospitalized patients in early May, as they predicted last month.

On Tuesday afternoon, 81 Arkansans were hospitalized, up from 74 a day earlier.

Hutchinson said he's hoping hospitalizations have reached a plateau. Unless "something just goes totally haywire," he said, the state's hospitals should have the capacity to handle its coronavirus patients.

"I was presented with an option as to having to build field hospitals in preparation for a very high level of peak hospitalizations," he said. "We're not going to do that, based upon where we see the peak going.

"Even though we're not to the peak yet, we are confident that we're not going to reach those high levels of numbers."

Reports from the Pulaski County coroner show that two of the state's recent covid-19 deaths were linked to nursing homes, bringing the number of such deaths in the state to eight.

Willadeen Glover, 95, on Monday night became the fourth resident at Briarwood Nursing and Rehabilitation Center in Little Rock to die after becoming infected with the virus, the reports show.

Harry Drabelle, 78, died at a hospital Tuesday morning after testing positive for the virus at The Lakes at Maumelle Health and Rehabilitation, according to a report.

Coroner's reports noted that Glover had a history of anxiety and hyperthyroidism and that Drabelle had dementia and chronic obstructive pulmonary disease.

Health Department Secretary Nate Smith said a total of 93 nursing home residents in the state, and 71 nursing home workers, had tested positive for the virus as of Tuesday morning.

Twenty-eight nursing homes have at least one worker or resident who has tested positive, Smith said.

Facilities assign teams of workers to care exclusively for residents who test positive to avoid spreading the virus, she said.

"The high number of cases reported in long-term-care facilities across our state is a reflection of our facilities who care deeply and have invested in proactive testing of all residents and staff upon the discovery of a case related to the facility," Bunch said in an email Tuesday. "As a result, hundreds of people have been tested who either live in long term care or work in long term care that were asymptomatic and would not have been tested otherwise."

Under a Health Department directive, nursing homes since March 13 have banned visitors for 30 days unless the visit was medically necessary, or by law enforcement or certain other officials.

"Outbreaks are not the result of inattentiveness or a shortcoming in nursing homes," Bunch said. "It's the combination of the behavior of this virus and the type of conditions the people we care for have: an extremely vulnerable population who is typically elderly with many underlying health conditions.

"Also, this virus spreads between people who do not show symptoms so even when you do everything correctly, it can still spread quickly."

Despite the large number of cases, Smith said the number of deaths at nursing homes in Arkansas has been low compared with other states, which he attributed to aggressive investigations by the department.

He said his department has been increasing the number of personnel assigned to conduct such investigations in nursing homes, prisons and elsewhere.

The staff has grown from three nurses to more than 100 people, and Smith said he hopes to add 50 or 60 more.

A state website Tuesday indicated that since Monday evening, the first covid-19 death in Lee County had been recorded, and the number of such deaths had increased from four to five in Jefferson County.

Smith said one of the people who had died most recently was over age 65, and the other was younger.

From Monday morning to Tuesday morning, the number of health care workers who had tested positive increased by 13, to 206, Smith said.

Sixty-five of the workers have recovered from their illnesses, meaning at least a week has passed since they fell ill and they haven't had a fever for at least three days.

The Health Department was continuing to investigate an outbreak at the state's Cummins Unit in Lincoln County, where 44 inmates had tested positive as of Monday, but hadn't found any new cases Tuesday, Smith said.

At the Central Arkansas Community Correction Center, the number of inmates who have tested positive increased from five to 17, while the number of confirmed cases among the staff remained the same, at 27.

[Video not showing up above? Click here to watch » https://www.youtube.com/watch?v=QF-ubEcFzcA]

The number of people in the state listed as having recovered increased by 17, to 444.

Information for this article was contributed by Eric Besson and Bill Bowden of the Arkansas Democrat-Gazette.