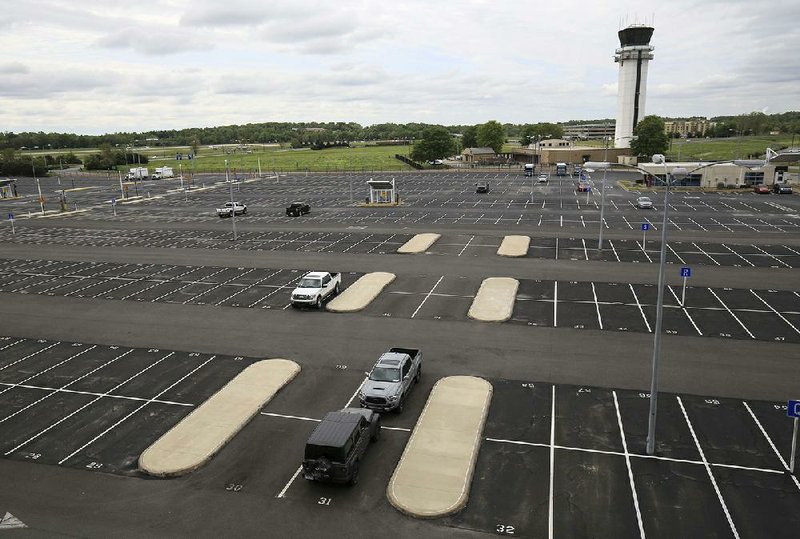 Passenger traffic at Bill and Hillary Clinton National Airport/Adams Field has plunged more than 90% and led to layoffs and service reductions by airlines and other tenants, a collapse mirrored at airports around the nation as a result of the coronavirus pandemic.

On Tuesday, the state's largest airport had 17 outbound flights scheduled when normally there would be about 45, said Shane Carter, the Clinton National spokesman.

And those flights are carrying a fraction of the passengers they carried just a few weeks ago. On Monday, 153 passengers boarded flights, Carter said. On a typical day, the airport has 2,500 passengers.

That has translated into a precipitous drop in airport revenue, or about $1.8 million per month, according to Bryan Malinowski, the airport's executive director.

Parking is Clinton National's largest source of nonaviation revenue, collecting $10.1 million in parking revenue in 2019, or an average of nearly $27,500 daily. Last Thursday, the airport collected $772 in parking revenue, which is reflected in the handful of vehicles sitting in the lots that offer 3,500 spaces.

Valet parking and shuttle services have shut down. There is no more curbside baggage handling or check-in. It isn't a given that airlines staff the ticket counters. The airport cautions passengers to get in touch with airlines before arriving.

"We are in unprecedented times," said Tom Clarke, the newly installed deputy executive director for Clinton National. He previously was the airport's properties, planning and development director.

With few people flying and pandemic protocols that no longer permit dining at restaurants, business inside the airport has all but evaporated.

Only one restaurant, the Great American Bagel Co., and one of the three Hudson retail outlets remain open on the concourse. Chili's, Chick-fil-A and Burger King are closed. Even the popular Starbucks in the baggage area is closed.

Northwest Arkansas National Airport at Highfill has experienced similar numbers. The company that operates its food, beverage and retail outlets has reduced employment from 70 to three.

Clinton National staff members have moved to provide some relief to airport tenants, recommending that some contractual guarantees be suspended, including a minimum annual guarantee, which is paid monthly. For Host, the airport's food and beverage concessionaire, that amounts to $47,500 a month.

Under the relief, which was recommended Tuesday by the Little Rock Municipal Airport's lease and consultant selection committee, Host likely will pay no more than $3,600 a month, based on the company's current daily revenue of less than $1,000, Malinowski said.

Host completed more than $3.3 million in renovations in 2018 to upgrade its offerings at the airport. Hudson invested an additional $1.25 million, according to the airport.

But Bill Walker, one of the lease committee's three members, objected to the relief measure because he said the businesses are eligible for federal pandemic relief, including the paycheck protection loan program. Under that program, businesses can apply the loan to payroll costs, mortgage, rent and utilities and eventually have the loan forgiven.

He won assurances that Malinowski would check to see whether any of the affected businesses had participated in the relief programs.

Meanwhile, the Federal Aviation Administration said Tuesday that it is providing up to $51 million in coronavirus-related aid to nearly 100 of the state's airports.

About half, or $25.1 million, is designated to Clinton National, according to a list of grants available to almost every airport in the United States.

"We're very grateful to hear that we'll be receiving funds in response to the [pandemic] recovery," Carter said. "At this point, we haven't received any details other than what was included in the media release that was sent out earlier today."

Fort Smith Regional Airport is in line for $11.6 million and Northwest Arkansas National is scheduled to receive $8.2 million.

Other airports receiving significant grant amounts include Hot Springs Regional, $2.95 million, and Texarkana Regional, which is to get $1.1 million.

Paul Mehrlich, the Texarkana airport's executive director, welcomed the money and said his airport was hanging on. American Airlines, as part of a separate federal aid package for airlines, had asked for a federal waiver from providing daily flights to a small number of airports.

It still provides two flights per day to Texarkana but has the latitude to reduce to three flights per week, which is still better than no service at all, Mehrlich said.

"We are no longer worried we are going to lose the airline," he said.

More than 75 other smaller airports in Arkansas are receiving amounts ranging from $1,000 to $69,000, according to the FAA.

The money is from a pool of $10 billion in federal grants to airports ordered by Congress in a $2 trillion aid package that the U.S. Department of Transportation said Tuesday is ready for delivery.

Transportation Secretary Elaine Chao said the money is being sent as soon as possible to help the industry that has seen a reduction of more than 95% of airline passengers.

"This $10 billion in emergency resources will help fund the continued operations of our nation's airports during this crisis and save workers' jobs," Chao said in a statement.

The money can be used for payroll, utilities, debt payments and capital expenditures. The normal process that requires airports to spend a portion of their own money on projects funded under such grants is being waived so that the funds can go directly to helping airports, the Transportation Department said.

Atlanta's Hartsfield-Jackson International, the biggest U.S. airport, will get the largest grant at $338.5 million.