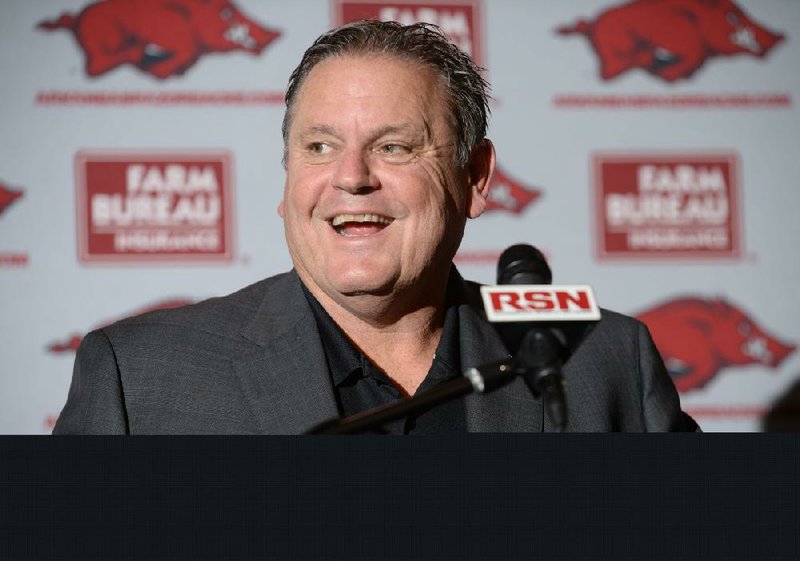 In normal times, new Arkansas football coach Sam Pittman would have his 10 assistants all over this state and watching prospects in spring practice and visiting with high school coaches.

But as we all know, the beginning of this spring has been anything but normal with all the coronavirus concerns, no school and no practice.

Still Pittman and his staff have managed to stay in contact with coaches via phone calls and texts and also were able to get their message of cooperation to nearly 1,000 coaches attending the Arkansas Football Coaches Association Clinic in Hot Springs in early February.

Pittman brought all 10 assistants and stressed all would be recruiting Arkansas instead of just one single coach as has been the case in the past.

Little Rock Parkview coach Brad Bolding had what he considered the honor of introducing Pittman as the featured speaker of the clinic.

"It was great," Bolding said. "I got to meet all the coaches and they were all down to earth and every one of them got up and spoke two or three minutes and talked about this is the area of Arkansas I am going to be covering and I can promise you are going to know me and I am going to be in your school.

"Then the coordinators got up and led some of the clinic and Coach Pittman was great. I thought it was pretty cool and they set a great tone for wanting to work with us."

Bolding was a big fan of Pittman's when he was an offensive line coach at Arkansas from 2013-2015.

"Man, I love the guy," Bolding said. "I think he is a player's coach and I always appreciate that. I think that is what I am as well so I just hit it off with him. I worked a camp with him up at Arkansas a few years ago and worked with the offensive line and just had a blast.

"He is the kind of guy that you could just hang out with and visit with all day. He never big times you and he is just down to earth. I thought it was a great hire."

Pittman's hire was a surprising move to many, but he has earned praise since coming on board from those in the college football world.

"Richard Davenport (Arkansas Democrat-Gazette recruiting writer) reached out to me and a bunch of other Arkansas high school coaches and I don't know that anybody said Sam Pittman," Bolding said of the hire. "But when they named him, I thought that is a really good hire, an excellent hire.He is very well-respected in the coaching profession and has done a great job of hiring coaches.

"Everybody has just got to be patient. In this microwave society we live in, just let him build it and Arkansas football is going to be back to where we need it to be in no time."

Bolding, who was previously a successful coach at North Little Rock, believes it is important to build the Razorback program with players from the state of Arkansas.

"I have had several players play up there with Martell Speight, Juan Day and several others and I have always asked them 'what's the deal?' Bolding said. "They have always said that the program was always the most successful when we have a lot of Arkansas kids playing for us.

"When we go back and look at it, the last time we were in the (2011) Sugar Bowl playing Ohio State and had the opportunity to beat Ohio State, we were winning games that year with kids that were from Arkansas. They had a lot of pride that believed in Arkansas football."

Those former North Little Rock players told tales of Razorbacks who did not have the passion for the program and the state as they did.

"I was talking to Spaight, Day and Tyler Phillips and they would say 'you get this guy from South Florida to come in here and he doesn't give two cents about the Razorbacks, he just wants to hopefully get a degree and get on to the NFL and he is just using it as stepping stone. There is no pride there.'"

"There has been a lot of things that have happened since that day and that is what I think this hire was so important. Things like having all those coaches really recruit the state of Arkansas is really going to be something that really brings back that spirit that we all remember."