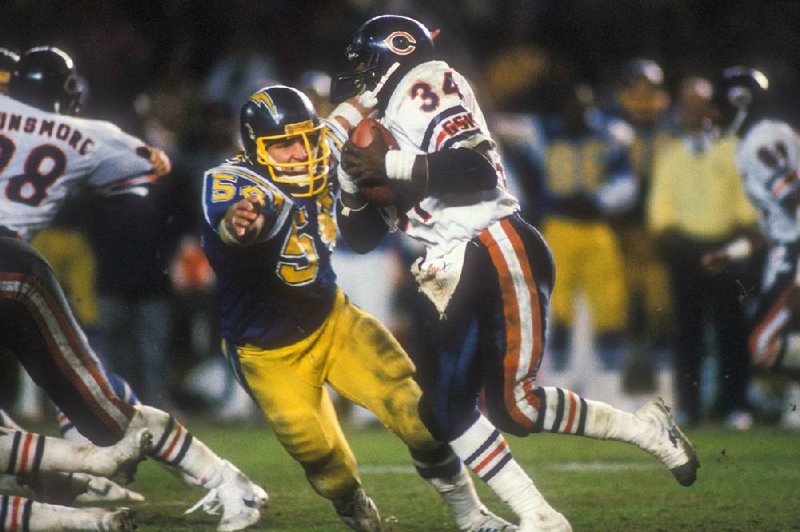 Billy Ray Smith (left) played his entire career for the then-San Diego Chargers and was named as one of the 50 Greatest Chargers in 2009. (Photo courtesy of Los Angeles Chargers)

The Arkansas Democrat-Gazette decided to tackle a fun project in the lead up to the basement-style, socially distant NFL Draft starting April 23.

The concept was simple: Who are the best former Arkansas Razorbacks to play professional football?

The execution was a little more difficult.

Darren McFadden, a 2019 inductee into the National Football Foundation College Hall of Fame, might be the best Razorback to play college football, but was his professional career good enough to make the list?

In the days leading up to the draft, we will present a list, in descending order, of the 10 best Razorbacks to play in the professional ranks. This list was compiled after consultation with media members, coaches and assistant coaches who are familiar with Arkansas' all-time roster.

At the conclusion of the Top 10 countdown, we'll present an all-time Razorbacks in the pros starting lineup.

Did your favorite former Hogs make the team?

FAYETTEVILLE -- Billy Ray Smith Jr., a legacy Arkansas Razorback and kingpin on strong University of Arkansas defenses in the early 1980s, is one of the all-time great San Diego Chargers.

The son of defensive lineman Billy Ray Smith Sr., the Fayetteville-born and Plano, Texas, native is an appropriate choice to kick off the Arkansas Democrat-Gazette's list of the top 10 Razorbacks of all time in pro football.

Smith was a defensive lineman for the Razorbacks, playing both inside and out, and he earned consensus All-America honors in 1981 and 1982.

He is still atop the Arkansas record book in a stat category that might have a wider gulf between himself and the No. 2 guy than any other statistic.

Smith was selected as a team captain as a senior in 1982 and helped the Razorbacks to a 9-2-1 record.

Those Razorbacks edged Florida 28-24 in the Bluebonnet Bowl on Dec. 31, 1982, at the Astrodome in Houston. That marked Arkansas' first and only victory over the Gators until the 2016 team upset No. 11 Florida 31-10 in Fayetteville.

Smith was taken in the first round of the 1983 NFL Draft with the No. 5 pick by the Chargers, with whom he spent his entire 10-year professional career. He was the first defensive player taken in that draft.

For most of his career, Smith was a standout linebacker on a mediocre team which had four last-place finishes in the AFC West during his first nine years in the league. The Chargers' best record during Smith's first nine seasons was 8-7 in 1987.

He was selected as the team MVP that season and was the Chargers' defensive player of the year in 1985 and 1986. The last of those two seasons he posted a career-best 11 sacks.

However, Smith went out with a bang in 1992, his only season to overlap with NFL Hall of Fame linebacker Junior Seau.

The Chargers won the division that year with an 11-5 mark under first-year Coach Bobby Ross and defeated division-rival Kansas City 17-0 at home at Qualcomm Stadium in the wild-card round of the playoffs. The Chiefs had swept two games from San Diego in the regular season.

Smith's final team with the Chargers also carries the historic footnote as being the only NFL team to open a season 0-4 and qualify for the playoffs.

In 2009, the 50th anniversary of the Chargers' franchise, Smith was chosen by a group consisting of Chargers Hall of Famers, a panel of local media members and fan voting to a list of the 50 Greatest Chargers.

Smith, like his father, was a member of Arkansas' All-Century team selected in 1994. He was inducted into the Arkansas Sports Hall of Fame in 1995, the UA Hall of Honor in 1997, and the College Football Hall of Fame in 2000.

The NFL was not keeping official tackle stats during Smith's career or he would clearly rank near the top of that category among former Razorbacks in the professional ranks. He was credited with 26.5 sacks and 15 interceptions in his 126 career games.

Smith married San Diego news anchor Kimberly Hunt in 1991 and embarked on a career in the media after retiring from the Chargers. He and Scott Kaplan have been a long-time broadcasting team in San Diego and still host the Scott & BR Show.

"I get to talk about sports on the radio for a job," Smith told Ranch & Coast, a San Diego lifestyle magazine in 2013. "Come on, how can you beat it? Getting to talk to the people in San Diego who want to call in and want to talk about [sports]. It's the best thing ever." 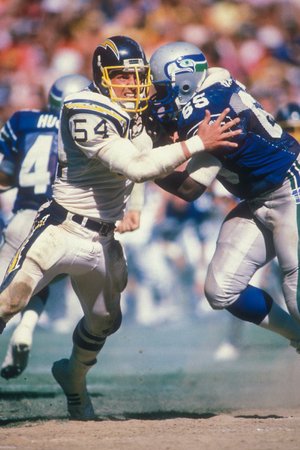 Billy Ray Smith Jr. (54) was a two-time consensus All-American as a defensive lineman while at Arkansas in 1979-82. He was the fi rst defensive player selected in the NFL Draft when he was taken with the fifth pick by the San Diego Chargers, with whom he spent his entire 10-year NFL career. (Los Angeles Chargers photo)