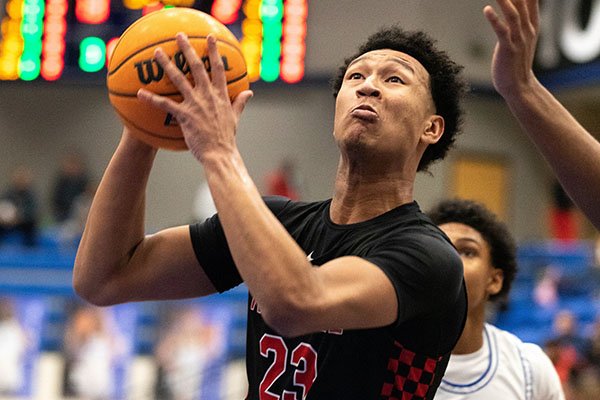 Fort Smith Northside center Jaylin Williams is shown during a game against Bryant on Friday, Feb. 7, 2020, in Bryant. ( Justin Cunningham)

University of Arkansas Coach Eric Musselman and his staff signed three future Hogs on Wednesday, the first day of the spring signing period that runs through Aug. 1

Graduate transfer commitments Jalen Tate and Vance Jackson were the first to sign with the Razorbacks followed by Fort Smith Northside center Jaylin Williams later in the evening.

Tate, 6-6, 180 pounds, has the ability to help the Hogs offensively and defensively at guard. He averaged 13.9 points, 5.4 rebounds and 3.6 assists and was named the Horizon League Defensive Player of the Year last season at Northern Kentucky as a redshirt junior.

He signed with Arkansas over interest from Cincinnati, Kansas State, Ohio State, Central Florida, Gonzaga and others.

"It's great finally getting it done," said Tate. "I'm super excited the fans are reaching out and it's great. I'm looking forward to just working man, getting to work and seeing how far we can go this year."

He also was named to the Horizon League All-Defensive Team in 2018 and 2019. His game has been compared with former Nevada forward and current Charlotte Hornets Cody Martin, who played for Musselman at Nevada.

Tate's father, Jermaine, played professionally for 13 years overseas after playing at Ohio State and Cincinnati while his brother, Jae'Sean, was a forward for Ohio State from 2014-18 and is now playing overseas in Australia.

ESPN rates Tate the 15th-best graduate transfer while Stadium rated him the No. 10 grad transfer.

He started 44 of 60 career games for the Lobos the last two seasons. He began his career at Connecticut before transferring to New Mexico after his freshman season. In his college career, he has shot 35.3% from beyond three-point line and has 10 or more points and rebounds in the same game eight times.

Jackson looks forward to getting to Fayetteville.

"[I want to] come in and impact tremendously and lead," said Jackson, who entered the NCAA transfer portal on March 30 and committed two days later. "Help the team scoring and rebounding, being positive and the voice for the team to help us win. I'm trying to end my career with a bang and victorious."

He chose Arkansas over interest from Memphis, Louisville, Arizona State, Ole Miss, Virginia Tech, Rutgers and others. Jackson is No. 32 on ESPN's best graduate transfer list.

Tate and Jackson will be immediately eligible to play for the Razorbacks in 2020-21.

Williams, 6-10, 230, committed to the Razorbacks over scholarship offers from Auburn, Oklahoma State, UConn, Texas A&M, Iowa State, Illinois and others. ESPN rates Williams a 4-star prospect, the No. 13 center and No. 88 overall recruit in the nation.

"Jaylin is another versatile player, one that can play the 4 of the 5, that possesses a well-rounded skill set," Musselman said. "He can play on the perimeter; he can space the floor, especially with his three-ball shooting; and he is a good passer. Jaylin is well-coached and, like his former high school teammate Isaiah Joe, knows how to take a charge. He is one of those rare players who can go get a defensive rebound then use his ball-handling ability to bring the ball up the floor."

Shooting guard Moses Moody, 6-6, 190 of Montverde (Fla.) Academy is expected to sign with the Hogs soon. The Little Rock native is rated an ESPN 4-star prospect, and the No. 10 shooting guard and No. 38 overall prospect in the nation.

He led North Little Rock to the Class 7A state title as a sophomore before transferring to Montverde.

Point guard Khalen 'KK' Robinson, 6-1, 180 pounds indicated he would sign with Arkansas on Wednesday but announced Tuesday night on Twitter that he would wait until April 20 because "It's a special day for my family!" His father's birthday is on the date.

He played his senior season at Oak Hill Academy in Virginia after transferring from Bryant. ESPN rates him a 4-star prospect, No. 20 point guard and the No. 82 overall recruit in the nation.