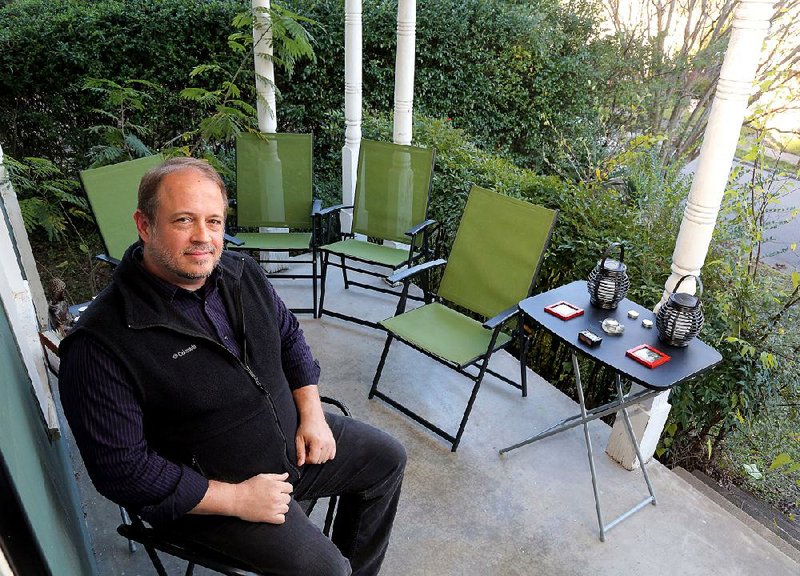 Glen Hooks, director of the Arkansas chapter of the Sierra Club, is shown in this photo.

The Trump administration on Thursday announced a change to regulations restricting air emissions of mercury from coal and oil-burning power plants by unwinding the legal justification behind the rule.

At issue is how the U.S. Environmental Protection Agency calculates the compliance costs and public-health benefits of mercury-control measures with respect to the side benefits of the regulations, namely reduced quantities of other hazardous air pollutants.

Environmental advocates, already alarmed by other Trump administration steps to relax environmental protections in the midst of the coronavirus pandemic, criticized the newly finalized change to mercury regulations.

"The cost of mercury pollution will once again be externalized on the health of Arkansans and wildlife under the EPA's proposal," Glen Hooks, director of the Arkansas chapter of the Sierra Club, said in a statement.

"The Arkansas Department of Health publishes fish consumption notices for areas throughout the state advising people against eating or limiting consumption of catfish, largemouth bass and other fish due to mercury contamination," Hooks said. "Today's action is the latest example of prioritizing polluter profits over the health of Americans."

Arkansas is home to five coal-fired power plants that have drawn scrutiny from environmental groups like the Sierra Club in the past for their emissions of sulfur dioxide and carbon dioxide.

However, in this instance, Arkansas' major utilities and environmental advocates find themselves on the same side. Both say the Obama administration's mercury rules should remain in effect.

Chuck Barlow, vice president for sustainability and environmental policy of Entergy, said the utility previously asked the Trump administration to keep the mercury rules in place as part of a multisector coalition. Entergy installed mercury pollution-control devices in power plants before the EPA's 2016 compliance deadline. The systems are currently in use, Barlow said.

Entergy is the state's largest provider of electricity and operates two coal-fired power plants. In 2018, Entergy announced it would phase out the burning of coal at the power plants in Jefferson and Independence counties by 2028 and 2030, respectively.

"Entergy does not anticipate changing its operations at White Bluff or Independence because of EPA's new rule, especially if, as expected, the new EPA rule keeps the current mercury emissions standard in place," Barlow said in an emailed statement.

American Electric Power, which operates two coal-fired power plants in the state through its subsidiary Southwestern Electric Power Co., likewise urged the EPA to keep the mercury standards in place.

"Rescinding the standards now will create new issues as state utility commissions may not allow recovery of the investments made to comply and ongoing operational expenses for those investments," Melissa McHenry, an American Electric Power spokeswoman, said in an emailed statement to the Democrat-Gazette. "It also would be costly and difficult to bypass the mercury controls that have already been installed."

Over the past 20 years, American Electric Power's mercury emissions have decreased by 97% amid $8.8 billion in equipment retrofitting to the company's coal-fired power plants, McHenry said.

"Although we disagreed with provisions of the rule when it was being promulgated, our controls are in place and compliance is being achieved," McHenry said in the statement.

Carol Browner, the EPA administrator during the Clinton administration who serves as board chair of the League of Conservation Voters, called the rule change a "sinister Trojan-horse policy change" that will undermine how the EPA considers the economic benefits of future regulations.

"This is disgraceful on the part of EPA," Browner told reporters during a conference call Thursday. "It comes on the heels of other poor decisions on air quality at a time when we can least afford it."

Mercury is a toxic heavy metal that can cause harmful health effects, especially for infants in the womb. The Obama administration restricted air emissions of mercury and other pollutants from power plants under the 2012 Mercury and Air Toxics Standards.

In response to a 2015 Supreme Court decision, Michigan v. EPA, that ruled the administration should have considered costs to industry when it issued the rule, the EPA issued an analysis that included co-benefits of reducing other pollutants, such as fine particulate matter, when weighing the benefits of the mercury regulations against the cost of installing pollution controls.

The Trump administration's action Thursday overturns that underlying justification. The EPA will leave the mercury regulations in place, but new legal challenges are expected as a result of the revision.

"Let me be clear: under this action, no more mercury will be emitted into the air than before," Wheeler said. "Anyone suggesting so is either purposefully misreading this action or simply does not understand it."

Wheeler, a former lobbyist for the coal industry, called claims from the environmental community that mercury emissions will go up "outrageous."

"If you're hearing frustration, I'm sorry," Wheeler said. "It's more geared at some of the former EPA officials who have purposefully misrepresented what we're doing."