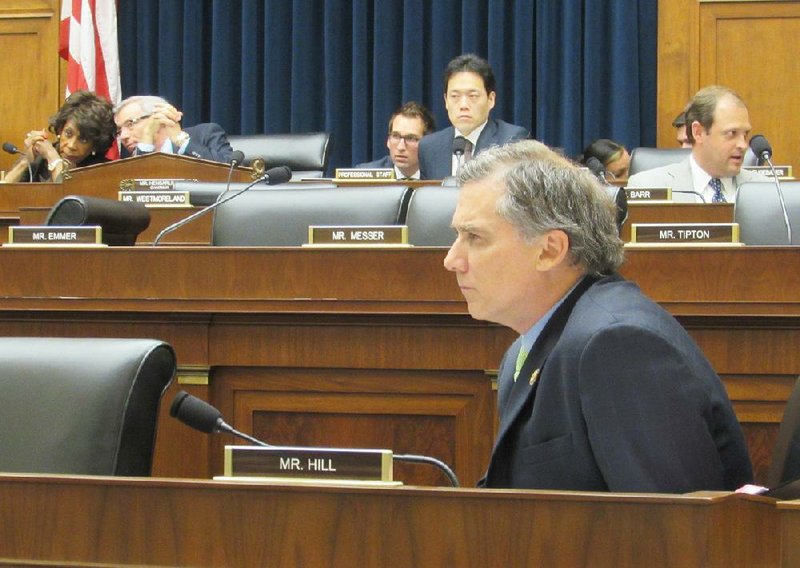 U.S. Rep. French Hill, a Republican from Little Rock, is shown in this file photo.

As a member of a newly created Congressional Oversight Commission, U.S. Rep. French Hill, R-Ark., will help monitor up to $500 billion in covid-19-related relief funds that are earmarked for business loans, loan guarantees and other investments.

That money, which was part of the $2.2 trillion aid package signed into law on March 27, may potentially be leveraged into more than $4 trillion in lending power, Treasury Secretary Steven Mnuchin has said.

House Minority Leader Kevin McCarthy, R-Calif., selected Hill, the representative from Arkansas' 2nd District, on Friday to serve on the five-member panel, which was created as part of last month's Coronavirus Aid, Relief, and Economic Security Act, also known as the CARES Act.

While the law gives Mnuchin broad authority to administer the funds, it tasked the new commission with oversight.

The commissioners will evaluate efforts by the U.S. Treasury Department and the Federal Reserve System Board of Governors "to provide economic stability as a result of the coronavirus disease 2019 (COVID-19) pandemic of 2020," the new law states.

The commission is supposed to issue "regular reports" -- one every 30 days.

"I expect this to be a time-consuming, intensive effort, particularly over the next six months to 10 months," Hill said in a telephone interview, adding, "I'm ready to go to work."

In a written statement, McCarthy portrayed the lawmaker from Little Rock as perfectly suited for the new assignment.

"French has been a leader serving his constituents in Arkansas and our nation as Congress crafted the most ambitious relief package in history," McCarthy said. "His personal background as a senior official at the Department of the Treasury and as a private banker provides important expertise that will guide his advocacy of immediate and effective solutions for the American people struggling from the despair during this crisis."

Hill was one of two Republicans appointed to the commission Friday.

In a written statement, McConnell emphasized the importance of the commission's role.

"The CARES Act is the biggest rescue package in the history of Congress," he said. "Appropriate, objective, and nonpartisan oversight will be key to ensuring its dollars and programs find their mark."

With leveraging factored in, the amount of money involved "will be an order of magnitude significantly larger than $500 billion," Hill said.

The commission will bring "enhanced transparency" to the process, he added.

"I was pleased to receive the appointment to the CARES Act oversight commission by Minority Leader Kevin McCarthy and I look forward to the challenge," he said.

Hill, 63, is no stranger to federal economic and banking policy.

Early in his career, he was a staff member for the U.S. Senate Committee on Banking, Housing, and Urban Affairs. Later, he served in the administration of then-President George H.W. Bush, first as the Treasury Department's deputy assistant secretary for corporate finance, then as executive secretary to the President's Economic Policy Council.

After returning to Arkansas, Hill became a banker. He led Delta Bank and Trust before its purchase by Simmons First National Corp. in 2014.

Elected to Congress that same year, Hill was quickly appointed to the House Financial Services Committee; he has served there ever since.

On Thursday, he was named to President Donald Trump's Opening Up America Again Congressional Group, which is advising the White House on coronavirus-related matters.

Now, Hill will help scrutinize one of the biggest economic programs in U.S. history.

Last month, with the coronavirus devastating the economy, lawmakers were eager to pass a major relief package.

There were demands, as well, for oversight.

Ultimately, lawmakers included a provision in the CARES Act establishing the commission, with one member appointed by House Speaker Nancy Pelosi, D-Calif.; one by McConnell; one by McCarthy; and one by Senate Minority Leader Charles Schumer, D-N.Y. A fifth member, who will serve as chairperson, will be jointly selected by Pelosi and McConnell.

On April 6, Schumer appointed Bharat Ramamurti to the Congressional Oversight Commission, calling him "a ferocious advocate for consumers who will fight for transparency and hold bad actors accountable."

Shalala, who served as Secretary of Health and Human Services during Bill Clinton's presidency, is a "deeply respected and highly accomplished leader" who will work "to ensure that this historic coronavirus relief package is being used wisely and efficiently to protect the lives and livelihoods of the American people, and not be exploited by profiteers and price-gougers," Pelosi said in a written statement.