Nonprofit on the front lines of pandemic 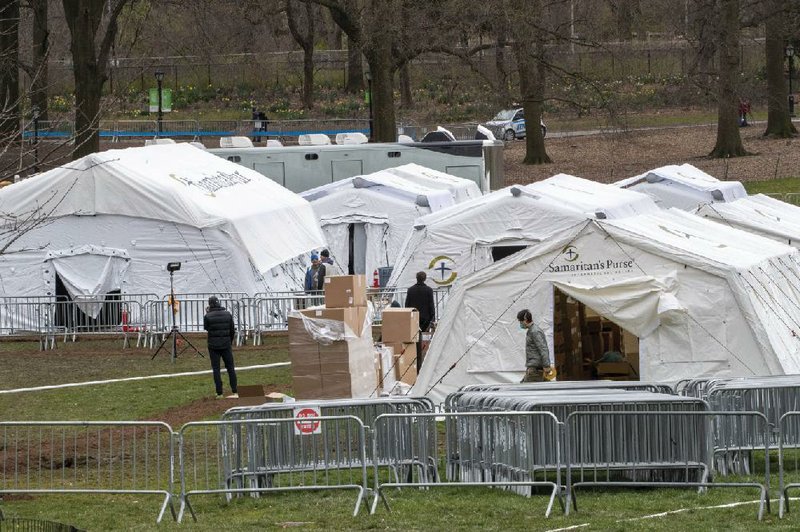 With covid-19 deaths soaring and the peak date uncertain, a charity known as Samaritan's Purse hurriedly set up a field hospital in New York's Central Park, providing 68 extra beds for the stricken city.

While they went about their tasks, another Samaritan's Purse team was rushing to Arkansas to help tornado-ravaged Jonesboro.

A continent away, Samaritan's Purse workers are fighting to save coronavirus victims in northern Italy at a recently-established field hospital there.

When rivers flood, winds blow, fires blaze and famines threaten, this Boone, N.C.-based nonprofit is often there to provide relief.

Between 2014 and 2018, it received gifts, contributions, grants and membership fees totaling $3.17 billion, according to an IRS-990 filed by the organization in August.

For employees and volunteers, risk levels vary, depending on assignment.

In South America, it has provided aid in Colombia to refugees fleeing Venezuela. In the Middle East, it has airlifted supplies to victims of the Syrian civil war.

During a previous deadly health crisis, Samaritan's Purse opened an Ebola treatment center in the Democratic Republic of the Congo.

Compared to Ebola, the coronavirus is less likely to kill those it infects, but it spreads more easily, touching almost every corner of the globe.

With medical workers desperately needed, Samaritan's Purse has mobilized and Regina Randolph, a registered nurse from Cumberland County, Tenn., is one of those who has answered the call.

After providing medical care for years in her own country, Randolph began looking for opportunities to serve overseas.

"When I was in Haiti with another organization, I did my own survey while I was there and asked the people after the big earthquake who they would say had done the most for their country since the earthquake, and they said 'hands down, Samaritan's Purse,'" she said in an email interview.

Asked how she ended up working at a covid-19 hospital in Italy, Randolph, an evangelical Christian, said, "My husband and I committed to do Samaritan's Purse disaster relief about four years ago."

"We decided then that if they called us, we would go," she said, adding, "They called us and we came."

Initially, many Americans were comparing the coronavirus to the flu; it's a reaction that Randolph understands.

"To be honest, I may have been one of those people early on that thought that, but I have realized since I've been here in Italy that that's not true," she said. "It is much more viral, it's easier to contract, and it's much more dangerous than the flu. Many more people are dying from covid-19 than the flu," she said.

The virus has been especially deadly in Italy. Of the 168,941 testing positive there, death had taken 22,170 as of Thursday, according to the Johns Hopkins University & Medicine Coronavirus Resource Center.

That's a fatality rate of more than 13%.

Randolph hopes the United States will be spared the worst.

"Please do what the government is asking you to do -- which is to stay in, stay away from other people, cover your face, wash your hands, and do not touch your face," she wrote.

At the field hospital outside Milan, hours are long and the pace is unrelenting.

"We don't have much time between shifts, but I usually connect with people at home, pray, and usually spend some time quietly with just God and I," she said.

Italians have welcomed her organization's presence, she said.

"The people that are at the hospital across the street from our facility have been asking to come to the Samaritan's Purse Emergency Field Hospital because they know miracles are happening," she added.

While its international efforts stretch back a half-century, it dispatched its first U.S. Disaster Relief Unit tractor-trailer team in 1998. Since then, it has responded to more than 200 emergencies, including the aftermath of several Arkansas tornadoes: In Clinton in 2008; Mena in 2009; Vilonia and Mayflower in 2014 and in Craighead County just days ago. The group returned to Faulkner County in 2015 and 2016 to help with rebuilding efforts there, a spokeswoman said.

After the March 28 tornado in Jonesboro, the organization cleared debris, took chainsaws to fallen trees, placed tarps on rooftops. With help from 150 volunteers, it was able to aid 40 families, officials said.

Over the past 12 years, Samaritan's Purse says it has gathered more than 1,500 volunteers in Arkansas who have provided more than 42,000 hours of disaster assistance.

One of the workers was Rudy Littler, a graduate of Ozark High School and the University of Central Arkansas who serves as the nonprofit's National Director of Donor Partnerships.

After working for other Christian organizations, he joined Samaritan's Purse about seven years ago.

It's a move he is glad he made.

"I've loved being here and love seeing how we're helping people all over the world who find themselves in impossible situations," he said in an email interview.

Since joining Samaritan's Purse, he has personally witnessed its worldwide efforts.

"I've been able to share our work first hand with our donors in places like refugee settlements in Uganda, post-Ebola recovery in Liberia, earthquake recovery in Nepal, refugee camps and our Emergency Field Hospital in Iraq ... slums in the Philippines, [and] our fight against human trafficking in Cambodia," he said.

"I'm proud to work for an organization that will go, quite literally, to the ends of the earth to bring life-saving aid and unashamedly bring the message of the Gospel along with us. Doing all of it in Jesus' Name," he said.

Print Headline: Nonprofit on the front lines of pandemic