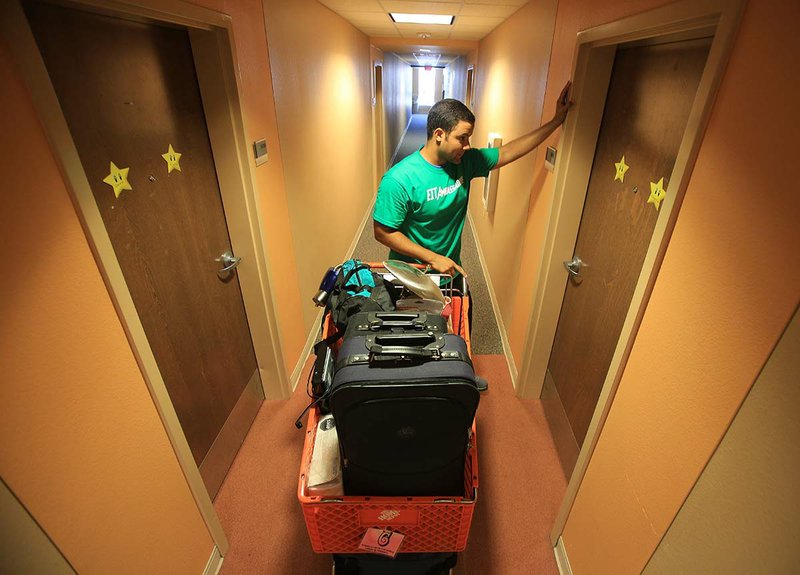 Esteban Rodriguez waits at the door in a dorm on the University of Arkansas at Little Rock campus in this 2013 file photo.

Students and their families are receiving reimbursement credits for campus housing shutdowns during the coronavirus crisis, with colleges putting their costs into the millions.

The decisions on prorating refunds have been described as the right thing to do by families and university leaders.

But schools have taken various approaches in calculating reimbursement amounts as they deal with the sting of unplanned costs arising from the outbreak. Incoming federal aid to colleges is not expected to fully cover expenses, some schools said.

Arkansas State University calculated reimbursements based in part on a student's "out-of-pocket" expenses for housing and meals after financial aid awards, including institutional and outside scholarships, as well as state and federal grants.

Some other large universities, including the University of Arkansas, Fayetteville and Arkansas Tech University, are not considering a student's aid award when calculating reimbursements.

"I think institutions across the country are working hard to be fair to students and do what they can afford to do," said Jeff Hankins, a spokesman for the Arkansas State University System.

The ASU reimbursements are calculated to be "fair to students and fair to the university," Hankins said. They will likely add up to about $2.5 million, including about $2.1 million in estimated refund payments to 1,849 students, Hankins said.

Room-and-board costs about $4,836 per semester, according to the ASU website. Campus housing closed to most on April 3, with ASU, like many other universities that have closed dormitories, allowing some students to remain based on need.

Some ASU students will get reimbursements of more than $2,500 and others a few hundred dollars or even less, according to a preliminary document with reimbursement amounts. A total of 283 students otherwise eligible for reimbursement had no "out-of-pocket" expenses for meals or housing and so are anticipated not to receive credits or refunds, Hankins said.

"We have not finalized when the refunds will occur but are doing everything possible to expedite the process," Hankins said Friday.

ASU is dealing with unexpected costs from the coronavirus and, like other public universities in Arkansas, a reduction in state funding for the fiscal year that ends June 30. Incoming federal aid to students and colleges is being provided through the Coronavirus Aid, Relief, and Economic Security Act, but it's unclear exactly how such dollars might be used.

The Jonesboro campus, the second-largest in the state, is not alone in taking an individualized approach to reimbursements.

Some universities haven't announced details for such credits, but Ouachita Baptist University in Arkadelphia published online its formula for calculating reimbursements that factors in a student's institutional aid.

"Trustees believe this is the fairest approach to this complex issue," Sells said.

The cost to Ouachita Baptist in reimbursements is about $1,072,000, spokeswoman Brooke Zimny said in an email, with university operations "adjusted to help ease that financial burden without negatively affecting our students, faculty or staff."

A semester of room-and-board costs about $4,000, Ouachita Baptist's website states. The university asked students to leave housing by March 15. At the end of February, 1,360 students were in campus housing, Zimny has said.

Ouachita Baptist on its website states that students and families can decline all or a portion of the reimbursement.

The option was not initially planned "but we received questions from multiple parents if they could decline their credit, recognizing that the credits would have a financial impact on the university," Zimny said. She said she did not have information on how many have declined reimbursement.

Arkansas Tech University, one of the first public universities in the state to approve reimbursements, did so on March 22, a day after the university's president, Robin Bowen, issued a statement describing an "initial" decision not to offer such credits.

"At first we were told there would be no refund for housing and that was very upsetting," Cindy Ault, the parent of a junior at Arkansas Tech, said in an electronic message. "Many of these kids have taken out loans etc and it was not right for Tech or any college to not give credit for housing."

The campus in Russellville closed its housing April 3, offering a prorated credit, or, for graduating students, a refund.

The "credits and refunds for housing and meals are straightforward and not dependent upon the student's amount of institutional aid," spokesman Sam Strasner said in an email. "The date of checkout determines the amount of the credit or refund."

A semester of Arkansas Tech housing costs an estimated $2,260 and on-campus meals about $1,875, according to the school's website.

UA estimates its housing reimbursement costs at about $3.9 million and meal-plan reimbursements to be about $2.2 million. Campus housing closed on April 3.

A spokesman has said fewer than 200 students remain on campus, after about 4,950 students were in UA-managed housing earlier this spring.

Asked if reimbursements could be lowered based on a student's institutional aid, Amy Schlesing, a UA spokeswoman, said in an email "no adjustment would be made on that basis."

Some private universities in the state closed residence halls within days of the state's first identified coronavirus case on March 11.

Harding University, the state's largest private university with a fall enrollment of 4,793 students, according to state data, announced the suspension of in-person classes on March 12, during its spring break, and told students to remain home instead of returning to campus.

Jana Rucker, a spokeswoman for the Christian university in Searcy, said the cost of reimbursements is more than $3 million. The university had more than 3,000 students living on campus earlier this spring, Rucker has said.

"We have a significant revenue shortfall. We are cutting expenditures in a number of areas to make up the shortfall," Rucker said. "[Coronavirus Aid, Relief, and Economic Security] Act funds will make up some of the shortfall."

"We are in the process of evaluating the impact on university operations, but less than half of the loss will likely be covered by the [federal measure's] emergency funding intended to help higher education institutions recover these losses," Gumm said in an email.

But schools stressed the estimates could change.

Caleigh Moyer, a spokeswoman for Southern Arkansas University, said calculating reimbursements is a "very labor-intensive process, as each student's situation is unique and each account must be calculated individually." She said the initial estimate is up to $1.3 million in reimbursement costs. The university in Magnolia closed its housing April 6.

Not all universities have closed housing. The University of Arkansas at Fort Smith has a task force looking at possible credits or refunds but Chancellor Terisa Riley has said "no refunds or credits will be issued until such time as we announce building closures."

CORRECTION: Arkansas State University is providing students an estimated $2.5 million in total reimbursements, including about $2.1 million in refund payments, because of housing closures. An earlier version of this article incorrectly described the estimated amount and type of reimbursement being provided by ASU.