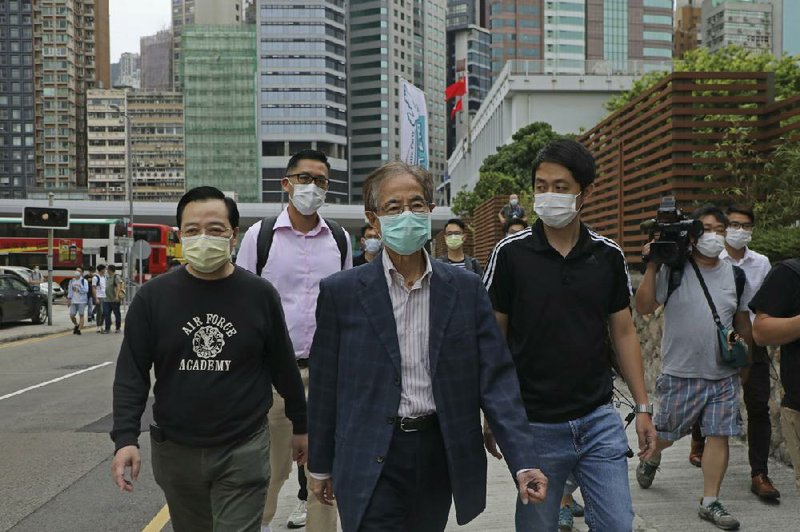 HONG KONG -- More than a dozen leading pro-democracy activists and former lawmakers in Hong Kong were arrested Saturday in connection with the protests that raged in the city last year, the biggest roundup of prominent opposition figures in recent memory.

The arrests signaled a broader crackdown on the anti-government movement that roiled the semiautonomous city last year, one of the most significant challenges to Communist Party rule in decades. Beijing and pro-government supporters in the city have called for lawmakers to pass national security laws that residents worry would allow mainland authorities to further encroach upon the territory's civic freedoms.

The high-profile arrests were made as Hong Kong battled to contain the coronavirus outbreak, which has helped quiet down the huge street protests but fueled further distrust of authorities. The virus has halted protests around the world, forcing people to stay home and giving authorities new laws for limiting public gatherings, detaining people with less fear of public blowback while many residents remained under lockdowns or observing limits on their movement.

But the arrests Saturday in Hong Kong, along with a renewed push for national security legislation in the city, could anger protesters and reinvigorate mass demonstrations that had tapered off.

Fifteen activists between 24 and 81 years old were rounded up on suspicion of organizing, publicizing or taking part in several unauthorized assemblies between August and October and will face prosecution, police said Saturday.

While opposition politicians have been included among the thousands of protest-related arrests over the past year, rarely have so many prominent pro-democracy figures been arrested at once.

Lau Siu-kai, vice president of the Chinese Association of Hong Kong and Macao Studies, a powerful Beijing advisory group, said the arrests represented an early step toward a broader crackdown by Beijing.

The arrests reflect an assessment by Beijing that protests in Hong Kong over the past year pose such a threat to national security that it is worthwhile to defy U.S. threats of retaliation if a crackdown takes place, he said.

"Now Beijing is calling the U.S.' bluff and taking the initial steps against the Hong Kong opposition, and there will be more steps to shrink their space," said Lau, who was also a senior Hong Kong government official in the years immediately after Britain's return of the city to Chinese sovereignty.

The arrests followed calls from China's central government in recent days for Hong Kong to enact a package of national security laws that was last put forward in 2003 but shelved after a mass protest.

Luo Huining, Beijing's top representative in Hong Kong, said last week that national security has always been a "prominent shortcoming" since the former British colony's return to Chinese control in 1997. He called for urgent work on the "legal system and enforcement mechanism to safeguard national security," a contentious issue in the city.

Legal experts and critics of Beijing have warned against perceived increased interference in Hong Kong's local affairs by the Chinese government. The central government's liaison office in Hong Kong has recently criticized filibustering by pro-democracy legislators, raising concerns that it was violating the "one country, two systems" principle.

The Hong Kong Bar Association called on Chinese authorities to exercise restraint and said the comments by Beijing's representatives "could easily be perceived as interference" in contravention of Hong Kong's Basic Law, the local Constitution. Late Friday, the liaison office responded that as Beijing's designated representative in the city, the prohibitions on departments of China's central government interfering in Hong Kong affairs did not apply.