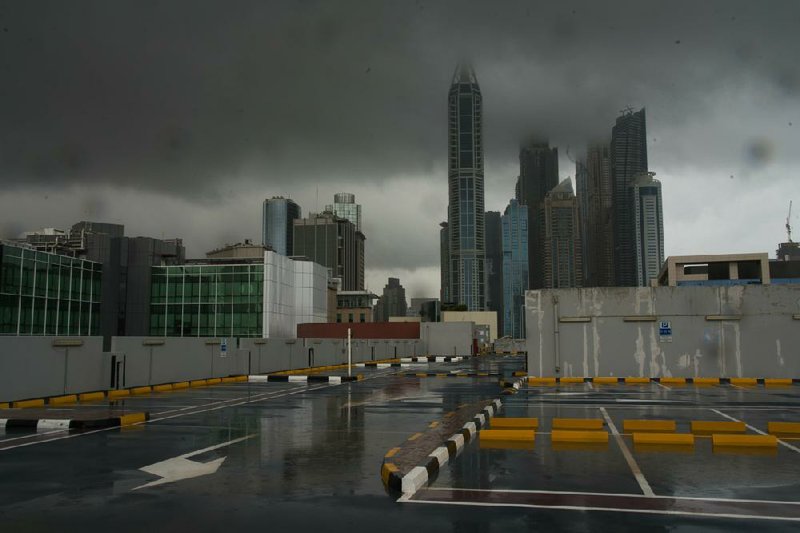 Storm clouds cover up the tops of buildings in the Dubai Marina as rain falls on a parking lot that stands empty over the coronavirus pandemic in Dubai, United Arab Emirates, on Wednesday. Middle East economies, already wracked by high numbers of unemployed youth, unrest, conflict and large numbers of refugees, will sink into a recession this year sparked by the double shock of the coronavirus outbreak and low oil prices, the International Monetary Fund said Wednesday. (AP/Jon Gambrell)

DUBAI, United Arab Emirates -- The Middle East, already wracked by high numbers of unemployed youth, unrest, conflict and large numbers of refugees, will sink into a recession this year sparked by the double shock of the coronavirus outbreak and low oil prices, the International Monetary Fund said last week.

The impact of covid-19, the disease caused by the virus, threatens to leave in its wake significant economic turmoil across the region, the international lender said. If governments mishandle the outbreak, the IMF warns this will sow the seeds for even more social unrest and instability.

Given the magnitude of the global crisis, the lender is calling on governments to prioritize health care spending, regardless of fiscal capacity, in order to contain the crisis as swiftly as possible.

Iran was already in deep economic recession due to U.S. sanctions that were reimposed after President Donald Trump pulled America out of Tehran's nuclear deal with world powers in 2018. It is now struggling to manage the outbreak of the virus. The country's economy is expected to contract this year by 6%, according to the IMF.

Globally, the IMF expects the world's economy to shrink 3% this year before rebounding in 2021 with 5.8% growth. Prospects for a rebound, however, are far from certain.

As millions of people lose their jobs around the world due to lockdowns, closures and curfews, cash-strapped governments are racing to secure loans from the IMF to support the most vulnerable people.

The IMF has said it is prepared to commit its $1 trillion in lending capacity to assist nations.

In a sign of just how dire the situation has become in Iran, the government requested a $5 billion loan from the IMF in recent weeks -- the first such request made by Iran in nearly six decades. The IMF said it's still looking into the request and seeking additional information from Iran.

Jihad Azour, who oversees the IMF's Middle East and Central Asia department, said it's too early to tell just how many people have lost their jobs across the region amid the crisis. He cautioned that the Mideast is going through only the first wave of shock and should be prepared for long-lasting impacts.

"The message this year is we are facing one of the really most challenging crises that the region has ever experienced," Azour told The Associated Press.

"A certain number of measures are needed, and the priority needs to be put behind health care," he added.

In Egypt, the blow to tourism and remittances threatens to push even more people into poverty as the country stops shy of implementing a full lockdown for fear of further damaging the economy.

While the IMF does not expect Egypt to slide into recession this year, growth will shrink from over 5% last year to just 2% this year.

Across wealthy oil exporting countries in the region, the IMF said oil prices under $30 a barrel could result in more than $230 billion in lost annual revenue for these nations.

In Saudi Arabia, the economy will slide into recession, contracting by about 2.3% this year before climbing to nearly 3% projected growth in 2021, according to the IMF. The kingdom has also lost vital tourism revenue as holy sites in Mecca and Medina remain closed to pilgrims from around the world.

For other oil exporting countries like Algeria, Bahrain, Iraq and Oman, the international lender said low oil prices threaten to deplete financial reserves as spending increases to combat the virus.

The new coronavirus causes mild or moderate symptoms for most people. For some, especially older adults and people with existing health problems, it can cause more severe illness or death. Worldwide, almost 2 million people have been infected and more than 127,000 have died from the virus, according to Johns Hopkins University.

The IMF said the biggest challenges in managing the virus, however, will be in conflict-torn countries like Yemen, Afghanistan and Iraq, as well as countries with large refugee populations such as Lebanon, Jordan and Pakistan. For these six countries, the IMF projects negative growth this year.

The IMF did not give any economic projections for Syria, where the civil war, now in its tenth year, has forced some 6 million Syrians to flee the country and displaced another 7 million internally.