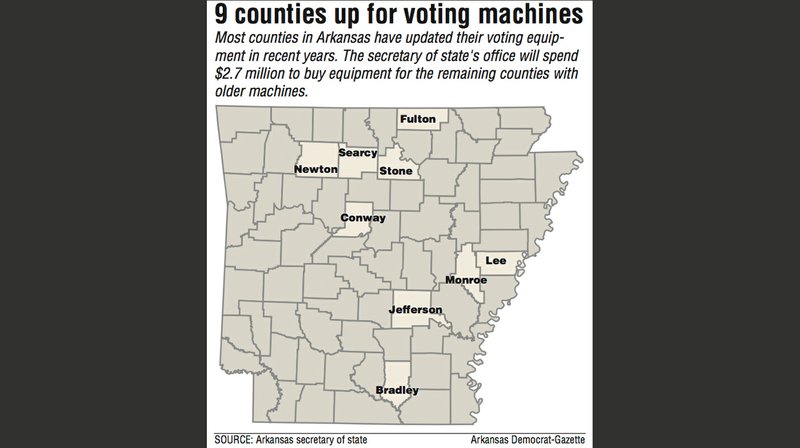 9 counties up for voting machines

Secretary of State John Thurston’s office has decided to use state and federal funds to pay for new voting equipment in the nine Arkansas counties that don’t have updated equipment for the Nov. 3 general election.

The counties, initially, were to share a portion of the costs for new equipment.

“Given the impact the covid-19 pandemic has had across the state, the secretary of state’s office has had to reassess our plan in working with the remaining nine counties for new election equipment,” said Kevin Niehaus, public relations director for the Republican secretary of state.

“With the counties needing to realign their fiscal priorities, it became apparent to us that fully funding the election equipment for these counties was the only viable option,” he said in a written statement. “With the integrity of our elections at stake, having all 75 counties working off the new equipment has always been a top priority.”

The estimated cost for the new voting equipment for those counties is roughly $2.7 million, Niehaus said.

“It’s a bright spot with everything else going on,” during the covid-19 pandemic, he said. He was thankful for the help from the secretary of state’s office, which has been very cooperative with his office, he said.

Jefferson County Election Commissioner Stuart “Stu” Soffer said the equipment will be great to have, but the county must also be able to train election workers to use the new equipment.

“If we can’t train people, we are dead in the water,” he said. “My concern is if the covid-19 danger continues, poll workers are going to be very reluctant to come out for training and to work.”

Sixty-four of the state’s 75 counties had updated voting equipment for the March 3 primary election that was purchased through a mixture of state, local and federal funds in the past few years.

Those counties included 10 for which Thurston’s office purchased new voting equipment last year through Nebraska-based Election Systems and Software with the help of state funding made available under Act 808 of 2019 and funds from most of those counties. The counties are Baxter, Drew, Lincoln, Madison, Mississippi, Phillips, Poinsett, Saline, St. Francis and Van Buren.

Act 808 diverted $8.24 million in excess funds from the property tax relief trust fund to the county voting systems grant fund. The state funds included about $2 million to reimburse Ashley, Benton and White counties for half of what they paid for their new equipment.

Officials in Scott and Pulaski counties signed contracts in February to have Thurston buy voting equipment with the aim of using the equipment in the Nov. 3 general election. Election Systems and Software recently delivered the new equipment to Pulaski and Scott counties, Niehaus said.

Bryan Poe, director of elections at the Pulaski County Election Commission, said “we are planning to use the new equipment for the general election in November.”

In late February, Soffer called on elected officials in Jefferson County to put pressure on the state to pay for new voting machines for the general election. At that time, he said he worried that cash-strapped Jefferson County wouldn’t be able to come up with the more than $300,000 that the secretary of state’s office said the county will have to pay to acquire 140 of the new Express-Vote voting machines from Election Systems and Software.

Two days before the first reported positive test for the coronavirus in Arkansas on March 11, state Rep. Doug House, R-North Little Rock, floated the idea of the state treasury loaning money to the counties that can’t afford their share of the cost for new voting equipment. The idea that would have required legislation ultimately fizzled, state officials said.

Niehaus said Friday that “nobody pushed us” to decide to use state and federal funds to buy the machines for the nine counties that don’t have them.

“That was an internal decision that we came to on our own,” he said.

Hendren, who sponsored Act 808 of 2019, said Friday that he didn’t object to the secretary of state office’s plan, even if the counties aren’t required to provide matching funds.

With the covid-19 pandemic, it’s important that citizens in those counties have good voting equipment so they can vote safety and efficiently, he said.

Shepherd said Friday that the secretary of state’s office plan “made sense to me.”

A spokeswoman for the governor said Saturday that Hutchinson didn’t have “any objections to the use of federal funds to purchase new voting machines. There are no budgeted funds in general revenue for that purpose.”

Niehaus said the secretary of state’s office will use $1.96 million in state funds left over from the $8.24 million that it received under Act 808 of 2019, combined with federal funds for the purchases.

“This will consist of getting new equipment for the nine remaining counties, supplemental equipment for counties and equipment for [the secretary of state’s office] to have on hand in case of an emergency,” Niehaus said.

About $400,000 of the federal grant will be set aside for an online voter registration system, in case the General Assembly approves such legislation in the 2021 regular session, Niehaus said.

He said about $400,000 of the federal grant money will be used to make “internal upgrades for the secretary of state’s election night reporting system.”

In addition, $750,000 from the federal grant will be used to “ensure that poll locations and voting equipment storage sites are secure from cyber and environmental threats,” while $150,000 will be for cybertraining for secretary of state office’s staff and officials in the counties, Niehaus said.

Also, $72,250 will be used to combat cyber vulnerabilities by using multiple methods of authenticating access by workers to the voter registration system, he said.

The secretary of state’s office must provide $1 million in matching funds for the $5 million federal Help America Vote Act grant, he said. These funds were included in the Consolidated Appropriations Act of 2020 signed by President Donald Trump on Dec. 20. The act provides $425 million to the U.S. Election Assistance Commission to make grant payments to states using the voting-age population formula in the Help America Vote Act, according to the commission.

“This grant is for covid-19 related issues for the upcoming November election only,” he said.

The federal law includes $400 million in new Help America Vote Act emergency funds, made available to states to prevent, prepare for, and respond to the coronavirus for the 2020 federal election cycle, the U.S. Election Assistance Commission said. This supplemental funding, distributed by the commission, will provide states with additional resources to protect the 2020 elections from the effects of the novel coronavirus, according to the commission. 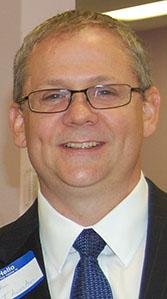 Secretary of State John Thurston is shown in this file photo.