Volunteer shortage has food pantries in dire need of workers 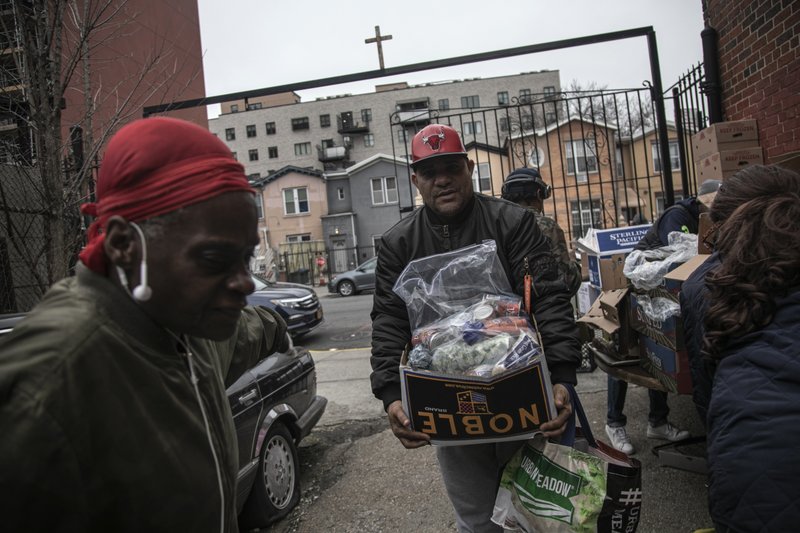 Surrounded by a few volunteers, a man carries food donations from St. Stephen Outreach in the Brooklyn borough of New York, on Friday, March 20, 2020. For decades, American nonprofits have relied on a cadre of volunteers who quite suddenly aren't able to show up. With millions staying home during the pandemic, charities that help the country's neediest are facing even greater need. Many Americans have now been ordered to shelter in place, but there is an exception for people providing essential services, and that includes food bank volunteering. (AP Photo/Wong Maye-E)

For more than a week, Elaine Peoples, who cooked for a now-shuttered day care center, has been out of work. At 68, she's also at a higher risk for catching the new coronavirus. Nonetheless, she's showing up four days a week for her volunteer shift at an increasingly crowded Brooklyn soup kitchen and food pantry.

"Volunteering is vital," said Peoples, who herself is experiencing financial strain. "Everything I get goes to bills. My budget is stretched to the limit. There is no extra."

For decades, American nonprofits have relied on a cadre of volunteers who -- quite suddenly -- aren't able to show up. With millions staying home during the pandemic, charities that help the country's neediest are finding themselves in need.

"This is a time when we do need everybody pulling together to help us out," said Leslie Bacho, chief executive officer of Second Harvest of Silicon Valley, Calif., one of the nation's largest food banks.

Many Americans have now been ordered to stay inside their homes, although there are exceptions for people providing essential services, and, in orders reviewed by The Associated Press, that includes volunteering at food banks.

Nonetheless, Bacho said half of the bank's volunteers -- the equivalent of 107 full-time staff members -- aren't showing up. This means as more people need food, there's less ability to get it to them.

"Volunteers are needed the most in times of crisis," said Dr. Grover Gilmore, dean of Case Western's school of social sciences. "This is simply another example, and an extreme example, of everyone needing to help as best they can."

For most people, the new coronavirus causes only mild or moderate symptoms. But for some older adults and people with existing health problems, it can cause more severe illness and even death.

One out of four Americans volunteers, performing an estimated 8 billion hours a year of service. The most common work? Collecting, preparing, distributing or serving food, according to the Bureau of Labor Statistics.

Kathryn Strickland, chief network officer at Feeding America, the nation's largest organization of food banks, with some 200, said the group has seen a "sharp decline" in volunteers across the country and is asking for new volunteers and scrambling to hire additional paid staff.

Sheila Williams usually has 25 volunteers to feed about 100 people a day at St. Stephen Outreach in Brooklyn, N.Y.

Now she's down to just 10, including Peoples, with lines out the door, more people than she has ever seen.

"Folks that don't normally come are coming," she said, after dishing out countless plates of franks, rice, beans and fruit. "They've lost their job, there's nothing in the supermarket."

In Silicon Valley, some 10,000 homeless people are in a terribly vulnerable situation, said Jennifer Loving, CEO of Destination: Home, a public-private partnership that addresses homelessness. Public health experts have warned that people living in tents or under tarps have less access to soap and water and are more exposed to disease and violence.

"Further, many others, like intake and shelter workers and food delivery workers are some of our lowest-paid residents and are now called to the front lines," she said. "We must do everything we can to protect these heroes from further economic and health peril."

Food banks are also largely canceling soup kitchens to avoid close contact that can spread the virus. Instead, they're planning to drop boxes of food into people's trunks at drive-thru stations.

In Seattle, the initial epicenter of the U.S. outbreak, Food Lifeline is struggling. It relies on roughly 18,000 volunteers every year to collect and sort food donations, package boxes and deliver goods. The organization is now telling all but a small core group of volunteers to stay home.

"We can't take those food donations because we can't sort and repack them," Mark Coleman said. Instead, they're buying prepackaged food that doesn't require sorting, at roughly $30 per box. All of this is happening as they expect demand for their services to double, Coleman said. Before the crisis, they packaged 72,000 boxes a month.

"It's really tough. The stock market crash in 2008 was tough, but nothing like this," he said.