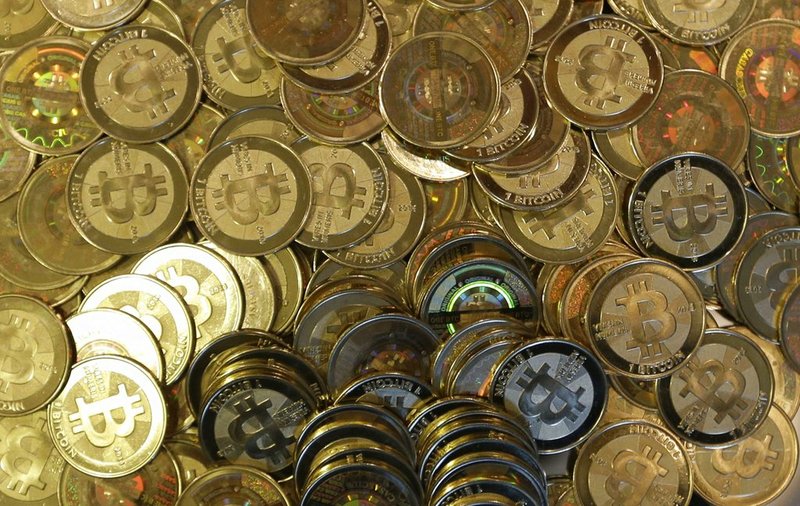 Bitcoin tokens, representing the cryptocurrency, are shown at a shop in Sandy, Utah, in this April 2013 file photo. Online criminals often use cryptocurrency such as Bitcoin because it is much harder to track down where the funds end up.

The FBI is monitoring and investigating scams that have recently emerged in the wake of the covid-19 pandemic.

With the uncertainty of the times, many criminals are finding success with new twists on old scams during the pandemic, according to a local FBI spokesman.

One of the scams on the increase is perpetrators trying to get money in advance for medical products they do not actually possess, according to FBI Little Rock spokesman Connor Hagan.

"We know that in the current environment there is a huge demand for PPE [personal protective equipment] and certain medical equipment," Hagan said. "Because of that, we're seeing it as a pretty ripe time for fraudulent actors to perpetrate advanced fees."

Advance fee schemes entice the victim, an individual or company, with supplies and ask for payment up front either in full or partially. The seller does not have the item promised and has no intention of delivering the item.

The advance fee scheme can also be used in conjunction with other tricks such as an email address that looks like others that purchasers have dealt with.

"A bad guy will say, 'Oh, yeah, I work for a reputable medical distributor company A,'" Hagan said. "And they'll have emails that they've basically spoofed or fraudulently made up that look legitimate or nearly identical to the address that these purchasers use to deal with the company on a regular basis."

Some of the incidents the FBI have investigated are orchestrated by entities outside of the country.

"There is a group of scammers looking to basically defraud purchasers, and, from what we've seen, they're both foreign and domestic entities," Hagan said. "In one case we've seen an individual claim to represent an entity with a purchasing agency that had an existing business relationship. By the time the actual legitimate agency became suspicious of the transactions, a lot of the funds had been transferred out of the reach of U.S. law enforcement."

Although Hagan would not discuss where those funds that have been stolen through the scam are going, he did say many funds stolen pre-pandemic were going to eastern Europe and west Africa to countries that do not respect the United States' laws.

Hagan recommended contacting any seller directly through the usual channels if there is suspicious behavior.

"If they initiate contact and then are difficult to track down such as with the telephone number or personal email address and it does not look legitimate, that's a huge warning sign," Hagan said. "A second one is that the seller is not an entity the purchaser has done business with before, so they don't have an existing business relationship."

Since the outbreak of covid-19, many companies have switched their product lines to fill the increased demand for protective gear. To ensure there are no scams, Hagan recommends contacting a known person in the company, verify with other contacts and research the company through the Better Business Bureau.

Janet Robb, president and CEO of the Better Business Bureau of Arkansas, said she has seen the recent blend of scams and has resources to help determine the legitimacy of a business.

"Anytime you're thinking of purchasing something from a company that you've not dealt with before, check them out at bbb.org," Robb said. "We have reports on companies throughout the United States and Canada. If we do not have a report on that company, that's kind of a red flag but that does not mean they're not in existence."

Criminals are also using cryptocurrency -- digital currency -- such as bitcoin in their schemes because it is much harder to track down where the funds ended up, Hagan said.

"If they can get somebody to go into a bitcoin or cryptocurrency scheme, a lot of times these guys know it is nearly impossible to track, and the same with getting the money back," he said.

Multiple different types of schemes are being utilized by criminals using cryptocurrency, according to Hagan, such as blackmailing and extortion with the infection of covid-19 used as the threat.

"We take a very dim view on that, obviously," Hagan said. "It's pretty infuriating that someone is not only trying to extort you with bitcoin, but they're saying that, 'we're not only [going to] release your information, but we'll spread coronavirus to your family.' That's a new twist."

Hagan urged anyone dealing with a blackmail attempt to reach out to the FBI.

Criminals will also try to get a victim to move stolen money into the victim's account and transfer the funds into cryptocurrency by spinning sad tales of being quarantined in another country with no way to get money to their family.

"These work-from-home scams basically -- that donation that they're asking you to deposit is likely money stolen from others," Hagan said. "If you accept it and transfer that stolen money it's considered illegal money muling activity... so you are actually helping the bad guys move their money."

The reason agents call this a "work-from-home" scheme is that many people who are working from home can be tricked into believing the person they are transferring the money for is a co-worker or boss.

Someone can also verify with the Better Business Bureau whether the company a potential scammer is with is legitimate, Robb said.

"There, again, it goes back to some really simple questions," she said. "Who contacted you? Who is that person really? Can you verify they are who they say they are and if they're with a company that's been checked out?"

Bad actors will also try to trick victims by enticing them with products that do not exist, according to Hagan. This is made worse by authorities not being able to get the money back.

"What we've been seeing is customers are lured to these e-commerce sites offering products they claim can prevent covid-19," Hagan said. "They pay in cryptocurrency for products that don't actually exist. As soon as you make that payment in cryptocurrency, many times it's gone."

Hagan also warned to watch out for scams involving new cryptocurrency where someone is offering a large return on a small investment.

Hagan again said researching the contact is one of the best preventive measures to make sure the entity is legitimate.

"You can always independently verify the vendor or charity is legitimate," Hagan said. "Do that by doing some due diligence with research. Don't jump at an offer, especially if it seems too good to be true and it has an urgent time limit to it."

Robb advised that any individual or company should be kept at arm's length until verified to be legitimate.

"We're taught from a very early age you don't open the front door of your house to a stranger, right?" Robb said. "The same rule applies with your phone and your computer. Don't open those doors to a stranger."

The FBI has also been focusing on health care related scams, as it is a particularly vulnerable area because many are in fear of covid-19. Hagan called covid-19 testing schemes "a big one."

"Individuals will contact a person by phone or email [and] tell you the governor or government officials require you to take a covid-19 test -- that it's required by the government," Hagan said. "These scammers will likely ask for your health insurance information including sometimes Medicare or Medicaid numbers and your personal information."

Hagan urged residents to beware of unexpected contact from those either asking or telling you to take a covid-19 test and to contact a known health professional for condition assessment and covid-19 testing.

Hagan also reiterated to not trust anyone claiming to offer treatment, vaccine or a cure for covid-19, and to verify whether it is a legitimate treatment from reputable sources.

While the FBI is continuing the work to prevent and investigate these scams, Hagan estimates it will be a while before the threat posed by them subsides.

"These guys will be around for a while," he said. "Scammers always come out of the woodwork when they sense the ability to make money off people's fears and prey on their uncertainty."