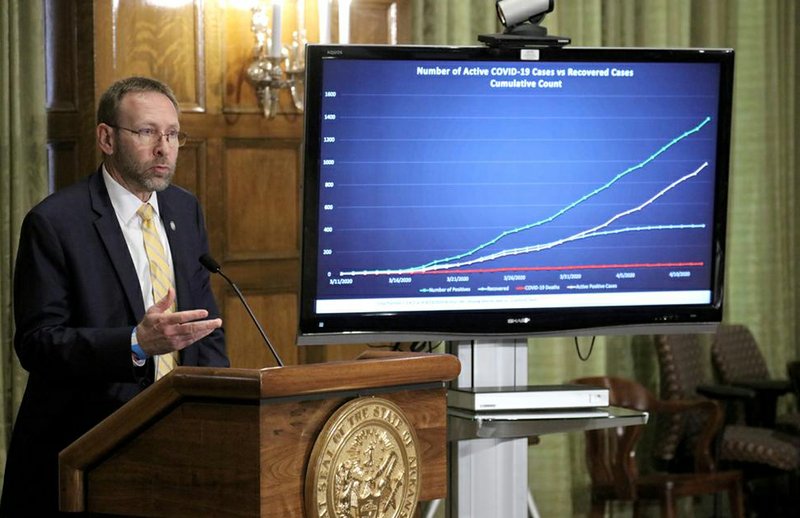 Dr. Nate Smith, secretary of the Arkansas Department of Health, shows statistics on the covid-19 outbreak at Little Rock in this April 13 file photo.

The blue tape lines separating shoppers by 6 feet at the grocery store checkout aren't helpful to a blind person.

New drive-thru and curbside pickup options at restaurants aren't either.

And for drive-thru covid-19 testing sites to be accessible, the blind would have to either walk or find people willing to drive them, which could put the drivers at risk of contracting the illness.

While the state has made some public health information more accessible to the blind -- online and in daily briefings -- advocates have lingering concerns about accommodations in the world of covid-19, the disease caused by the new coronavirus.

These concerns are shared among the blind in nearly every state, said Chris Danielsen, a national federation spokesman. The federation is an advocacy group based in Baltimore.

The Central Arkansas chapter's goals are largely focused on facilitating access to information, letting businesses know how to accommodate the blind, and having the most accessible methods for coronavirus testing. Blachowicz suggested that restaurants, for example, let people walk through drive-thru lanes.

Information on whether covid-19 testing sites provide accommodations for the blind would need to come from individual sites, said Danyelle McNeill, an Arkansas Department of Health spokeswoman. But drive-thru sites test passengers as well as drivers, and "many do allow people to walk up," she said.

Blachowicz said he hasn't been able to get a clear answer from companies offering testing.

"What if you're a blind person who does not have a car?" Danielsen said.

Among other needed modifications, Danielsen said, a simple extra layer of tape to mark grocery store social-distancing recommendations could allow the blind to feel the bumps in the floor with their canes.

Blachowicz last week reached out to Dr. Nate Smith, the Arkansas Department of Health secretary, because he and others in his group couldn't see the charts and graphs used to convey information in the daily news briefings. After that, Smith started describing the graphs each day.

In addition, the department had the Information Network of Arkansas assess its covid-19 page and found that it was 96% compliant with the Americans with Disabilities Act. Department employees made table versions of the graphs so they could be read aloud by computer software, department spokeswoman Meg Mirivel said in an emailed response to questions.

They also added "alternative text" to Facebook photos so it could be read aloud, Mirivel added.

The Division of Services for the Blind, which operates under the state Department of Commerce, is offering free readings through the Arkansas Information Reading Services.

The service gives audio updates on news about the coronavirus, as well as other topics. The number to listen to programs in Arkansas is (844) 888-0981, said Alisha Curtis, a spokeswoman for the Department of Commerce.

The division also has several staffers working on programs such as Vocational Rehabilitation, Supported Employment, Older Individuals Who are Blind and Independent Living Rehabilitation Services to make sure the blind continue to receive services such as eye appointments, counseling and guidance.

Some appointments are by phone or other virtual methods, Curtis said.

For blind people working or learning from home, the division also offers technical support, she added.

Elizabeth Scheller, president of the Arkansas Association of Blind Students, said she's fielded calls from a couple of college students concerned about how they're going to work from home under certain online learning programs.

"There are some scenarios where everything being switched online has made it a little bit problematic for people who are blind," Scheller said.

But most Arkansas professors and instructors have been willing to work through issues with students -- a simple email has solved the problems she's heard about so far, she said.

Blachowicz said that from his experience, it seems more complex for businesses and government entities to make everything accessible to the blind during the coronavirus pandemic. He's hopeful that bringing attention to the problems will be enough impetus for officials to fix them.

"We're being positive about social distancing, we're doing our part, but we do need to level the playing field," Blachowicz said.