Socially isolating dad, mom and kids clean up the river in their own backyard 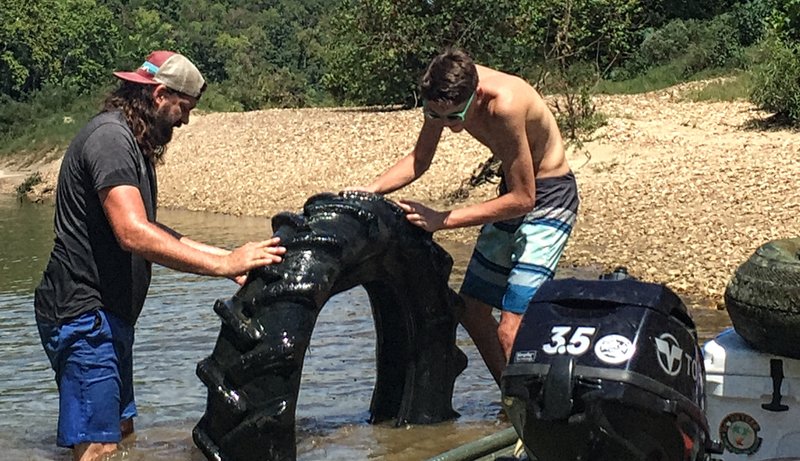 Michael Sacomani (left) and son Mason check out the tractor tire they found in the Saline River. the family spent its pandemic social distancing time in spring 2020 boating the Saline River from their yard and hauling out trash. (Special to the Democrat-Gazette/Michael and Tonya Sacomani)

Michael and Tonya Sacomani and their kids were really looking forward to their cruise on the western Caribbean. For more than six months, they and their sons Mason and Cohen had planned this overseas family adventure for the boys' spring break from school. Then came the covid-19 pandemic.

With any and all overseas cruising out of the question, the Sacomanis decided to make the break special anyway, with a camping staycation in their own backyard in Benton. Their yard backs up to the Saline River.

Although disappointed by the cancellation, Michael Sacomani says that, since most of their favorite recreation involves the Saline, it was an easy decision to pull their camper to the lower end of their property and set up a home base on the shore. Although their house was within view of their campsite, the family was determined to sever ties with their normal routine. They spent the time fishing, gathering around cozy campfires and relaxing at the camper, with no one venturing to the house.

By the time spring break ended, they were ready to return to their normal routine. But "normal" was gone. The pandemic had worsened.

Harmony Grove School District had suspended on-site instruction. Mason, 18, and Cohen, 14, are confined to home like all the rest of Arkansas' students and continuing their education online using Alternative Methods of Instruction.

With the state's recommended guidelines for dealing with the pandemic focused on avoiding social gatherings, Michael and Tonya shut down their business — Saline River Canoe.

As it had for others across the country, the foreseeable future of the Sacomani family's world did not extend beyond the boundaries of their property line. But Michael reasoned that if he had to be confined to a limited area, there was no place he'd rather be than right where he was, on the banks of the Saline River.

EARLY DAYS ON THE RIVER

Michael Sacomani was 15 years old when his family moved from Arizona to Benton. His new home was within half a mile of the Saline River. Since the day neighborhood friends introduced him to the river, it has been the setting for many of his favorite recreation activities.

Michael grew up to marry Tonya Easley, a speech-language pathologist, and became a family man. But even as the couple were busy raising their sons, and Michael was working full time in construction, he maintained a close connection to the river. He nurtured the idea of cultivating a career involving the river. In 2009, he and Tonya decided to take the plunge when they opened Saline River Canoe.

Operating the full-service outfitter operation, which offers canoe/kayak rental, paddleboard instruction, shuttle/guide service, and catering events such as weddings on the river, commanded the bulk of his time. But he continued to do home repairs part-time and managed some rental property that the couple own.

Even before opening the business, Michael often volunteered his time to clean up the Saline. After he began operating a business dependent on the river, he felt an even stronger personal responsibility for taking care of it. He has tried to instill this responsibility in Mason and Cohen by including them in his general cleanup outings. 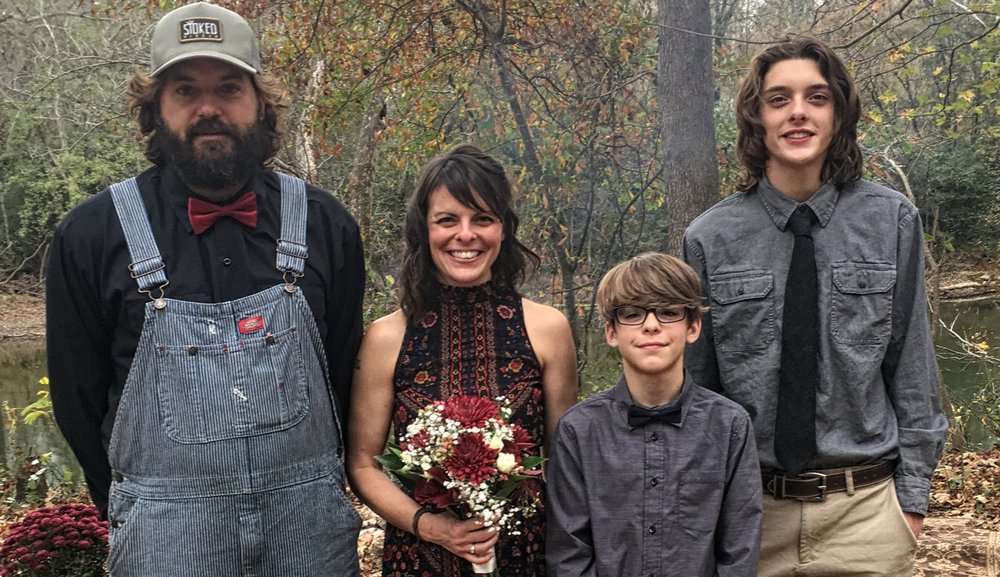 Michael, Tonya, 14-year-old Cohen and 18-year-old Mason Sacomani are boating up and down the Saline River and hauling out trash. (Special to the Democrat-Gazette/Michael and Tonya Sacomani)

This spring, with his high-energy teenagers forced into isolation, he knew they needed a worthwhile project to burn off some of that energy, so he increased the family's river cleanup patrols.

The Sacomanis had pretty much adopted a 20-mile stretch of river that flowed past the outfitter business as their responsibility to maintain, beginning some 15 miles upriver from the business and extending another five miles downstream. When they began their self-imposed quarantine, he decided their objective would be to get this stretch of river to what he calls "maintenance mode."

This was a term he had learned from "the king" of river cleanups, Cowper Chadbourn. (Read about one of his adventures here.) "Maintenance mode" describes a waterway that only requires relatively easy occasional litter patrols, one where they would not have to remove large tires or refrigerators or other appliances. The heavier, large debris requires special arrangements to be hauled out.

In maintenance mode, a cleanup foray along the Saline would only collect a bag or two of single-use drink containers, plastic bags and other small items.

The Sacomani family began their social-distancing cleanup project by breaking up their 20-mile stretch of river into five-mile segments. They would leave a vehicle at the takeout location, then haul their boats up to the put-in and work their way back down the river. 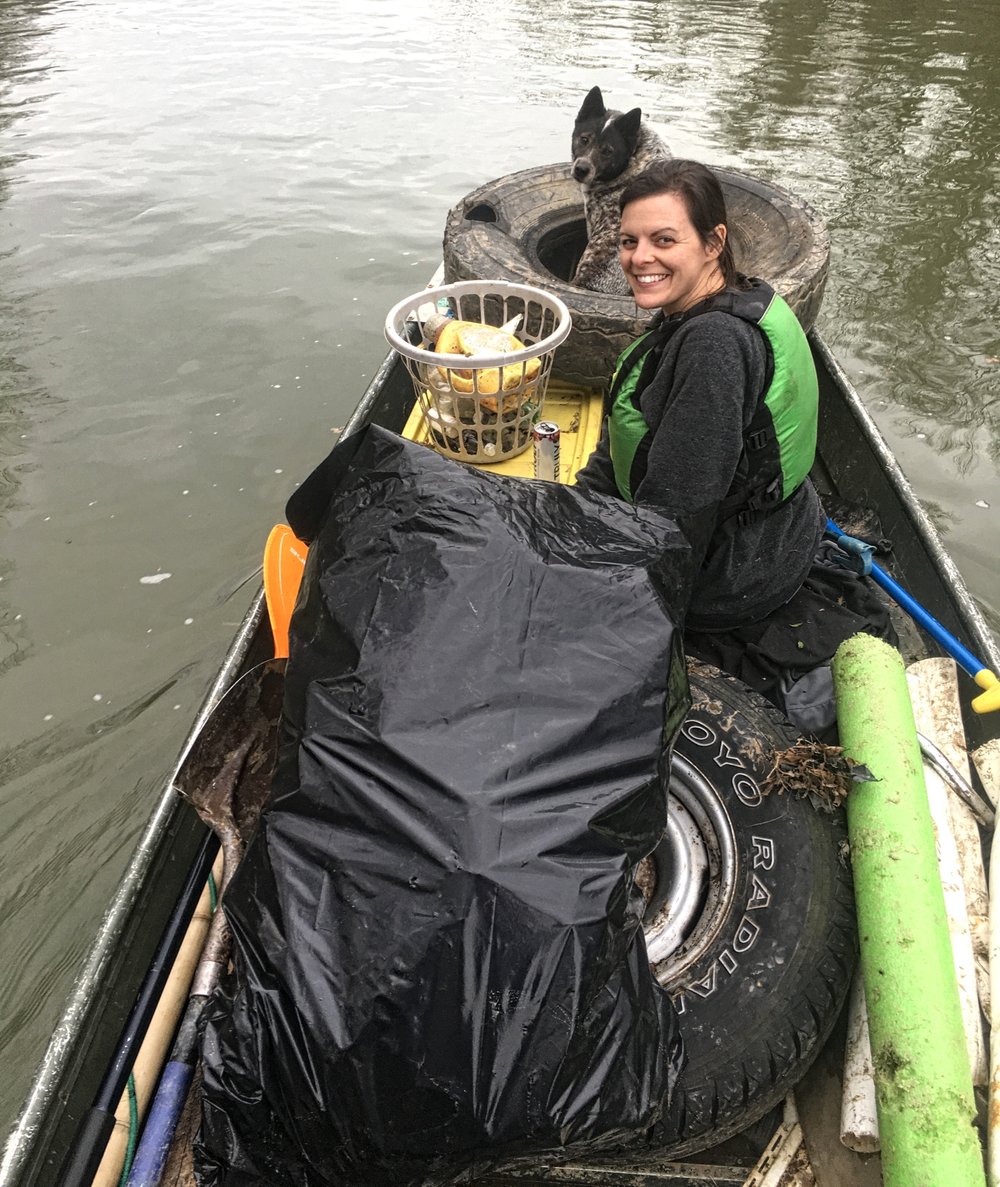 Tonya Sacomani is almost crowded out of the boat by trash she and her family hauled from the Saline River. (Special to the Democrat-Gazette/Michael and Tonya Sacomani)

Even with members of their group dropping an occasional fishhook in the water during the float and exploring anything on the riverbanks that attracted their attention, they were generally able to clean up a five-mile section in about eight hours.

As the social distancing period has continued, and with their adopted section of river in "maintenance mode," they have broadened the range of their cleanups.

For these new, major cleanup excursions, Sacomani normally would recruit volunteers from Friends of Saline, a nonprofit organization Sacomani formed to help maintain the river. During the pandemic, they decided to keep it in the family.

He says it is always an adventure to expand their cleanup excursions beyond their regular routes. Unless their 20-mile section has undergone a serious flood, most of those trips are fairly routine. However, when branching out into sections that had not been given a thorough cleaning for months or even longer, it can be interesting, to say the least, to discover items that have made their way into the river. 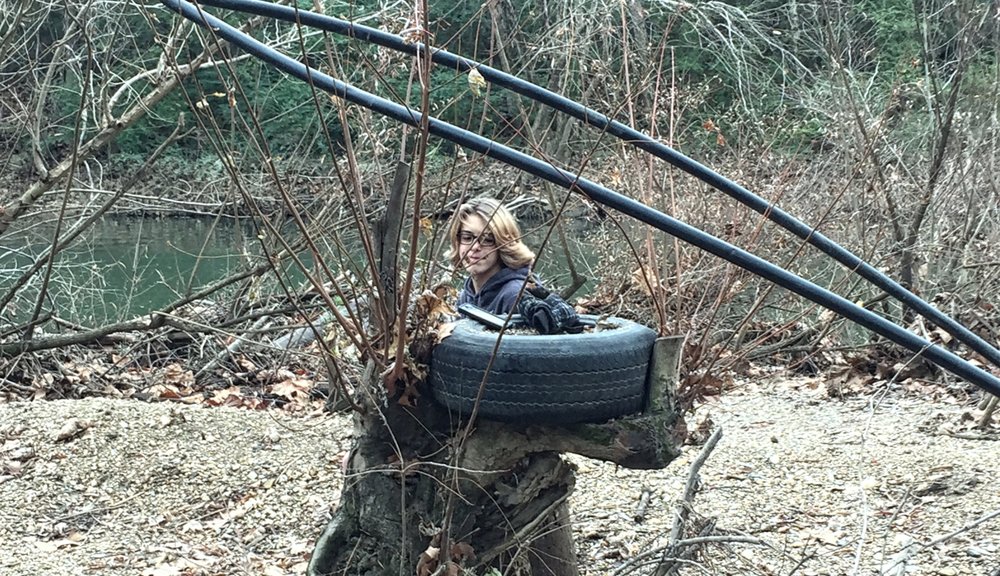 Cohen Sacomani gathers an assortment of trash on the shore of the Saline River. (Special to the Democrat-Gazette/Michael and Tonya Sacomani)

Found: Tires by the hundreds, some being large tractor tires that were buried so deep in mud that only their tops were visible. Full sets of automobile tires still mounted on custom wheels. Refrigerators, stoves, other household appliances.

They have also found ski boats lodged in trees on shallow river shoals. Often, they have been able to patch up these battered crafts enough to float them to an accessible takeout. Other, more heavily damaged boats, they have had to cut up into manageable pieces small enough to haul in their boats to a location they can reach by car. From there, they take these boat chunks to the landfill.

Sacomani says that the most unusual piece of trash they have found on the river was a hot tub lodged high in a tree. Even with one corner of the tub completely broken away, Tonya was able to balance herself in the tub's opposing corner and paddle it downriver to the takeout. 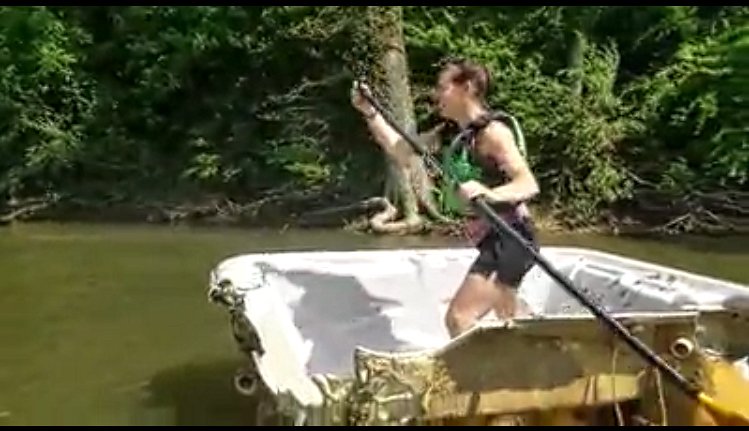 Tonya Sacomani paddles a hot tub that Friends of Saline found lodged high in a tree on the Saline River during a litter patrol. (Special to the Democrat-Gazette/Michael and Tonya Sacomani)

He has aspirations of someday experiencing a ­rare river discovery — like the one made by Charles Greene of Benton. On Aug. 21, 1999, Greene found a dugout canoe that could be more than 800 years old at Peeler Bend, just upstream from the site of today's Saline River Canoe. According to the Central Arkansas Library System Encyclopedia of Arkansas, radiocarbon dating estimates the canoe was made between AD 1160 and 1300.

For years the Benton resident had floated past the canoe while fishing, thinking it was just a log mostly obscured by the mud. One day, when the water level was unusually low, he stopped to get a better look. He decided it was too straight to be a log.

The canoe is believed to have belonged to the Caddo people. The craft was built without the use of modern tools. Caddo craftsmen would have packed the sides of the 24-foot canoe with mud and then burned the middle, making it easier for them to scrape out the burnt wood with stone tools.

The canoe is on display in Benton, at The River Center.

Another similarly historic dugout has also been found in the same general area of the Saline River. With two of these very rare artifacts having been discovered on the river, Sacomani believes the area must have been a popular float for American Indians and that his chances of discovering a third vessel are "pretty good."

In his 20-year experience with the river, he has witnessed many changes in its main channel. He likes to think that, maybe, the next big heavy rainfall will result in the water altering its path once again, uncovering yet another ancient canoe buried in the rich mud that borders his river.