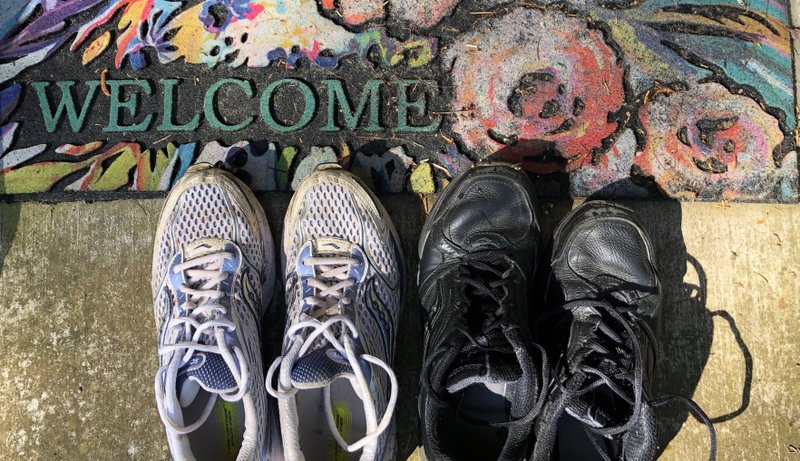 Using a precious disinfectant wipe to clean shoes is not recommended by infectious disease experts and shoes are not considered a covid-19 threat except in disease-laden places; but many shoes can be washed in a washing machine, or simply not worn inside the house. (Arkansas Democrat-Gazette/Celia Storey)

Many people are fearful about tracking the covid-19 virus into their homes on their clothes, their shoes, the mail and even the newspaper.

The New York Times reached out to infectious disease experts, aerosol scientists and microbiologists to answer reader questions about the risks of coming into contact with the virus during essential trips outside and from deliveries. While we still need to take precautions, their answers were reassuring.

Should I change my clothes and shower when I come home from the grocery store?

For most of us who are practicing social distancing and making only occasional trips to the grocery store or pharmacy, experts agree that it's not necessary to change clothes or take a shower when you return home. You should, however, always wash your hands. While it's true that a sneeze or cough from an infected person can propel viral droplets and smaller particles through the air, most of them will drop to the ground.

Studies show that some small viral particles could float in the air for about half an hour, but they don't swarm like gnats and are unlikely to collide with your clothes.

"A droplet that is small enough to float in air for a while also is unlikely to deposit on clothing because of aerodynamics," said Linsey Marr, an aerosol scientist at Virginia Tech. "The droplets are small enough that they'll move in the air around your body and clothing."

Why is it that small droplets and viral particles don't typically land on our clothing?

I asked Marr to explain further, since we're all getting a mini lesson in aerodynamics.

"The best way to describe it is that they follow the streamlines, or air flow, around a person, because we move relatively slowly. It's kind of like small insects and dust particles flowing in the streamlines around a car at slow speed but potentially slamming into the windshield if the car is going fast enough," Marr said.

"Humans don't usually move fast enough for this to happen," Marr continued. "As we move, we push air out of the way, and most of the droplets and particles get pushed out of the way, too. Someone would have to spray large droplets through talking -- a spit talker -- coughing or sneezing for them to land on our clothes. The droplets have to be large enough that they don't follow the streamlines."

So, if you're out shopping and somebody sneezes on you, you probably do want to go home, change and shower. But the rest of the time, take comfort that your slow-moving body is pushing air and viral particles away from your clothes, a result of simple physics.

Is there a risk that the virus could be in my hair or beard?

For all the reasons outlined above, you should not be worried about viral contamination of your hair or beard if you are practicing social distancing. Even if someone sneezed on the back of your head, any droplets that landed on your hair would be an unlikely source of infection.

"You have to think through the process of what would have to happen for someone to become infected," said Dr. Andrew Janowski, instructor of pediatric infectious diseases at Washington University School of Medicine St. Louis Children's Hospital. "You have someone who sneezes, and they have to have X amount of virus in the sneeze. Then there has to be so many drops that land on you."

"Then you have to touch that part of your hair or clothing that has those droplets, which already have a significant reduction in viral particles," Janowski said. "Then you have to touch that, and then touch whatever part of your face, to come into contact with it. When you go through the string of events that must occur, such an extended number of things have to happen just right. That makes it a very low risk."

Should I worry about doing laundry and sorting clothes? Can I shake viral particles loose from my clothes and send them into the air?

The answer depends on whether you're doing routine laundry or cleaning up after a sick person.

Routine laundry should not cause worry. Wash it as you normally would. While some types of viruses, like the norovirus, can be tough to clean, the new coronavirus, like the flu virus, is surrounded by a fatty membrane that is vulnerable to soap. Washing your clothes in regular laundry detergent, following the fabric instructions, followed by a stint in the dryer is more than enough to remove the virus -- if it was even there in the first place.

"We do know that viruses can deposit on clothing (from droplets) and then be shaken loose into the air with movement, but you would need a lot of viruses for this to be a concern, far more than a typical person would encounter while going for a walk outdoors or going to a grocery store," Marr said.

The exception is if you are in close contact with a sick person. The Centers for Disease Control and Prevention recommends that you wear gloves when cleaning up after someone who is sick, and take care not to shake laundry and bedding. Use the warmest water setting possible and dry completely. You can mix laundry from an ill person with the rest of the household load. But just leaving laundry to sit for a while also reduces risk, because the virus will dry out and decay.

"We know these types of viruses tend to decay faster on fabric than on hard, solid surfaces like steel or plastic," Marr said.

So how long can the virus remain viable on fabric and other surfaces?

Most of what we know about how long this novel coronavirus lives on surfaces comes from an important study published in The New England Journal of Medicine in March. The study found that the virus can survive, under ideal conditions, up to three days on hard metal surfaces and plastic and up to 24 hours on cardboard.

But the study did not look at fabric. Still, most virus experts believe that the cardboard research offers clues about how the virus probably behaves on fabric. The absorbent, natural fibers in the cardboard appeared to cause the virus to dry up more quickly than it does on hard surfaces. The fibers in fabric would be likely to produce a similar effect.

A 2005 study of the virus that causes severe acute respiratory syndrome, another form of coronavirus, provides further reassurance. In that study, researchers tested increasingly large amounts of viral samples on paper and on a cotton gown. Depending on the concentration of the virus, it took five minutes, three hours or 24 hours for it to become inactive.

"Even with a relatively high virus load in the droplet, rapid loss of infectivity was observed for paper and cotton material," the researchers concluded.

Should I be concerned about the mail, packages or the newspaper?

The risk of getting sick from handling mail or packages is extremely low and, at this point, only theoretical. There are no documented cases of someone getting sick from opening a package or reading a newspaper.

But that doesn't mean you shouldn't take precautions. After handling mail or packages or reading the newspaper, dispose of the packaging and wash your hands. If you still feel especially anxious about it, take guidance from the New England Journal study and just let mail and packages sit for 24 hours before handling them.

How much should I worry about contamination if I go outside to walk the dog or exercise?

Your chances of catching the virus when you go outdoors is extremely low, provided you're keeping a safe distance from others.

"Outdoors is safe, and there is certainly no cloud of virus-laden droplets hanging around," said Lidia Morawska, professor and director of the International Laboratory for Air Quality and Health at Queensland University of Technology in Brisbane, Australia.

"Firstly, any infectious droplets exhaled outside would be quickly diluted in outdoor air, so their concentrations would quickly become insignificant," Morawska said. "In addition, the stability of the virus outside is significantly shorter than inside. So outside is not really a problem, unless if we are in a very crowded place -- which is not allowed now anyway. It is safe to go for a walk and jog and not to worry about the virus in the air, and there is no need for an immediate washing of the clothes."

I've read that when I get home from a trip outside I should remove my shoes and wipe them down. Should I waste my precious disinfectant wipes on my shoes?

Shoes can harbor bacteria and viruses, but that doesn't mean they are a common source of infection. A 2008 study commissioned by Rockport Shoes found a lot of gross stuff, including fecal bacteria, on the soles of our shoes. A recent study from China found that among health care workers, half had coronavirus detected on their shoes, which is not unexpected since they worked in hospitals with infected patients.

So what should we do about our shoes? If your shoes are washable, you can launder them. Some readers asked about cleaning the soles of their shoes with a wipe. That is not recommended. Not only does it waste a good wipe (they are still in short supply), but it brings germs that would stay on the sole of your shoe or on the ground directly to your hands.

You can try not to think about what's lurking on your shoes -- or you can have a conversation with your family about becoming a shoe-free household. If you have a child who crawls or plays on the floor, a family member with allergies, or someone with a compromised immune system, a shoe-free home might be a good idea for general hygiene.

Janowski said shoes are not a big worry for contracting coronavirus, but it might make you squeamish if you think about where your shoes have been.

"If you want to talk about bacteria, we know bacteria love to live on shoes," Janowski said. "You never know what you stepped in."