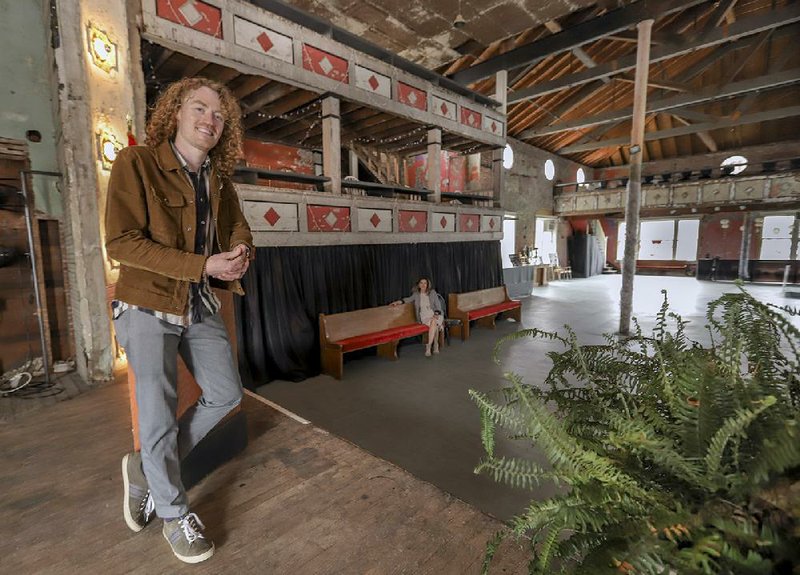 Matthew McCoy (left) and his mother, Kerry McCoy, are seen Friday afternoon inside the Dreamland Ballroom on West Ninth Street in Little Rock. The 100-year-old facility has received a National Park Service grant for accessibility upgrades and other modifications. (Arkansas Democrat-Gazette/John Sykes Jr.)

Matthew McCoy (left) and his mother, Kerry McCoy, are seen Friday afternoon inside the Dreamland Ballroom on West Ninth Street in Little Rock. The 100-year-old facility has received a National Park Service grant for accessibility upgrades and other modifications. (Arkansas Democrat-Gazette/John Sykes Jr.)

Two grants totaling about $535,000 from the National Park Service will help make Dreamland Ballroom fully accessible to the public and preserve the history of Little Rock’s first affluent black neighborhood.

Earlier this month, the agency announced that it was awarding $14 million in African American Civil Rights Historic Preservation Fund grants to 51 projects across the country. Two of the projects are in Little Rock.

Renovations to Dreamland Ballroom will get $499,723, and $35,000 will go to the city for a project to survey the University Park neighborhood for nomination to the National Register of Historic Places.

This is the second such grant the nonprofit Friends of Dreamland has received to fund its effort to restore the historic downtown venue; the first came in 2018.

Built between 1916 and 1918, the Dreamland Ballroom in Taborian Hall was once a tour stop for legendary black entertainers such as B.B. King, Ella Fitzgerald and Ray Charles, when Ninth Street was the center of black business and culture in Little Rock, according to the Encyclopedia of Arkansas.

The site had lost its grandeur by the 1970s, and in the 1990s became the location of Arkansas Flag and Banner. Kerry McCoy, who owns the building and the business, wanted to restore the historic ballroom but initially had trouble finding a way to pay for the project, leading her to start the nonprofit Friends of Dreamland in 2009, her son Matthew McCoy said. He is the nonprofit’s executive director.

Private events such as wedding receptions can be held at the ballroom, but it needs accessibility upgrades for public or government events, McCoy said.

It’s currently only reachable by stairs and does not have a bathroom that complies with the Americans With Disabilities Act. The grant money will fund those modifications, as well as central air conditioning, and repairs and replacements for windows around the building.

McCoy said the funding is a “game-changer” and will make the ballroom ready for public events.

“It really creates a lot of barriers with it not being accessible,” he said. “This is really going to be a dream come true. It’s been 30 years in the making, pretty much.”

Because the ballroom takes up the entire square footage of the third floor, the nonprofit is building an addition onto the building that will contain an elevator to “avoid disrupting the integrity of that space,” McCoy said.

Once completely accessible, the space will be a mid-sized venue with a unique character, he said, a physical space that contextualizes the city’s history.

“When people start playing up there, it’s like, this is what this place is made for,” McCoy said. “There’s some spiritual component, there’s some energy up there. The ghosts really carry the sound.”

There’s not yet a timeline for the project’s completion, but McCoy said he hopes it will be in the next few years.

In a news release from the National Park Service, U.S. Rep. French Hill said Taborian Hall would have likely been demolished if not for the McCoys’ “vision of restoring it to its former glory.”

“I commend the National Park Service for allocating nearly $500,000 to renovate and preserve this site and recognize its importance in the struggle for equality,” said Hill, the Little Rock Republican.

A separate grant — worth $35,000 — will fund an architectural survey and nomination of the University Park district to the National Register of Historic Places, as well as to conduct oral history interviews with longtime residents.

“I thought, ‘Well, this needs to be documented more than here,’” Powell said.

When she became the group’s president, Powell began talking to staff members in the Little Rock Planning and Development Department about getting the district recognition for its history.

The neighborhood is just south of Interstate 630 and is roughly bordered by Arthur Drive, South Hughes Street and 12th Street. It has approximately 160 single-family and duplex residential units.