State's official virus count at 1,923, but positive tests from prison still coming in; deaths rise to 42 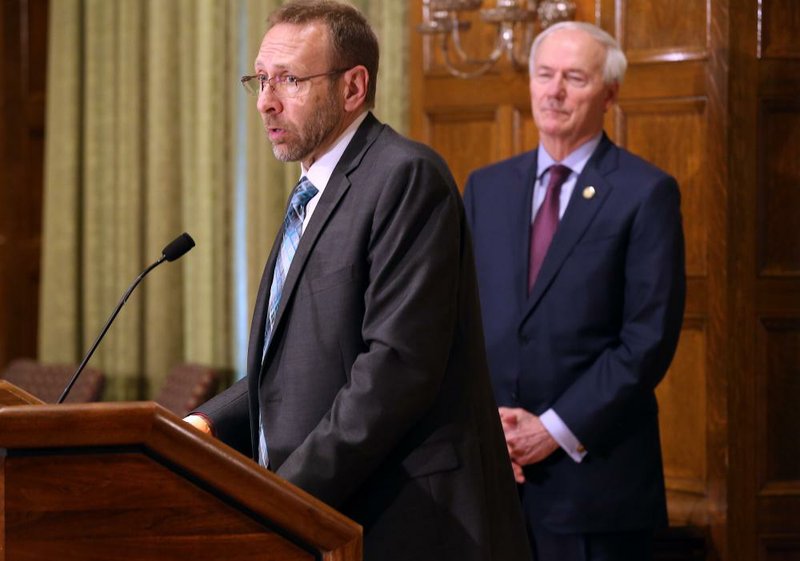 FILE — Dr. Nate Smith (left), Secretary of Health, gives the new numbers of covid-19 cases as Gov. Asa Hutchinson looks on during a press briefing on Wednesday, April 8, 2020, at the state Capitol in Little Rock.

The number of covid-19 infections in Arkansas surpassed 2,000 on Monday, according to officials who combined testing results from the Health Department and a growing outbreak at the Cummins Unit prison.

The official count of positive cases tallied by the Arkansas Department of Health stood at 1,923 Monday, an increase of 142 from the day before, according Health Secretary Nate Smith. However, Smith said that number did not include about 250 positive tests from the Cummins Unit.

More than 600 cases have now been confirmed at the 1,800-bed prison farm, Smith said Monday. The Department of Health has relied on the Department of Veterans Affairs hospital in Little Rock and commercial labs to rapidly conduct over 1,000 tests at the prison, and some of those results have been slow to show up in Health Department data, he explained.

The number of Arkansas deaths from the coronavirus totaled 42 on Monday, Gov. Asa Hutchinson said. The number of people in hospitals grew by five, to 93.

The governor also said that he had completed a conference call with Vice President Mike Pence Monday, at which he and other governors discussed options for expanding testing capacity. Hutchinson said that expanded testing in Arkansas was crucial to his plan to begin re-opening a limited number of services on May 4.

Current testing capacity is mostly limited to contract tracing, or testing people who have already been in contact with a known case, the governor said.

"We want to be able to expand that testing in Arkansas to be more broad surveillance testing," Hutchinson said.

The number of people in Arkansas who have died as a result of the coronavirus has passed 40, as the total confirmed cases in the state rose by 72, the state Health Department reported on Monday.

A total of 41 people have died since the first coronavirus case was reported in the state on March 11, the agency reports. At least 1,853 positive cases have been reported, while 738 people have recovered from the illness.

The Health Department’s count doesn’t include the number of infected inmates in prisons in Arkansas. Gov. Asa Hutchinson said the new cases from the general population show a more accurate view of where the state is currently when it comes to the pandemic. He said he will be using a separate line in graphs to show the current situation at the Cummins Unit, where 348 positive cases were reported Sunday.

The governor and state health officials, will provide an update on the state’s covid-19 response at 1:30 p.m. Check back to watch the live video.

[Video not showing up above? Click here to watch » https://www.youtube.com/watch?v=rhbt9s0dLuk]