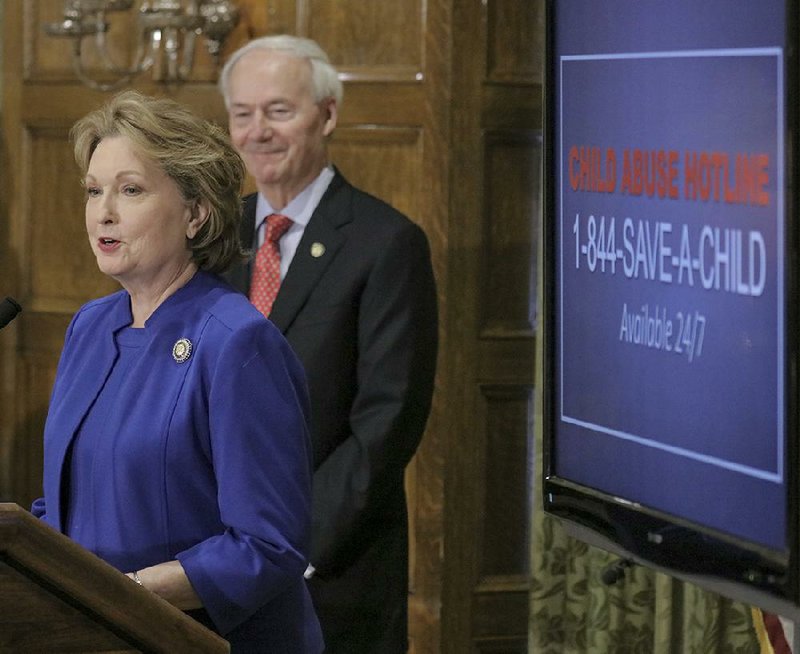 Arkansas first lady Susan Hutchinson talks about child abuse Monday during the governor’s news conference at the state Capitol in Little Rock. “With or without a virus, maltreatment of our children, our precious children and teens, does go on,” she said. (Arkansas Democrat-Gazette/John Sykes Jr.)

The number of covid-19 infections in Arkansas surpassed 2,000 on Monday, according to officials who were working to keep up with the rapid pace of new cases being reported at the Cummins Unit prison.

The outbreak at the prison has made rural Lincoln County -- population 13,024 -- one of the densest hot spots in the nation, according to an analysis by The New York Times. The paper counted 228 cases in Lincoln County on Monday, enough to place it among the top 20 counties in the country by cases per capita -- above other hot spots in New York City, New Orleans and Boston.

But the Times' figure was outdated by Monday, as state officials said the most recent numbers from the Cummins Unit more than doubled that amount, approaching 600 infections.

The official count of positive cases tallied by the Arkansas Department of Health stood at 1,923 Monday afternoon, an increase of 142 from the day before, according to Health Secretary Nate Smith. However, Smith said that number did not include hundreds of tests from the Cummins Unit that were still being entered into state logs. By Monday evening, the count on the state's website had risen to 1,971.

"Not all of the data from the Cummins Unit are in our system yet," Smith said. "We had quite a bit of testing over the weekend and overnight."

Meanwhile, the number of Arkansas deaths from the coronavirus totaled 42 on Monday, Gov. Asa Hutchinson said at his daily news briefing. The number of people in hospitals grew by five, to 93.

The governor also gave an update on his conference call with Vice President Mike Pence on Monday morning, during which, Hutchinson said, he and other governors discussed options for expanded testing capacity. Hutchinson has said that expanded testing in Arkansas is crucial to his plan to begin reopening a limited number of services on May 4.

Yet even if the state meets its May 4 target to begin lifting some restrictions, Hutchinson said, the state could still have to reverse course if infections begin to spike again.

"That is exactly the plan under the White House's guidance," Hutchinson said. "Obviously if we lift some restrictions and we see that we're increasing the number of cases or the other statistics are not going in the right direction, well, we can tighten it back down."

The Department of Health has relied on the John L. McClellan Memorial Veterans Hospital in Little Rock and commercial labs to rapidly conduct more than 1,000 tests at Cummins, and some of those results have been slow to show up in Health Department data, Smith explained Monday.

Wide-scale testing at the Cummins Unit, an 1,800-bed prison farm, began last week after infections skyrocketed in just a few days after the first inmate there tested positive on April 11.

Smith said testing had wrapped up in the barracks where officials determined that inmates were likely exposed. However, he said some outlying housing units are not being tested.

[Video not showing up above? Click here to watch » https://www.youtube.com/watch?v=rhbt9s0dLuk]

The health secretary said most of the infected people at Cummins remained asymptomatic, but that it was necessary to conduct so many tests because of the close quarters in which the inmates live.

The Arkansas Democrat-Gazette reported over the weekend that inmates were spending most of their days inside their open-style housing barracks, as prison officials attempt to manage the virus by limiting their movement to other parts of the prison.

"It just becomes very, very difficult to contain an outbreak, or even to know whether you've contained an outbreak, if you don't know who's positive, who's negative, who's exposed, who's not exposed," Smith said.

While the Health Department plans to eventually merge all of the cases from the Cummins Unit into its daily count, Smith said the department also plans to publish charts that show a rolling average of cases -- popularly known as "the curve" -- that separates prison cases from those in the general community.

Pointing to the number of asymptomatic cases at Cummins and the younger average age of the prison population when compared with the general public, both Hutchinson and Smith expressed optimism that the outbreak there would not strain hospital facilities with sick inmates.

"We're well prepared in terms of hospitals and care for those prisoners," Hutchinson told reporters Monday.

Potentially undercutting that assertion, however, a report released by the Kaiser Family Foundation on Monday stated that the people in prisons and jails are at an increased risk of falling seriously ill from the virus because of underlying health issues.

"Justice-involved individuals also face a variety of social challenges that are associated with poorer health and increased barriers to accessing health care," the report stated.

The Arkansas Division of Children and Family Services has received 3,148 reports to its child maltreatment hotline during the covid-19 pandemic, a nearly 50% decline in calls when compared with a similar period last year, officials said.

Division Director Mischa Martin said at the governor's news conference Monday that children are at increased risk of abuse when they are in isolation and away from mandated reporters, such as teachers.

Martin addressed the issue along with Arkansas first lady Susan Hutchinson, who serves on the board of the Children's Advocacy Center of Benton County and has made children's issues one of her main initiatives. April is National Child Abuse Prevention Month.

"With or without a virus, maltreatment of our children, our precious children and teens, does go on," Susan Hutchinson said. "The issue with the virus is that not that many people are interacting with our children."

Both Martin and Susan Hutchinson urged Arkansans who suspect abuse to call the child maltreatment hotline at 1-800-482-5964.

Coroner reports from Pulaski and Faulkner counties identified two of the state's victims of covid-19 as people over the age of 75.

While state health officials have announced the number of people who have died, they do not identify the victims. That information has been gathered by the newspaper from other sources, including coroner reports. Of the 27 victims of the disease identified by the Democrat-Gazette, 15 have been 75 or older.

Loren Cuffel of Clinton died April 10 at Conway Regional Medical Center, a day after his 79th birthday, according to a report from the Faulkner County coroner's office.

Both reports listed the cause of death as covid-19, the respiratory disease caused by the novel coronavirus.

The Pulaski County coroner's report, which gave more detail of Lewellen's illness, said she was admitted to the hospital on April 6 after complaining of respiratory distress and tested positive for covid-19 the next day.

The coroner's report listed several pre-existing conditions, including diabetes, hypertension and hypothyroidism. Lewellen's condition deteriorated and she was intubated before her death, the report stated.

The Democrat-Gazette was unable to reach a next of kin for either victim.