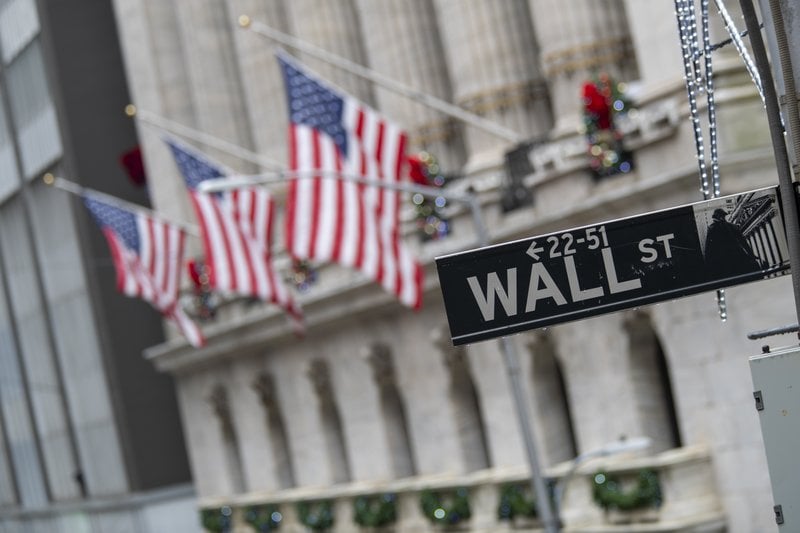 FILE - In this Jan. 3, 2020 file photo, the Wall St. street sign is framed by U.S. flags flying outside the New York Stock Exchange in New York. Global stocks are down, Friday, April 3, after the U.S. government said employers cut 701,000 jobs in March as they shut down or sharply curtailed business due to the coronavirus outbreak. (AP Photo/Mary Altaffer, File)

The extraordinary decline in economic activity around the world pushed the May delivery price of West Texas Intermediate crude into negative territory Monday, a never-before-seen scenario that implies that oil producers would have to pay buyers to take a barrel of oil off their hands.

It's mostly theoretical, though, because the world has a huge glut of oil. There's hardly anywhere to put additional barrels, and nobody is buying.

The sudden collapse mostly owed to the mechanics of the futures market, which closes for May delivery today. It was fleeting, and symbolic, more than anything, analysts said. It won't have much effect on the price of gasoline at the pump.

Yet the notion that a barrel of oil was worth less than zero was a shock to many.

"The May crude oil contract is going out not with a whimper, but a primal scream," said Daniel Yergin, a Pulitzer Prize-winning oil historian and vice chairman of IHS Markit Ltd.

"Refiners are rejecting barrels at a historic pace and with U.S. storage levels sprinting to the brim, market forces will inflict further pain until either we hit rock bottom, or [the coronavirus] clears, whichever comes first, but it looks like the former," said Michael Tran, managing director of global energy strategy at RBC Capital Markets.

The June futures price for West Texas Intermediate crude hovered around $20 a barrel Monday, about where it has been in recent weeks. That is still down heavily from where it was before the coronavirus pandemic.

Unless prices fall further -- considered a possibility -- the negative price of a barrel of oil recorded on Monday shouldn't affect the cost of energy for business and consumers.

But an economist at the University of Notre Dame doubts that that June price will hold steady. The June and July futures prices reflect increased demand for gasoline and jet fuel, said Gianna Bern, but she noted that demand in the transport sector is "at a standstill."

"In the coming days," she said, "I think we could see a weak WTI June contract."

Evidence the economy has been stymied by the virus is also seen in retail gasoline prices. The average price for gasoline in Arkansas on Monday was $1.47 a gallon, according to travel club AAA. Gas stations in Benton and Bryant were charging per-gallon prices below $1, according to Gasbuddy.com.

The national gas price average Monday was $1.81, down more than a dollar from a year ago. Fuel in 39 states cost less than $2 a gallon, on average.

"This moment is of course historical, and could not better illustrate the price-utopia that the [oil] market has been in since March, when the full scale of the oversupply problem started to become evident but the market remained oblivious," Louise Dickson of Rystad Energy wrote in a note. "Since then traders have sent prices up and down on speculation, hopes, tweets and wishful thinking. But now reality is sinking in."

Worsening the pain for American producers is a small fleet of tankers leased by the Saudis before the price war was called off and heading to the United States loaded with Saudi crude, according to reports. It would represent seven times the usual amount of oil that Saudi Arabia ships here in a typical month, and it comes even as the United States, which had regained its status as an oil exporter last year, has seen its export markets crumble.

"Today's collapse poses a devastating threat to our oil and gas sector, with job losses in the thousands and national security being weakened if the industry cannot recover," Sen. Kevin Cramer, R-N.D., said in a statement issued by his office Monday. "The dramatic low underscores why we cannot allow Saudi Arabia to flood the market, especially given our storage capacity dwindling. Right now, the highest number of Saudi oil tankers in years is on its way to our shores. Given today's news, I call on President Trump to prevent them from unloading in the United States."

North Dakota is a major oil-producing state, sitting atop the Bakken shale formation, but the break-even price there is as much as $45 per barrel.

Nothing like this happened in the oil market in the worst of the Great Depression, or in the early years of the Civil War, the two previous low points for petroleum prices, according to Bob McNally, head of the Rapidan Energy Group.

The cause is the world's glut of oil, mixed with a fall in demand of between 25% and 30%. As oil-producing nations kept pumping through March and into early April, storage capacity neared the brink -- and what little is left has already been tied down with leases. There are fewer places to put additional oil.

A Saudi-Russian price war was somewhat resolved April 12, when both sides together with the other main countries in the Organization of the Petroleum Exporting Countries agreed to cut production by a purported 10 million barrels a day, or about 10% of global output. But that still is less than the decline in consumption, and oil stockpiles have continued to grow.

Canadian oil companies, which were not parties to the OPEC-Russia agreement, have started to shut down the wells in the sand tar regions of Alberta. There, too, oil was trading in negative amounts Monday.

"Shutting in production is a very painful decision for an operator to make -- often the economics support running a well at a loss for a certain period of time rather than shutting down the project completely," said Teodora Cowie, a Rystad Energy oil analyst. "But with infrastructure constraints, this is no longer an option for many landlocked producers."

"The market is starting the painful process of balancing supply against a smaller demand outlook of about 70 million bpd [barrels per day]," wrote Reid Morrison, an energy analyst with PwC. "The economic situation is locked up with no real clarity about what lies ahead, so there's no reason to expect demand to increase over the near term."

There are signs of weakness everywhere. Even before Monday's plunge, buyers in Texas were offering as little as $2 a barrel last week for some oil streams. In Asia, bankers are increasingly reluctant to give commodity traders the credit to survive as lenders grow ever more fearful about the risk of a catastrophic default.

In New York, West Texas Intermediate for May delivery dropped as low as negative $40.32 a barrel. It's far below the lowest level previous seen in continuation monthly data charts since 1946, just after World War II, according to data from the Federal Reserve Bank of St. Louis. Brent crude declined 8.9% to $25.57 a barrel.

Crude stockpiles at Cushing -- America's key storage hub and delivery point of the West Texas Intermediate contract -- have jumped 48% to almost 55 million barrels since the end of February. The hub had working storage capacity of 76 million barrels as of Sept. 30, according to the Energy Information Administration.

Information for this article was contributed by Will Englund of The Washington Post and by Catherine Ngai, Olivia Raimonde and Alex Longley of Bloomberg News. 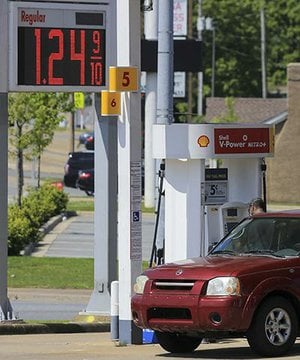 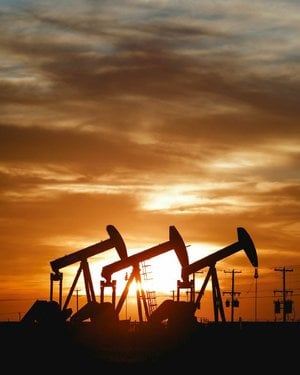 Photo by Odessa American
The sun sets behind an array of pump jacks outside Midland, Texas on Friday, April 17, 2020. (Odessa American/Eli Hartman)