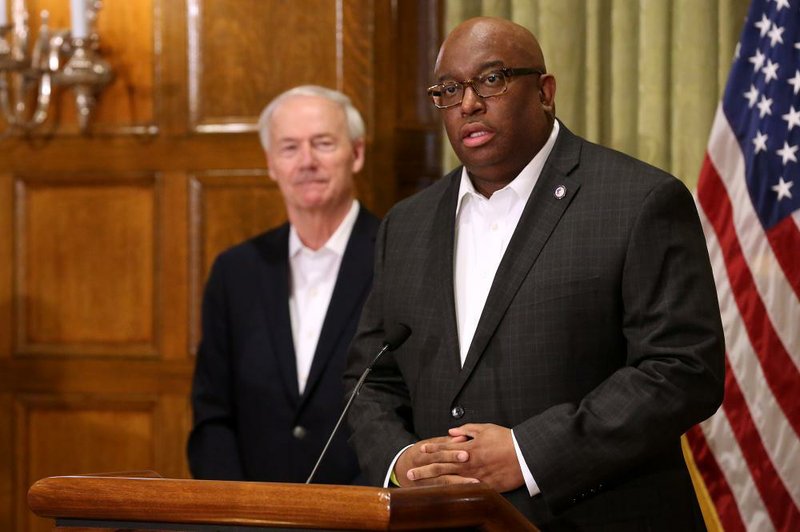 Dexter Payne, director of the Arkansas Department of Corrections, talks about how the ADC is separating inmates with covid-19 at the Cummins Unit during the daily press briefing on Sunday, April 19, 2020, at the state Capitol. ( Arkansas Democrat-Gazette / Thomas Metthe)

Inmates at three state prisons filed a federal class-action lawsuit Tuesday over the spread of coronavirus within the system, seeking to force the release of elderly and medically frail inmates from crowded prisons, and better access to disinfectants and hygiene products.

The lawsuit comes as infections at the state's largest prison, the Cummins Unit, flared to more than 600 cases, making it one of the densest coronavirus hot spots in the country.

The suit alleges that prison officials violated inmates' rights by forcing them to live together -- less than 6 feet apart -- in crowded barracks, without supplies of soap, hand sanitizer or other disinfectants to fight the virus.

One plaintiff, a man in his 20s identified in the complaint as "John Doe," is claimed by his attorneys to be among the inmates at the Cummins Unit who tested positive for the virus and was quarantined.

The other 10 men named in the complaint are housed at Cummins, as well as the Varner and Ouachita River units. At the latter prisons, the virus has yet to be detected among the inmate population.

The inmates who are plaintiffs have a variety of preexisting conditions that make them especially vulnerable to the virus, including heart disease, asthma and cancer, according to the complaint.

Four plaintiffs claimed that they exhibit symptoms of covid-19, but have not been tested.

The lawsuit was filed in federal court Tuesday by attorneys with the American Civil Liberties Union and the NAACP Legal Defense and Educational Fund, in addition to firms in Little Rock, New York and New Haven, Conn. It is being supported by the work of attorneys for Disability Rights Arkansas and Squire Patton Boggs. The potential class of plaintiffs includes thousands of incarcerated individuals in Arkansas, according to the complaint.

"Some Plaintiffs continue to physically interact with well over a hundred people each day, often without PPE [personal protective equipment] or ready access to hygiene products," the complaint states. "Corrections officers and prisoners serving meals often do not properly use masks and gloves -- if they use them at all -- exposing everyone to transmission of the virus."

The complaint alleges that such deficiencies in the prison system's response to the virus violate the inmates' constitutional rights and protections established by the Americans with Disabilities Act.

In responding to the lawsuit, Gov. Asa Hutchinson and Attorney General Leslie Rutledge asserted that prison and health officials were taking effective measures to protect inmates.

Measures taken by the Department of Corrections to slow the spread have included having inmates produce and distribute masks; canceling visitations; and quarantining those who are sick.

A spokeswoman with the Department of Corrections declined to comment on the pending litigation.

Outbreaks of the virus have also been detected at a federal prison in Forrest City and a state Division of Community Corrections facility in Little Rock.

The state's prison system houses more than 16,000 inmates on any given day, most of who are assigned to large units that operate beyond their designed capacity, according to department records.

Among the aims of the class-action lawsuit is to have a court-appointed special master determine how many prisoners each unit can house while also abiding by Centers for Disease Control and Prevention guidelines to control the spread of the virus.

Inmates who are older than age 50, disabled or who have serious underlying medical conditions should be considered for immediate release or transfer to home confinement, the complaint states.

Judge Kristine Baker of the U.S. District Court for Eastern Arkansas was assigned to hear the case.

On Sunday, Hutchinson directed the department and the state Parole Board to begin screening nearly 2,000 inmates who have been identified for potential release during the pandemic. Those inmates should be nonviolent offenders who are already approaching their release dates, the governor said.

At his daily news conference Tuesday, Hutchinson addressed the timeline of that review, saying, "that will be a longer process."

All but two of the prisoners named in the lawsuit are unlikely to be considered for release under the governor's parameters because of the violent nature of their convictions, according to a review of their case histories.

Holly Dickson, the interim director of the ACLU of Arkansas, said that even if those inmates flagged for review by the governor are eventually released from prison, it will be an inadequate step to protect those who remain locked up. She pointed to guidance from the CDC that suggests that many prisoners have medical conditions that put them at risk of falling seriously ill from covid-19.

"They're great steps, but they are too small of steps to be taking right now," Dickson said.

The lawsuit also seeks a judicial order requiring the department to provide inmates with hand sanitizer that is at least 60% alcohol. That kind of sanitizer is banned under prison department policy prohibiting alcohol in the units.

The supplies the lawsuit seeks to guarantee for prisoners include hand soap, paper towels, clean towels and facial tissues for self hygiene, as well as sponges, brushes and disinfectant to clean common areas.

The request is similar to one made in a separate federal lawsuit by inmates at a Texas prison for the elderly. U.S. District Judge Keith Ellison last week issued an injunction in that lawsuit, ordering the prison to provide inmates with alcohol-based hand sanitizer and other cleaning supplies.

That order is set to go into effect today, The Texas Tribune reported, while the state appeals the decision.

CORRECTION: A federal class-action lawsuit filed Tuesday on behalf of inmates at three state prisons is being supported by the work of attorneys for Disability Rights Arkansas and Squire Patton Boggs, a law firm based in New York. An earlier version of this article didn’t name all of the groups that are plaintiffs.