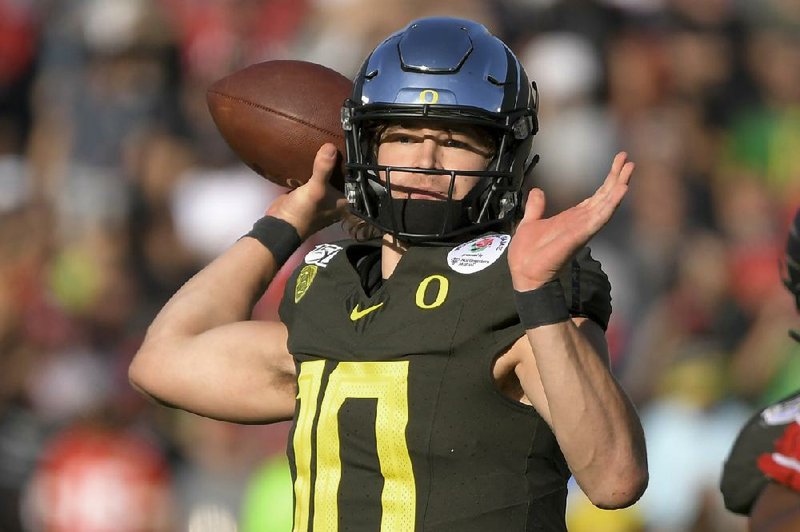 Justin Herbert was a successful quarterback at Oregon, but his suc- cess in the NFL could largely depend on an immeasurable quality. (AP file photo)

Sam Howell has been a quarterback since first grade.

His father told him then that to play the position he needed to be the leader of the team, and that more would be expected of him than other players, both on the field and off.

Howell, coming off a record-breaking freshman season at North Carolina, has come to think of quarterback as a lifestyle.

"I know everyone's looking at me," Howell said.

Evaluating and projecting quarterbacks at any level is probably the most challenging part of building a football team. More so than any other position, what makes a quarterback successful is almost impossible to measure or quantify -- that mysterious and ill-defined "It Factor."

"I don't think there is a science to it," said Ohio State Coach Ryan Day, who previously spent two seasons as a quarterback coach in the NFL under Chip Kelly. "If there was, I think it would be a lot easier for everybody. I think in 2020 they wouldn't still be asking what it means."

Joe Burrow, Tua Tagovailoa and Justin Herbert lead the next batch of quarterbacks set to enter the NFL. They are the consensus top three QBs available in this week's draft, all with a chance to be selected Thursday night within the first 10 picks.

Their prodigious skills, prolific production and impressive athleticism are obvious, as are their few physical shortcomings. The rest? Well, there is a reason why they are called intangibles.

In the era of personal quarterback coaches, 7-on-7 summer leagues and scholarship "offers" to eighth graders, the holistic development of quarterbacks begins early.

David Morris is the founder of QB Country and best-known for a college career spent as Eli Manning's backup at Mississippi. He works with all ages and talent levels of quarterbacks, from tweens aspiring to start for the JV team to Daniel Jones, who was selected No. 6 overall by the New York Giants last season.

For Morris, there are two aspects to the so-called intangibles.

One is mental capacity: The ability to learn and process football. That can show itself on the whiteboard or film room, breaking down plays and defenses. The hope is that transfers to the field, but not always.

Then there are the players whose mastery of the subject matter doesn't really shine through until they get between the lines.

For Morris, it's the difference between book smart and street smart. Both can be successful and most good players have at least some of each. There are readily available ways to identify and develop a player's mental capacity, though projecting its growth potential can be trickier.

The second intangible is more about personality and how it relates to leadership. One way or another, a quarterback has to be a team leader, whether he is gregarious or reticent, laid back or intense. Some quarterbacks will pick a teammate up with an optimistic "atta boy." Others get a point across more sternly.

"I've seen that many different personalities can get it done," Morris said. "And so whether he is vocal or dynamic or alpha or more reserved, is he a leader? How does he lead? And then is he confident in his leadership style?"

Confidence is a word that comes up a lot when it comes to elite athletes of all kinds. With quarterbacks, it is especially important because the position comes with such a harsh and unrelenting spotlight.

"You willingly chose to play the most scrutinized position in all of organized athletics," is a line in the quarterback handbook Oregon offensive coordinator Joe Moorhead gives to his signal-callers.

Moorhead said quarterbacks "should teeter on the bridge of confidence and cockiness."

Craig Young wasn't necessarily looking to develop his son into an elite quarterback when he identified confidence as the most important trait he could instill in Bryce, a five-star recruit who is now a freshman at Alabama.

"Not like this fake confidence," said Craig Young, who has worked as a mental health professional in southern California for about two decades. "But how do you build an intrinsic feeling of confidence that I know that I can do this?"

Craig Young crafted a plan for building confidence though preparation and supplemented by positive self-talk, such as mantras, sayings and slogans.

"And then the other one was really visualization. Visualizing yourself being successful," Craig Young said.

Bryce Young competed against the best quarterbacks in the country at various camps during his high school career, including the prestigious Elite 11.

Craig Young said the physical difference between players at that level is small. What separates them are those intangibles.

At Elite 11, former NFL quarterback Trent Dilfer and his group of instructors are trying to turn the art of evaluating quarterbacks into more of a science.

The documentary series on the 2016 Elite 11 competition was titled Welcome to the It Factory.

"I believe it's the most overused and undefined phrase, in sports" Pac-12 analyst and Elite 11 coach Yogi Roth said.

Roth and the Elite 11 crew tried to change that.

"Where we netted out was that the 'It Factor' comes down to two things: When you walk into a room, do people feel your presence and do you make them better?" Roth said.

Roth and company have advanced to trying to assess and develop in their quarterbacks emotional intelligence, the ability to control their emotions and recognize and empathize with the emotions of others.

Elite 11 has also incorporated cognitive testing,, in which they try to measure how each quarterback's brain is wired for memory, recognition and learning.

Still, there is no test or formula that can reliably identify which quarterbacks have "it."

"There's got to be a little bit of gut feel to it, too," Oklahoma Coach Lincoln Riley said. "Because kids come from different backgrounds. These guys are raised in different parts of the country, in different homes, with different family situations. Different situations at school, different kinds of leadership in their life. And so some of it's evaluating where they're at now and some of it's predicting as best you can where you think they're headed."