Shutting off foreigners to save jobs, Trump says 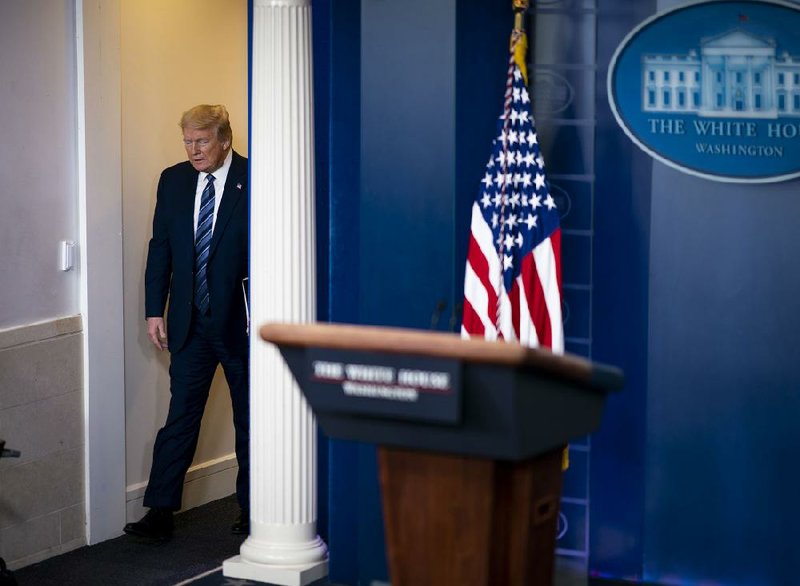 WASHINGTON -- President Donald Trump announced on Tuesday what he described as a "temporary suspension of immigration into the United States." But he said the executive order he plans to sign as soon as today would apply only to those seeking permanent residency and not temporary workers.

Trump said he would be placing a 60-day pause on the issuance of green cards in an effort to limit competition for jobs in a U.S. economy wrecked by the coronavirus. But he said there would be "certain exemptions" included in the order, which aides were still crafting Tuesday.

"I will be issuing a temporary suspension of immigration into the United States," Trump said during a White House briefing Tuesday. "By pausing, we'll help put unemployed Americans first in line for jobs. It would be wrong to be replacing them with new immigrant labor flown in from abroad."

He said economic conditions would determine whether the pause would be extended.

Sen. Tom Cotton, R-Ark., praised Trump's decision and said on Twitter: "22 million Americans have lost their jobs in the last month because of the China virus. Let's help them get back to work before we import more foreigners to compete for their jobs."

An administration official familiar with the plans had said earlier that the order would be focused on preventing people from winning permission to live and work in the U.S. That would include those seeking employment-based green cards and relatives of green-card holders who are not citizens.

Americans who wish to bring immediate family members to the country would still be able to do so, according to the official, who spoke on condition of anonymity before the plan was announced.

About 1 million green cards were granted in fiscal 2019, about half to spouses, children and parents of U.S. citizens.

Trump has raised concerns for years about foreigners competing with American citizens for jobs.

But he denied he was using the virus to make good on a long-standing campaign promise during an election year. "No,I'm not doing that at all," he said.

While major new limits on immigration normally would affect millions of people, much of the immigration system has already ground to a halt because of the pandemic. Almost all visa processing by the State Department has been suspended for weeks. Travel to the U.S. has been restricted from much of the globe.

Criticism of Trump's new announcement was swift, especially his timing during the pandemic. Ali Noorani, president of the National Immigration Forum, noted that thousands of foreign-born health care workers are currently treating people with the coronavirus and working in critical sectors of the economy.

Immigrant-rights groups dispute the claim that immigration is bad for American workers, pointing to research that shows there is little connection between immigration and wages, and stressing the benefits of America's immigrant culture. Charanya Krishnaswami, the advocacy director for the Americas at Amnesty International USA, responded to the president's tweet with one of her own.

"When you're a xenophobe, bans on migration are the only tired, failed, hateful solution you can think of," Krishnaswami wrote. "Suspending immigration won't make the US -- which currently leads among COVID cases worldwide -- safe. Our policies need to be grounded in public health, not bigotry."

But Jessica Vaughn, director of policy studies at the Center for Immigration Studies, which favors lower rates of immigration, said that eliminating millions of work permits and visas would "instantaneously create" new jobs for Americans and other legal workers -- even though most businesses are shuttered because of social-distancing dictates and stay-at-home orders.

In a statement, White House press secretary Kayleigh McEnany described the order as aimed at protecting both the "health and economic well-being of American citizens as we face unprecedented times." She said, "At a time when Americans are looking to get back to work, action is necessary."

Though travel restrictions around the globe have dramatically reduced immigration, Trump could have used his executive authority to restrict it further, including slashing the number of foreign workers allowed to take seasonal jobs in the U.S. Before the outbreak, the administration had planned to increase the number of H-2B visas, but the Department of Homeland Security put that on hold in early April.

Sarah Pierce, a policy analyst at the Migration Policy Institute, said Trump could end the processing of immigrant and nonimmigrant visa applications under the same legal authority he used to impose the travel ban that was upheld by the Supreme Court. But she said the State Department has largely stopped processing visas anyway.

Trump first announced his intentions in a vague tweet Monday night. Across the country, those who could have been affected waited in suspense throughout the day Tuesday.

Chicago immigration attorney Fiona McEntee said she had been inundated with calls, emails and social media messages, including from company executives hoping to expand their business in the U.S., a person applying for a fiance visa and wondering about wedding plans, artists seeking "extraordinary ability" visas and foreign students.

"It has created absolute panic," McEntee said. "These are people's lives. ... It is irresponsible and cruel to put out something like that without any consideration."

[Video not showing up above? Click here to watch » https://www.youtube.com/watch?v=OlHf1L1-z9o]

There is no precedent for such a move by a U.S. leader, said Andrew Selee, president of the nonpartisan Migration Policy Institute in Washington.

"I can't think of any parallels to this in any other democratic country in the modern era," he said. "We're essentially telling citizens, companies, innovators, educational institutions to put their plans on hold. Can a president do that? I guess they're finding whether they have legal authority."

Last month, the administration effectively ended asylum, relying on a rarely used 1944 law aimed at preventing the spread of communicable disease. U.S. borders with Mexico and Canada have been closed to tourism and recreational travel. Commercial traffic and a wide range of "essential" workers are still allowed to travel freely.

Trump and his advisers have argued inside the White House that doing more to bar people from other countries from coming into the United States, either for short-term visits or to live and work in the country for longer periods, could help limit the number of infected people who arrive from potential coronavirus hot spots around the world. And they argue that it could relieve pressure on the American health care system.

But Trump's primary focus appears to be on protecting American workers as the virus ravages what had been a rapidly growing job market.

Since taking office, Trump has carried out some consequential immigration policies. In January, the president expanded his travel restrictions to 13 countries, virtually blocking immigration from Africa's most populous nation, Nigeria.

Stephen Miller, the architect of the president's immigration agenda, has pushed repeatedly for regulations and executive actions that would limit the amount of immigration that is allowed each year, arguing that immigrants are a drain on American society, drive down wages and take jobs from native-born Americans.