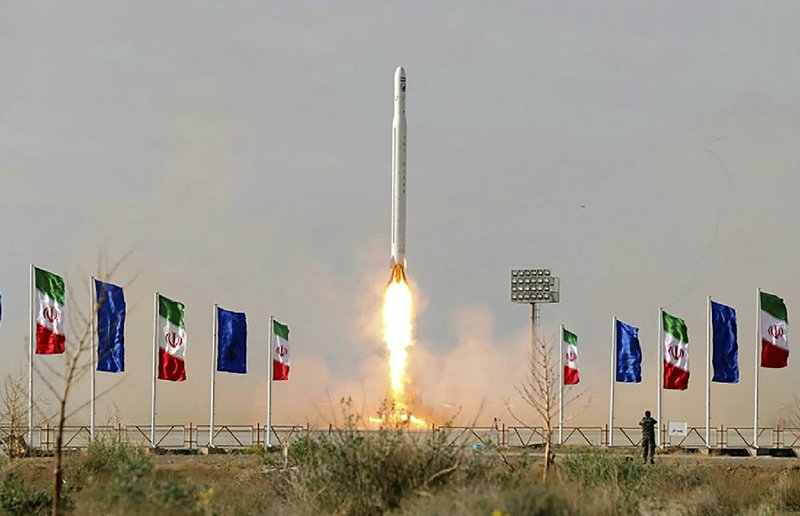 A rocket blasts off from a mobile launcher at a site believed to be in Iran’s Semnan province in this photo released Wednesday. Iran’s Revolutionary Guard said the rocket carried the Islamic Republic’s military satellite into orbit. (AP/Sepahnews)

WASHINGTON -- President Donald Trump said Wednesday that he has ordered the Navy to "shoot down and destroy" any Iranian gunboats that harass U.S. ships, a directive that comes a week after the Navy reported that Iranian boats made "dangerous and harassing approaches" to American vessels in the Persian Gulf.

Meanwhile, Iran's Revolutionary Guard said that it had put the Islamic Republic's first military satellite into orbit, unveiling what experts described as a secret space program.

Trump did not cite a specific Iranian provocation in his tweet or provide details.

The White House declined to say Wednesday whether the president has issued a written order or to provide a copy. Pentagon officials did not directly answer when asked by reporters Wednesday whether the military has received an order changing long-standing policies or procedures regarding naval engagements.

[Video not showing up above? Click here to watch » https://www.youtube.com/watch?v=hYtZ-9ST-ag]

"So, the president issued an important warning to the Iranians. What he was emphasizing is all of our ships retain the right of self-defense, and people need to be very careful in their interactions to understand the inherent right of self-defense," Deputy Defense Secretary David Norquist said when asked about Trump's tweet.

Air Force Gen. John Hyten, vice chairman of the Joint Chiefs of Staff, said he thinks the Iranians understand what Trump meant. He said the Navy also understands that if an Iranian on a gunboat "has a gun and you point it at me," that can be interpreted as an expression of hostile intent that may be answered with U.S. force.

In the tweet, Trump said: "I have instructed the United States Navy to shoot down and destroy any and all Iranian gunboats if they harass our ships at sea."

Asked whether the tweet means a repeat of last week's incident in the Persian Gulf would require a lethal U.S. response, Hyten said, "I would have to be the captain of the ship in order to make that determination." Hyten said the nature of the response "depends on the situation and what the captain sees."

Last Wednesday, the U.S. Navy said Revolutionary Guard vessels repeatedly crossed the bows and sterns of several American ships at close range and high speed in the northern Gulf. The American vessels included the USS Paul Hamilton, a Navy destroyer and the USS Lewis B. Puller, a ship that serves as an afloat landing base. The ships were operating with Army Apache attack helicopters in international waters, the statement said.

"You can't let a boat, a fast boat, get into a position where they can threaten your ship. And I think that every captain at sea understands what that is right now, and we have very specific guidance on how we can use lethal force," Hyten said during a Pentagon news briefing.

"I go back to -- what the president says sends a great message to Iran. That's perfect. We know how to translate that into our rules of engagement. We don't talk about rules of engagement in public, but they're based on the inherent right of self to defense, they're based on hostile intent and hostile act. That's all we need in order to take the right action," Hyten said.

In a subsequent tweet, Trump suggested that his administration would adopt a tougher posture toward such incidents than had the Obama administration.

Gen. Abolfazl Shekarchi, a spokesman for Iran's armed forces, accused Trump of "bullying" and said the American president should focus on taking care of U.S service members infected with the coronavirus.

"Today, Americans must do their best to save those troops who are infected with coronavirus instead of bullying others," Shekarchi said, according to Iran's semiofficial news agency ISNA.

Secretary of State Mike Pompeo also was asked what the tweet meant.

"What he said this morning, and what I know he's told all of us in leadership inside the government, is 'take whatever action is necessary to make sure that you can defend and keep our people safe,'" Pompeo said.

A senior Navy spokesman, Rear Adm. Charles Brown, said Wednesday that the Navy will continue to follow international laws of armed conflict. Those include guidelines that dictate that a ship's crew should not exceed the amount of force necessary to repel an attack.

U.S. Navy ships and Iranian Guard naval vessels occasionally have encounters in the Persian Gulf that the U.S. calls unprofessional, but they rarely escalate or include an exchange of gunfire. Tehran views the heavy presence of American forces there as a security threat.

During last Wednesday's incident in the Gulf, the U.S. Navy said the 11 Iranian gunboats' "dangerous and provocative actions increased the risk of miscalculation and collision ... and were not in accordance with the obligation under international law to act with due regard for the safety of other vessels in the area."

According to the Navy, the Americans issued multiple warnings on bridge-to-bridge radio, fired five short blasts from the ships' horns and long-range acoustic noise-maker devices, but received no immediate response, the statement said. After about an hour, the Iranian vessels responded to the bridge-to-bridge radio queries, then maneuvered away.

American commanders are trained to make nuanced and careful judgment calls about how to respond to incidents at sea. Rather than immediately resort to the use of deadly force, commanders are expected to act based on the specific circumstances, including the threat to their own crews and adherence to the international laws of warfare. Generally, as in the case of last Wednesday's incident, warships will issue warnings by a variety of means, including bridge-to-bridge radio, before taking more direct action.

Also on Wednesday, Iran's Revolutionary Guard's launch of a military satellite raised concerns among experts about whether the technology could be used to help Iran develop intercontinental ballistic missiles. Iran currently has short- and intermediate-range missiles.

Hyten told reporters that the lranian payload "went a very long way." He said it was too early to say whether the launch had successfully placed a satellite in orbit. "This is just another example of Iranian malign behavior," Hyten said.

Using a mobile launcher at a new site, the Guard said it put the "Noor," or "Light," satellite into a low orbit circling the Earth. While the U.S., Israel and other countries declined to immediately confirm that the satellite reached orbit, their criticism suggested they believed the launch happened.

Iranian state TV late Wednesday showed footage of what it said was the satellite and said it had orbited the Earth within 90 minutes. It said the satellite's signals were being received.

The appearance of the mobile launcher struck U.S. and Israeli officials as a major advance. Previously Iran has launched its satellites from fixed sites, which are easy to strike before a launch. But the photos and video of this launch showed a mobile launcher similar to what the North Koreans have increasingly used. The system reduces warning time, and thus makes it harder to preempt a launch.

Pompeo told reporters at the State Department on Wednesday that the launch amounts to a lie that Iran's assertion that its space program is for commercial purposes.

"I think every nation has an obligation to go to the United Nations and evaluate whether this missile launch was consistent with that Security Council resolution," he said, referring to the resolution that endorsed the 2015 nuclear agreement and called on Iran not to test missiles capable of carrying a nuclear warhead.

"I don't think it remotely is," he added. "They've now had a military organization that the United States has designated as terrorist attempt to launch a satellite."

"I think today's launch proves what we've been saying all along here in the United States," Pompeo said. "I think Iran needs to be held accountable for what it's done."

Wednesday marked the 41st anniversary of the founding of the Guard by Iran's late leader, Ayatollah Ruhollah Khomeini. An image of the rocket that carried the satellite showed that it bore a Quranic verse typically recited when going on a journey, as well as a drawing of the Earth with the word Allah in Farsi wrapped around it. It remained unclear what the satellite it carried does.

"Today, the world's powerful armies do not have a comprehensive defense plan without being in space, and achieving this superior technology that takes us into space and expands the realm of our abilities is a strategic achievement," said Gen. Hossein Salami, the head of the Guard. 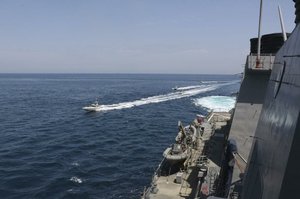 Iranian Revolutionary Guard vessels speed past U.S. military ships in the Persian Gulf near Kuwait on April 15 in what Navy officials called “dangerous and harassing” maneuvers. In the tweet Wednesday, Trump said: “I have instructed the United States Navy to shoot down and destroy any and all Iranian gunboats if they harass our ships at sea.” (AP/U.S. Navy)