Jockey gives up fighting for races 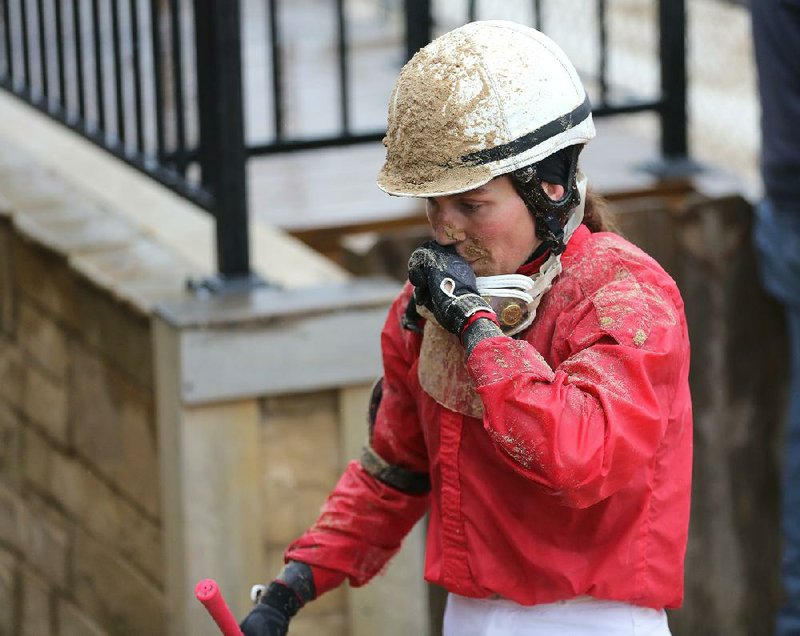 HOT SPRINGS -- For the time being, Chel-c Bailey plans to stick with the horse racing game.

Bailey, an apprentice jockey in her first season at Oaklawn, calls Enumclaw, Wash., home, but she was a state champion high school wrestler for the Jenkins High Cougars in Chewelah, Wash. She graduated from Jenkins in 2010 and later wrestled for Yakima Valley (Wash.) Community College, where she won a junior-college national championship.

Amateur wrestlers who wish to continue their athletic careers frequently turn to mixed martial arts, Bailey said, and she initially chose that path before she followed her husband David Kembrey to the racetrack. Kembrey is an exercise rider for Hall of Fame trainer Jerry Hollendorfer.

Bailey said her days of wrestling on an all-boys team in high school served her well in mixed martial arts, and it still does in male-dominated horse racing.

"There is a way higher ratio of men to women," Bailey said. "I didn't have the opportunity to grow up in the sport, but here, everyone talks about how, back in the day, women weren't even allowed on the backside.

"I know there are still some trainers who don't believe women should be back there. Sexism is very real, and I dealt with it in fighting and when I wrestled in high school, but I don't try to play the girl card. I just want to be equal."

Bailey's athleticism was evident despite her loss by decision to Tatiana Suarez on the reality show The Ultimate Fighter in 2016. Suarez is currently ranked No. 3 in the Ultimate Fighting Championship's women's strawweight division.

Bailey said fitness, strength and weight maintenance are as essential for a jockey as they are for fighters.

"You have to make weight for fighting just like you have to to be a jockey," she said. "I'm not saying that's my favorite thing, because I love food, but it shows how disciplined a person you can be. It also helps to be a person who can be coached, and without any sort of background, I've been like a sponge in the sport, just by watching and listening and talking with jockeys and riders and trainers."

Bailey, 5-0, 108 pounds, began her official riding career at Canterbury Park in Shakopee, Minn., where she rode five entrants from Sept. 6-Sept. 14 of last year. Her best finish was third on a maiden named Slightly Crafty in a field of 11. She rode three more at Turfway Park in Florence, Ky., in December, but she remained winless entering this season at Oaklawn.

She said she bought a large bottle of champagne to celebrate her first win, which came when she rode Burtnjoe to victory in a 6-furlong field of eight Arkansas-bred claimers on Feb. 28.

"Usually, I'm riding all the long shots," Bailey said. "Usually, I always see the horses ahead of me, so I'm battling to just try and get anywhere between third to sixth and not get last place. This time, it's, 'Oh my gosh. I'm on the lead.' I'm actually battling this out."

Burtnjoe turned into the stretch with a 2-length lead and held on to win by a nose.

"She's always wanting to see where she can improve and what she did wrong," Kembrey said. "I'm happy for her."

Bailey and Kelsi Harr are the only two full-time women riders at Oaklawn this season. Bailey said they encourage each other often.

She said horse racing remains her career choice, but she also said she would consider at least a brief return to mixed martial arts.

"I can't say that I won't," Bailey said, "It was something I have always wanted to do. I just absolutely love it. That's one thing between horse racing and fighting; I absolutely love both of them.

"The worst part about it is that I can't do both of them. I have to do one or the other." 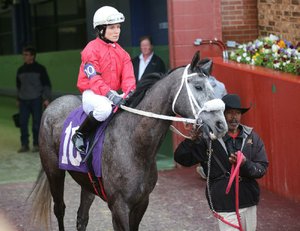 Jockey Chel-c Bailey, shown aboard Wild and Golden on April 4 at Oaklawn, has a record of 3-3-4 in 65 starts with six racing days left. She has earned $84,586. (Arkansas Democrat-Gazette/Thomas Metthe)