State lays out plans on uptick of testing 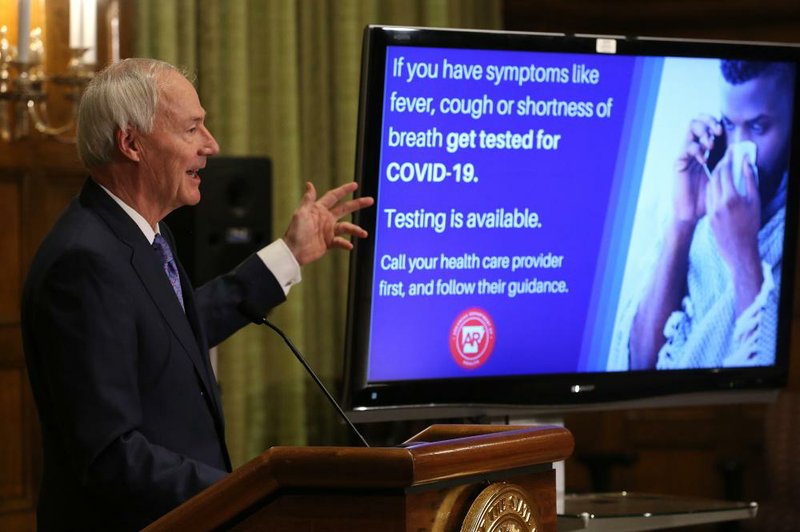 Gov. Asa Hutchinson, during his daily briefing Thursday at the state Capitol, shows an ad for a new campaign aimed at getting more people tested for the coronavirus. (Arkansas Democrat-Gazette/Thomas Metthe)

Arkansas Gov. Asa Hutchinson on Thursday unveiled a strategy for increasing the amount of coronavirus testing in the state, including a campaign aimed at creating a "surge" of tests today and Saturday.

He said he wants to increase the rate of testing from an average of about 1,000 tests a day to 1,500 a day on those days.

"There's an inventory available out there for testing right now all across the state of Arkansas," the Republican governor said. "And so Arkansans, we're asking you for the next two days, if you've thought about it before, if you think you've got symptoms or you've got flu-like symptoms, or you're in an at-risk category and you've been traveling, go in there. Let's get tested."

Following the recommendations of an advisory group of medical professionals formed this week, the testing strategy also includes guidance to health care providers that they should test anyone who has possible exposure to the virus -- whether or not the patient has symptoms.

Those with possible exposure include people who have had contact with someone known to have the virus or who were recently in an area with a large outbreak.

Previously, the state Department of Health had recommended that such people be quarantined at home for 14 days and tested only if they develop symptoms.

On Thursday, the state's official count of cases increased by 207, to 2,599, while the death toll from the virus increased by one, to 45.

The statewide case total still did not include all of the infections associated with an outbreak at the Cummins Unit in Lincoln County, where the number of infections among inmates increased Thursday by six, to 687, and among the staff by 21, to 35.

[Video not showing up above? Click here to watch » https://www.youtube.com/watch?v=fX2GTbOewT0]

According to the Health Department, cases from the prison outbreak are being added to the state's total as information from laboratory reports are entered into a state database.

Inmates accounted for 122 of the 189 cases that were added to the statewide count from Wednesday to Thursday afternoon, Health Secretary Nate Smith said.

Smith said increased testing throughout the state will allow the Health Department to "identify those who are infected, interrupt or stop the spread of covid-19, and ultimately save lives."

"I know that a week or two ago, many people expressed frustration about our lack of capacity," Smith said. "Now, if you consider our commercial sector, the [University of Arkansas for Medical Sciences] lab, the Department of Health lab and some other hospitals that are doing testing as well, we're not fully utilizing that capacity, and we need to know. If people have symptoms of covid-19, we need to have that answer, both for their benefit and also for us to know as a state."

In the past, shortages of laboratory capacity, masks and other protective medical gear and material needed to perform tests led the Health Department to issue restrictive guidelines on whom providers should test.

Arkansas' large purchases of protective equipment from overseas suppliers and shipments from hospitals' own vendors have alleviated those concerns, state officials said Thursday.

"In my discussions with the hospitals, they're in good shape right now," Hutchinson said. "It's something they always worry about for the future and that's why you don't want to completely deplete their inventory of [personal protective equipment] and swabs."

But he said most hospitals "can do this surge comfortably and still have that inventory that's needed."

In support of the effort, Baptist Health, which already had several drive-thru testing sites around the state, announced that it will add testing sites in Little Rock, North Little Rock and Fort Smith that will be open from 8 a.m. to 5 p.m. today and Saturday.

Any Arkansan who wants a test should call their health care provider as an initial step, Hutchinson said.

The test should be available at no charge to the person, he said.

Laws passed by Congress in response to the pandemic require health insurers to cover the test at no cost to the person and provide reimbursement to providers who perform the test on people who don't have insurance.

"If they want a test, they get a test, period," Hutchinson said.

The campaign slogan: "If you think you have symptoms, don't wait -- get tested."

The Health Department will advertise the campaign through social media and its website, spokesman Meg Mirivel said.

Under the new strategy, the Health Department will conduct tests itself when tracking down people who have had contact with someone known to be infected, even if those people don't yet have symptoms.

It will also recommend screening people in certain "high-risk settings," such as hospitals and nursing homes.

That started, Hutchinson said, with the directive issued Wednesday that requires hospitals and clinics to test patients for covid-19, the disease caused by the coronavirus, before performing elective surgical procedures when those procedures are allowed to resume Monday.

Additional settings where such testing will be recommended or required will be announced "as resources are available," he said.

He said the Health Department and UAMS will also work on a strategy for using blood antibody tests, which indicate whether someone has ever been infected with the virus, to study the spread of the disease in the state.

Even excluding the inmate cases, Hutchinson acknowledged that the number of positive test results had been trending upward for the past couple of days, potentially putting the state off track for meeting criteria set out in White House guidelines for easing restrictions on businesses, something Hutchinson has said he wants to start on May 4.

The guidelines call for states to have a downward trajectory of positive tests or percentage of results that are positive for a two-week period before beginning to lift restrictions.

"May 4 is closer than 14 days, and we have had a couple days in which our cases have gone up," he said.

But he said the trend in cases is just one criterion listed in the guidelines and that White House officials have emphasized that states can "determine their own criteria and what makes sense in their state."

"We shouldn't look at this as the end-all in terms of that's the only criteria we look at," he said.

He said he'll be considering "multiple factors" and consulting with public health officials as he decides what restrictions will be relaxed.

Limitations on court services -- which had been set to be lifted on May 1 -- were extended until at least May 15 by order of the Arkansas Supreme Court on Thursday. The high court's per curiam order also directed courts to hold any necessary hearings remotely over video or teleconference, unless doing so is "possible or feasible."

In a news release Thursday, the state Democratic Party said Arkansas should meet "minimum thresholds for testing" before decisions on lifting restrictions are made.

The release noted that Arkansas ranked in the bottom half of the nation in the number of tests, on the basis of population, that have been conducted, "even falling behind Mississippi."

According to data from the Covid Tracking Project, which collects information from state health departments, Arkansas ranked 34th in that measure, with about 10.5 tests conducted per 1,000 residents.

But the data also showed that, after previously ranking behind all its surrounding states except Texas, Arkansas had pulled ahead of Missouri, which had 9.7 tests per 1,000 residents.

"We simply aren't where we need to be, in terms of testing availability, to be making pronouncements about when the public health threat has passed," Democratic Party Chairman Michael John Gray said in the news release.

"I'm concerned the governor and others are being pressured to send people back to work too early, to avoid having to actually provide support and a sense of security for Arkansas families through the duration of this crisis."

The 44th and 45th deaths added to the state's total were both Washington County residents, the first people in that county to die from the virus.

Washington County Coroner Roger Morris said a 49-year-old man died Tuesday and a 59-year-old woman died Wednesday. Both were from the Springdale area, he said.

Information from coroner's reports and other sources also showed that two of the state's total deaths were residents of The Waters of White Hall nursing home, where infections have been confirmed among 21 residents and 19 staff members.

Norma Jean Smith, 87, died two weeks ago at Jefferson Regional Medical Center from cardio-respiratory arrest with covid-19 as a contributing factor, according to a Jefferson County coroner's office report.

Smith lived for roughly two years at The Waters of White Hall before she died, according to a family member, who asked not to be named.

Gerald "Bruce" Lawson, 85, died at the nursing home Monday of respiratory distress caused by covid-19, according to a coroner's report.

She tested positive for covid-19 on the same day, and her death certificate shows that she died April 11, the family member said.

Lawson moved into the nursing home last fall to receive wound-care treatment after a surgery, his wife, Rachel Lawson, said.

She said her husband, who had Parkinson's disease, later moved to the long-term-care wing of the facility.

She said she was trying to line up a 24-hour, in-home care provider before taking home her husband of 59 years when the global pandemic reached Arkansas.

He was diagnosed with covid-19 on April 8, she said.

Her husband founded Lawson Welding Supply in 1983. After retirement, he joined the staff of Family Church of White Hall, where he implemented a 12-step program called Celebrate Recovery, and worked as a counselor, among other tasks.

"My husband was a wonderful man who touched a lot of lives," Rachel Lawson said.

The Health Department also said Thursday that a fifth resident of Briarwood Nursing and Rehabilitation Center in Little Rock had died.

That, and the deaths at The Waters of White Hall, raised the state's number of publicly reported nursing home deaths linked to the virus to 11.

At Briarwood, the nursing home with the state's largest outbreak, a Health Department report showed the number of residents and staff members who have tested positive increasing by one Thursday, making a total of 48 residents and 17 staff members.

The report also showed that a worker had tested positive for the first time at The Green House Cottages of Poplar Grove in Little Rock, and at Summit Health and Rehab Center in Taylor, in Columbia County.

That raised the number of nursing homes where at least one resident or worker has tested positive to 33.

The number of known infections increased by four, to 182, among residents and by three, to 99, among staff members.

The number of hospitalized covid-19 patients statewide increased by four, to 101, on Thursday afternoon.

Twenty-three of the patients were on ventilators, an increase of one from a day earlier.

As more cases were added to the Health Department's database, the number listed on a state website for Lincoln County increased by 118, to 630, from Wednesday evening to Thursday evening.

In Pulaski County, the number of cases increased by 13, to 427. Among other counties with at least 100 cases, the number increased by nine, to 156, in Crittenden County, and by six, to 142, in Jefferson County. The number remained unchanged at 109 in Garland County. 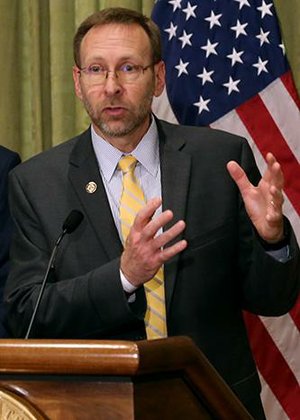 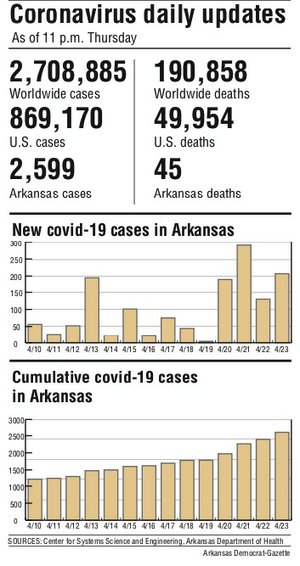