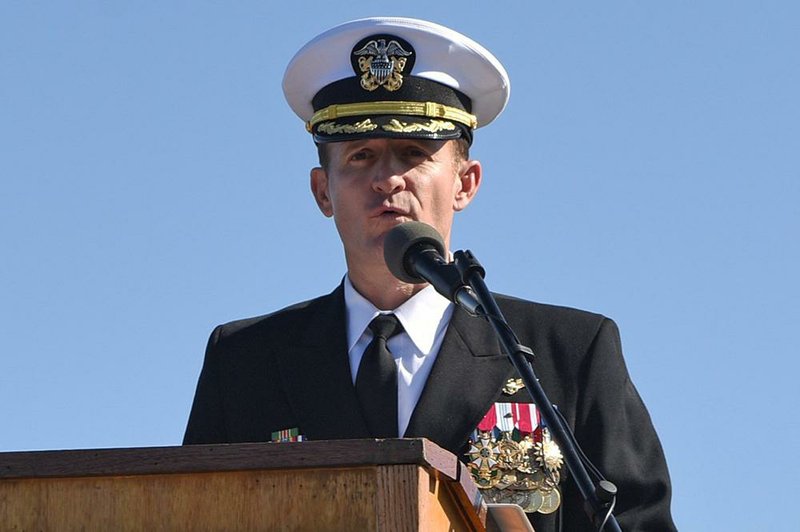 Capt. Brett Crozier addresses the crew on the flight deck of the aircraft carrier Theodore Roosevelt in November during a changeof- command ceremony in San Diego. (The New York Times/U.S. Navy)

But Defense Secretary Mark Esper, who was briefed on the recommendation, has asked for more time to consider whether to sign off on reinstating the captain of the nuclear-powered carrier.

Esper received the recommendation from the chief of Naval Operations, Adm. Michael Gilday, and the acting Navy secretary, James McPherson. Defense Department officials said earlier that they had expected to announce the results of the Navy's investigation into the matter Friday afternoon.

A reinstatement of Crozier would be a turnaround in a story that has seized the attention of the Navy, the overall military and even a nation grappling with the coronavirus.

After a letter he wrote pleading for help for the virus outbreak on his ship was released publicly, he was fired by acting Navy Secretary Thomas Modly. A video of hundreds of cheering sailors yelling "Captain Crozier!" as he departed the aircraft carrier, black backpack on his shoulder, was viewed widely online.

Now, after a review of the episodes of the past month, it is Modly who is out of his job. Meanwhile, Gilday and Modly's successor, McPherson, pushed for the reinstatement of Crozier during a meeting Friday with Esper.

Gilday and Gen. Mark Milley, chairman of the Joint Chiefs of Staff, had both advised Modly not to remove Crozier before an investigation into events aboard the Roosevelt was complete. But Modly feared that President Donald Trump wanted Crozier fired, according to his acquaintances, and dismissed the captain.

But the president's position softened as videos of crew members extolling their captain made their way around social media. Still, it was unclear exactly where the president now stands on the reinstatement of Crozier.

Gilday and McPherson reached an agreement late last week that the events leading to Crozier's letter pleading for help showed that he should not have been removed, officials said. They briefed Milley on their findings Tuesday.

It was unclear late Friday why the defense secretary had delayed the process. His spokesman, Jonathan Hoffman, had said earlier in the day that Esper was likely to back the Navy's conclusion.

Crozier was fired April 2 after sending an email to several naval officers warning about the growing virus outbreak and asking for permission to isolate the bulk of his crew members on shore. It was a move that would take the carrier out of duty in an effort to save lives.

"We are not at war. Sailors do not need to die. If we do not act now, we are failing to properly take care of our most trusted asset, our sailors," Crozier said in the memo.

Modly complained that Crozier "demonstrated extremely poor judgment" in the middle of a crisis, saying the captain copied too many people on the memo, which quickly went public. Modly also asserted that Crozier had improperly allowed sensitive information about the ship's condition to become public.

A few days later, Modly flew out to the ship and delivered a profanity-laced condemnation of Crozier over the loudspeaker to the crew. Crozier, he said, may have been "too naive or too stupid" to be commanding officer of the ship.

Just hours after his comments were widely reported, Modly apologized. But the next day, in the face of widespread criticism, he resigned. Esper initially defended Modly's firing of Crozier, saying he made a "very tough decision." But other military leaders, including Gilday, internally opposed the firing, saying an investigation should be conducted first.

Trump initially called Crozier's memo "terrible." But a short time later he softened his take, saying he didn't want to destroy someone who may just have "had a bad day."

Crozier, who friends say is feeling better after he contracted the coronavirus, is in isolation in the distinguished-visitors quarters on a Navy base in Guam. He is awaiting another test to confirm that he no longer has the virus, his friend said.

Rep. Adam Smith, chairman of the House Armed Services Committee, issued a statement Friday calling for the captain to be reinstated. "While Captain Crozier's actions at the outset of the health crisis aboard the T.R. were drastic and imperfect, it is clear he only took such steps to protect his crew," he said. "Captain Crozier should be reinstated to his command immediately."

Former Navy leaders echoed that sentiment. "The Navy leadership made the right call, and Secretary Esper needs to support it," said Sean O'Keefe, who was Navy secretary under President George H.W. Bush. "Capt. Crozier made a decision to place his crew above himself, and that's a noble precedent."

Earlier in the day, Hoffman had suggested that Esper was going into the matter with an open mind, and said "he is generally inclined to support Navy leadership in their decision." In a written statement released after the news of Gilday's recommendation broke, Hoffman said Esper got a "verbal update" from Gilday and wants to read the written report and then meet with the Navy to "discuss next steps."

While other details of Gilday's recommendations were not clear, they are expected to address the broader communications and leadership issues on the ship and within the fleet, including how the ship dealt with the growing outbreak, and how that information traveled through the chain of command.

There have been ongoing questions about whether Navy leaders took too long to acknowledge the ship's problems and if other commanders share blame for not being responsive to Crozier's concerns.

One senior defense official said the investigation covered a complex timeline of communications that spanned multiple time zones and military commands. The official said Esper wants to make sure the report is thorough and stands up to scrutiny.

On April 2, when Crozier walked off the gangway of the Roosevelt in Guam, where the ship is docked, some 114 Roosevelt sailors had tested positive for the coronavirus. Now, a little over three weeks later, that number stands at 840, or 17% of a crew of just under 5,000.

On Thursday, the Navy said that it had completed testing on all 4,938 crew members. Of the total cases, 88 sailors have recovered, and 4,234 have moved ashore, the Navy said. Four sailors are in the hospital with the disease.

The "core crew," those left behind on the Roosevelt to clean and prepare the ship for those on Guam, is set to be swapped out by the end of the month. The Roosevelt is then expected to undertake sea trials, allowing the fighter-jet wing aboard to requalify for aircraft carrier landings at sea before continuing on its deployment.

But that plan has run into its own set of complications, as some of those crew members, housed in hotels and believed to have not contracted the virus, have tested positive in recent days. A lack of space for these patients has prompted some of the crew to be moved into a warehouse on the naval base in what health care providers have deemed the "sailor shuffle."

Information for this article was contributed by Helene Cooper, Eric Schmitt and Thomas Gibbons-Neff of The New York Times; and by Lolita C. Baldor and Robert Burns of The Associated Press.