Garden victories: Amid coronavirus pandemic, interest in growing your own food surges 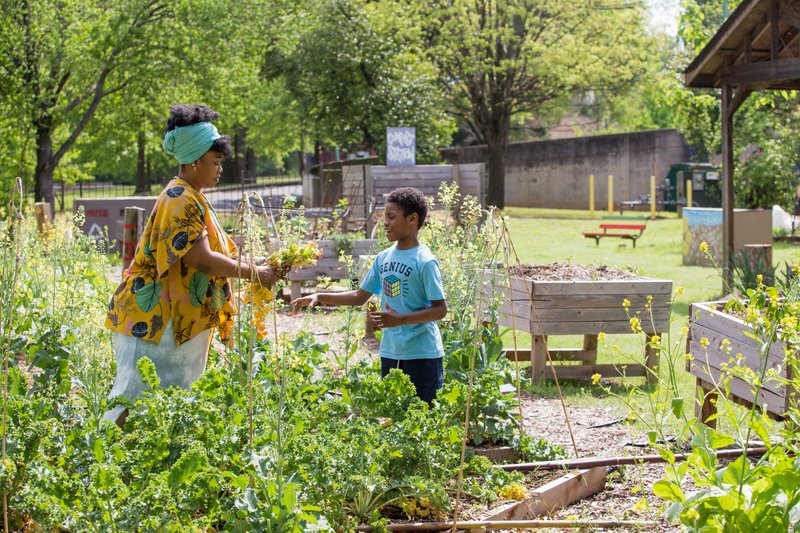 Amina Robinson, who works in customer service for Delta, tends the Habesha community garden pruning kale in the Mechanicsville neighborhood with help from her oldest son, Khaiye Robinson, 11, on Thursday, April 9, 2020. Amina took a training class at the garden last year. "It really is coming into good use," she said. "I need to get out here in the earth." (Jenni Girtman for Atlanta Journal Constitution)

ATLANTA — Amina Robinson works in customer service for an airline, and while she is grateful to still be employed, the past two months have been particularly stressful.

Most days she deals with people who need to fly, but are afraid to or who want to cancel a planned trip because of the coronavirus crisis. She does her best to answer their questions and make changes for them. She tries to keep a calm, friendly tone in the face of their fears. It is not easy. At least once, she has listened as a potential passenger wept because the person was petrified about boarding a plane, Robinson said.

This is why, on her days off, Robinson heads either to a friend's backyard where she shares a garden or to a community garden in Atlanta's Mechanicsville neighborhood where she volunteers.

"You feel their fear and stress, and you pick up on that," Robinson said of the people she listens to each day. "So, it's imperative for me to get out and get into that soil because I have to deposit it somewhere. [Gardening] allows me to reconnect with something that's stable and solid."

Her father and grandmother gardened, and last year Robinson followed in their footsteps and took her hobby more seriously. But now, Robinson isn't just looking to relieve stress as she tends to kale and young bunches of lettuce.

"The fact that I have a garden, I feel more secure in the knowledge that if I need some food, I'll have it," Robinson said.

As the pandemic has escalated from hot spot to hot spot, so has an interest in gardening, say seed and plant companies, nurseries and a leading garden research association. Plant distributors and growers, large and small, are describing the increase in demand for plants and advice on gardening from the public as "staggering" or "overwhelming." At least one major seed distributor said it has seen a nearly 75% increase in sales since the virus was declared a pandemic.

Driving the spike are people under stay-at-home orders looking for something to do safely outside. But fears over the stability of the national food supply chain are also a major factor, observers say, as some grocery stores have struggled to keep bins and shelves replenished with certain foods while panicked shoppers continue to hoard.

"There is an undercurrent of food security in this," said Dave Whitinger, executive director of the National Gardening Association, a research and advocacy group. "If the supply chain does break down, but it probably won't, you'll still be able to grow something to eat. And if you can grow food in your yard, you can still eat and remain safe." 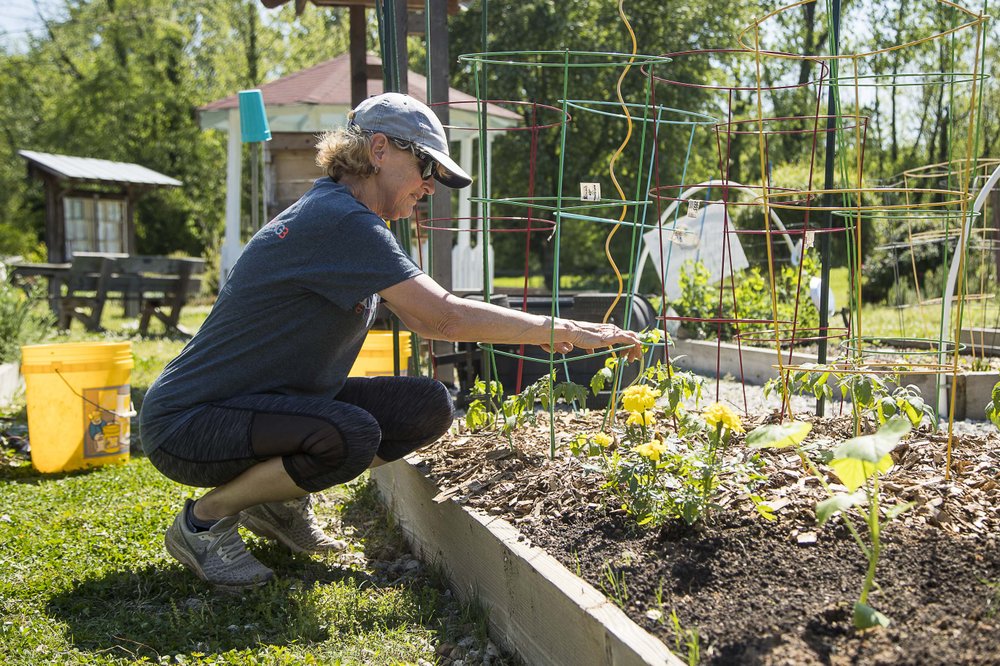 04/09/2020 - Lilburn, Georgia - Gardener Andrea Brannen adjusts a cage around her plants as they start to grow in her plot during a visiting the Lilburn community garden in downtown Lilburn, Thursday, April 9, 2020. Brennen has been gardening at the community garden for a year. (ALYSSA POINTER / ATLANTA JOURNAL-CONSTITUTION)

Whitinger said traffic to the association's website has increased 98% in the last year, from 390,00 unique visitors from April 1-13, 2019, to 774,000 during the same period this year. The organization does an annual trend survey of gardeners and related companies but is thinking of adding a second one this year.

Based on traffic and the questions the website's visitors ask — such as when to plant tomatoes or how long it takes corn to ripen — Whitinger and his staff can tell most of the people seeking help are novice gardeners.

"We've been telling people you don't have to rent a rototiller and tear up your yard to have a garden," he said. "You can grow in containers. You can even dig up a couple of shrubs and plant in your landscape. Chard and peppers can look nice."

Whether they're called Victory Gardens, after the World War I and II backyard plots that swept the nation and kept thousands of families fed during scarce times, or resurgence gardens as some are now calling the burgeoning trend, patches of fruits and vegetables are symbols of fear and hope.

"When this started, people went to stores. There were crazy long lines. You had to wait. When you finally got in, the shelves were empty or picked over and what was left, you could only take two of," said Tenisio Seanima, owner of Nature's Candy Farms in South Fulton, Ga. "That woke people up to the reality that food will not always be around. Now, in whatever way, people are trying to increase that level of security with their own ingenuity."

In the past month, Seanima said, he has expanded his business, largely through Facebook, by offering consulting services to new gardeners, helping experienced gardeners improve their soil to boost yields, and even installing complete gardens for those who have no clue how to do it. 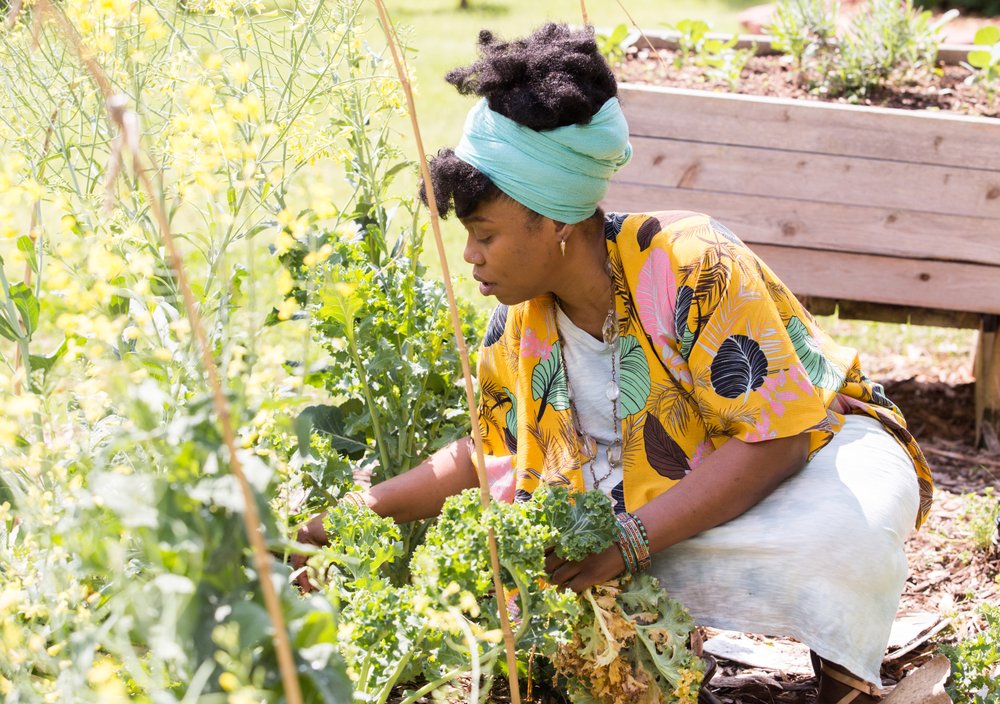 Amina Robinson, who works in customer service for Delta, tends the Habesha community garden pruning kale in the Mechanicsville neighborhood Thursday, April 9, 2020. Amina took a training class at the garden last year. "It really is coming into good use," she said. "I need to get out here in the earth." (Jenni Girtman for Atlanta Journal Constitution)

Charles Greenlea, who has been a manager for the nonprofit Habesha Gardens in southwest Atlanta, is doing similar work. He said he recently helped K. Rashid Nuri, a longtime national leader in the urban gardening movement and founder of Truly Living Well Center for Natural Urban Agriculture in Atlanta, work on Nuri's personal home garden.

Greenlea said a constant conversation among growers, particularly since the outbreak began, is how disconnected most people are from the source of the foods they eat.

"They don't know that food comes from someplace other than the grocery store," Greenlea said.

'YOU CAN'T TRICK THE PLANTS'

Earlier this year, Habesha bought about 1,500 seedlings from southwest Georgia farms then gave them away to home gardeners here in Atlanta, Greenlea said. He was heartened by the interest but cautioned that a lot of new gardeners have plenty of zeal but perhaps not enough tenacity or skill to see a garden successfully through several seasons.

"The average person doesn't understand you can't meet all your nutritional need right out the gate," Greenlea said. "You have to put time into it. You can't trick the plants. There are laws of nature you have to work within."

Rules such as not trying to grow cool-weather plants like tender lettuce and parsley in the heat of summer or planting an apple tree in the backyard in spring and expecting a bumper crop by fall.

Still, seed companies and nurseries are seeing overwhelming traffic. Some nurseries have been deemed essential businesses under state and local ordinances and are either delivering plants to customers' homes or providing curbside pickup at their stores which are closed to foot traffic, such as Pike Nurseries in metro Atlanta. Even Home Depot's garden centers in Midtown and Buckhead were swarming with customers over Easter weekend, although the stores were only allowing a certain number of shoppers in at a time.

Bonnie Plants, the 101-year-old supplier to Home Depot, Lowes, Walmart and 5,000 independent garden retailers, has had to increase production from "coast to coast," said Joan Casanova, spokesperson for Bonnie. "The increase directly in demand is staggering," Casanova said.

The same is true for another major supplier, Burpee, one of the oldest in the nation.

"We're working now almost seven days a week," said George Ball, chairman of Burpee, the 144-year-old Pennsylvania seed and plant company. "We can't keep up with the orders. We're probably running a 50% to 75% increase in sales. I've been here 30 years, and we've never seen this kind of growth. It's stunning."

Burpee supplies big-box stores, but also sells heirloom varieties of okra, tomatoes and other vegetables and flowers directly to consumers through its classic mail-order catalog as well as its website.

In a typical year, a rise in sales picks up in April, which is also National Gardening Month. By this past Good Friday, April 10, however, demand had become so high, the privately held company posted a notice on its website saying it wouldn't accept any new orders until after April 15.

Even for a company whose primary business is ornamental flowers and shrubs, the trend is strong. Bluestone Perennials in Madison, Ohio, ships flowering shrubs, ground covers and bulbs directly to customers nationwide. The 48-year-old company is now struggling to keep up with orders as well, said Bill Boonstra, second-generation owner. 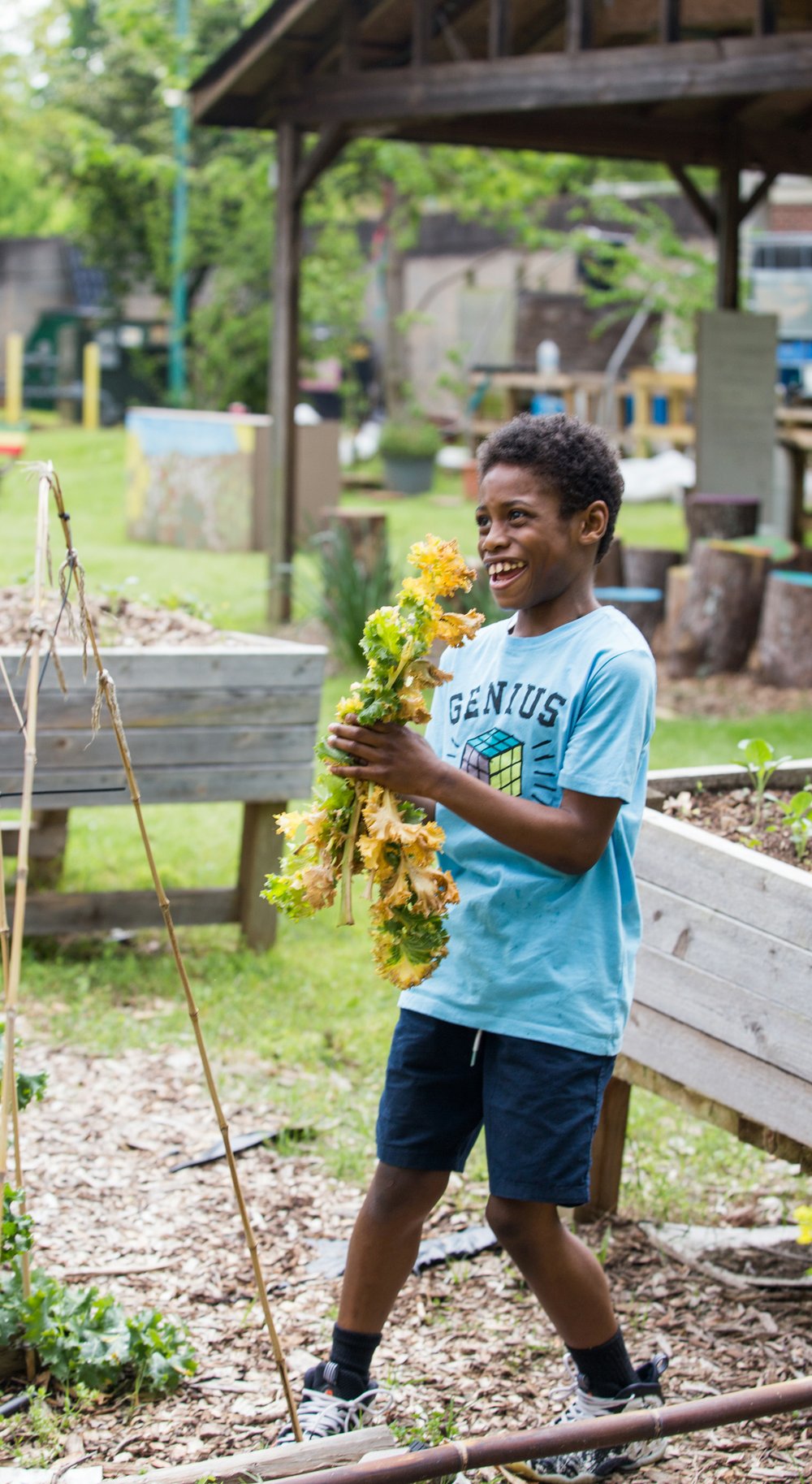 "In my long career I have never seen a demand spike like the one we are experiencing," Boonstra said in an email interview. "We aren't merely setting daily sales records — we're doubling them. It is quite the challenge to keep our employees safe while trying to scale our operation on the fly to handle epic demand. We have had to restrict our phone hours just to free up staff to process all the emails and orders."

Even for Mandy McManus, who sits on the board of the Lilburn Community Garden, the trend is unavoidable. She usually has a plant giveaway at the end of her driveway for neighbors and friends each spring. This year she did hold the sale over Easter weekend but had people pre-order and pay, from $1 to $3 per seedling of coleus, marigolds, petunias, tomatoes, zucchini, thyme, sage and other plants. Before the sale started, McManus was pretty much sold out.

And at the community garden, people who used to rent just one plot are now paying to rent two, she said.

Levi Dickerson of Atlanta started his backyard garden with his wife and two daughters last year as a hobby to teach the girls, now 6 and 12 years old, where their food comes from. Each spring morning one of the girls goes out to harvest parsley to put in eggs for breakfast. But as much as he and his wife try to keep tending to collards and eggplant as a fun family activity, this year feels a little different, he said.

"If the police start blocking the streets and we can't get anywhere, at least we'll have something back here," Dickerson said.