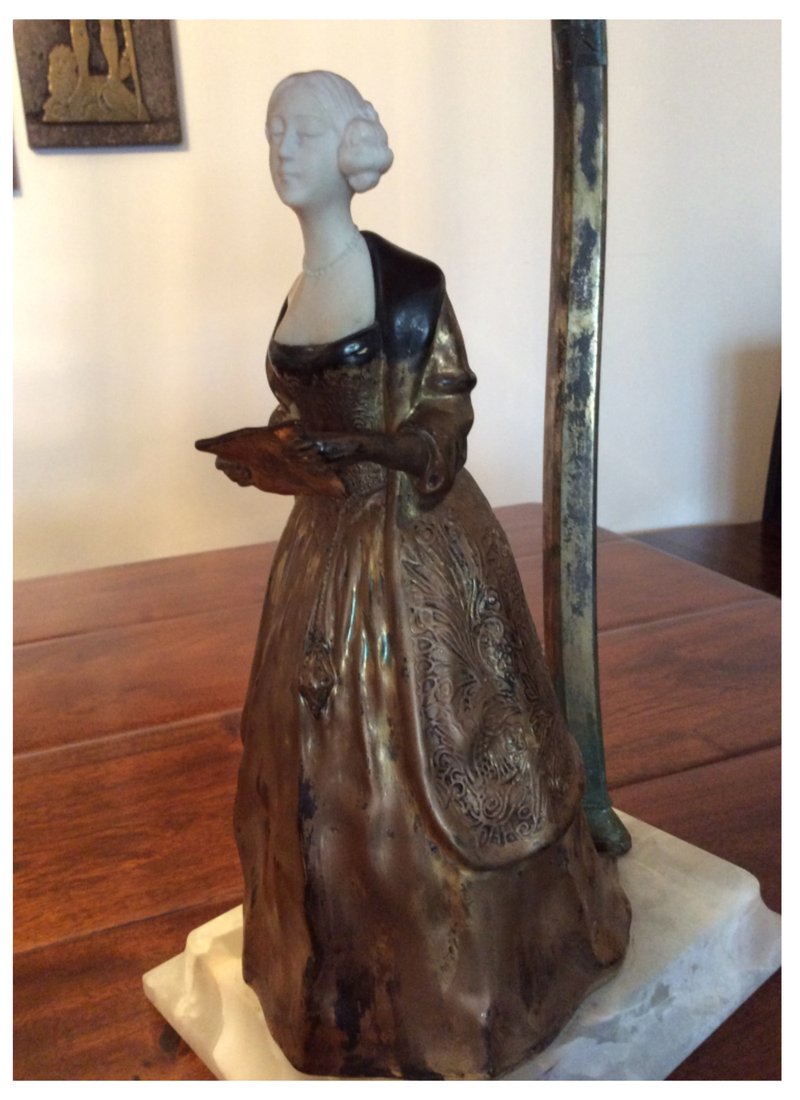 Lovely, but is the bust made from ivory? (Handout/TNS)

DEAR HELAINE AND JOE: My wife's grandmother gave us this lamp, which has "Humplik" on the bottom. Do you have any information on this piece?

DEAR PVF: At first we thought the name "Humplik" was a misread or a misprint. But then we found a clue that led us to Josef Humplik, who was born in Vienna on Aug. 17, 1888.

He studied art in Germany and Austria, but World War I intervened, and he became one of those "daring young men in their flying machines." Unfortunately, Humplik crashed his airplane and was wounded.

It is reported that Humplik was a painter, sculptor, graphic artist and medalist, and after his crash, he became an "official war artist." We are not sure what this means. But after the war, Humplik worked for the Vienna Burgtheater, where works by Mozart and Beethoven had premiered, and after 1923 for the Vienna Porcelain Factory Augarten.

Humplik's sculptural work can be found in bronze, clay and plaster. He was known for his portrait busts — especially those of artists — but he also created public monuments. His statue The Runners received an honorable mention at the 1936 Summer Olympics in Berlin. This brings us to the lamp in today's question, and we have several questions we may not be able to answer satisfactorily.

First, we wonder about the bust, which appears to have been carved from ivory. We did find another example of Humplik's work that had a bronze body and a carved ivory bust. But we must conclude this is a technique Humplik seldom used.

We wonder if the bust might not be made from white porcelain since Humplik worked at Augarten. But that too would be rather unusual.

Our next question centers around whether or not the piece was always configured as a lamp or if a piece of sculpture was converted at a later date.

The sculpture portion, which was influenced by the Vienna Secessionist movement, might be as early as 1910. But a lamp such as this would have been unusual for this pre-World War I date. If the piece is from the 1920s it is a little more possible, but we feel the figure may have existed as a stand-alone sculpture before it became a lamp.

If this is the case, we think the lamp should be valued for insurance purposes in the $1,500-$2,000 range. If the figure is original to the lamp the price would go up by as much as another $500. If, however, the bust is white porcelain and not ivory, the value would drop to around $1,000.

Unfortunately, ivory items cannot be sold in New York, California, New Jersey, Hawaii or Washington state. Interstate commerce is forbidden altogether, but sales within states that do not prohibit it are OK for antique ivory items made prior to 1990 for African elephant ivory pieces and prior to 1975 for objects made from Asian elephant ivory. So the monetary value of this item is questionable.

Helaine Fendelman and Joe Rosson have written a number of books on antiques. Do you have an item you'd like to know more about? Contact them at Joe Rosson, 2504 Seymour Ave., Knoxville, TN 37917, or email them at treasures@knology.net. If you'd like your question to be considered for their column, please include a high-resolution photo of the subject, which must be in focus, with your inquiry.