Maryland to isolate ballots for 24 hours 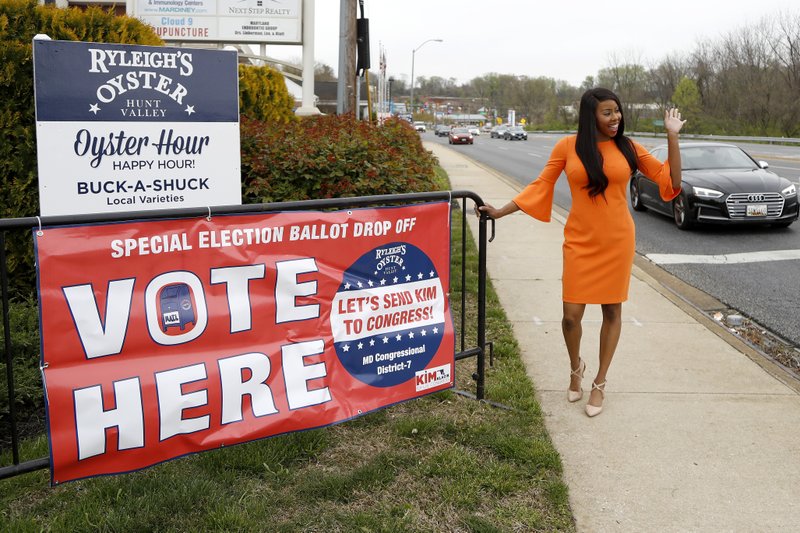 In a photo taken Tuesday, April 21, 2020, Kimberly Klacik, who is the Republican 7th Congressional District candidate, waves for a supporter hoking its horn as she poses for a photograph with The Associated Press in Timonium, Md. Democrat Kweisi Mfume and Klacik won special primaries for the Maryland congressional seat that was held by the late Elijah Cummings. (AP Photo/Julio Cortez)

ANNAPOLIS, Md. -- Ballots cast in person in Maryland's special congressional election between Democrat Kweisi Mfume and Republican Kimberly Klacik will be quarantined for about 24 hours after poll close before being counted -- to give any potential germs a chance to die to help protect election workers.

It's one of the safety measures being taken in an unprecedented Maryland election on Tuesday that will only have three places for in-person voting out of concern for the coronavirus, as election officials are strongly urging eligible voters to mail in their ballots in a single race to decide who will serve the rest of the term of the late U.S. Rep. Elijah Cummings, who died in October.

In hopes of avoiding the lines seen in this month's Wisconsin primary, roughly 484,000 ballots were mailed to registered voters in the district. More than 77,000 already have been turned in. More than half of the vote could be released on the state elections board website shortly after the 8 p.m. poll close on Tuesday.

Virus precautions in this special election have thrust the candidates into unknown campaign territory in the time of a pandemic.

Fundraising has been tough. Candidates haven't been able to reach voters with traditional techniques like door-to-door campaigning or large events. Both candidates say they have been trying to reach voters more through social media.

The majority-black district that includes a large portion of Baltimore as well as parts of its suburbs in Baltimore and Howard counties is heavily Democratic, with more than four Democrats for each Republican.

Klacik, the Republican who has appeared on Fox News and caught President Donald Trump's attention with her social media posts that prompted the president to describe the district as a "disgusting rat and rodent infested mess," said the pandemic has made it difficult to campaign. But the 38-year-old believes she has an edge on the 71-year-old Mfume in the realm of social media.

"I don't think he was really on social media platforms previously, so I felt like we had a little bit of an advantage that way, but, at the same time, he has such a big name," Klacik said. "So, we're basically trying to shout out loud on social media how we can make a positive impact against basically an incumbent, because he had the seat prior to Congressman Cummings."

Mfume, a former NAACP head who held the U.S. House seat for five terms from 1987 to 1996, said he also has been working hard on social media. The man who won his first race for Baltimore City Council in 1978 by three votes said he's not taking anything for granted in the uncertain times.

"It probably concerns me more, because I recognize how elections can be close -- even when you don't think that they are going to be," Mfume said.

Some of the leading issues both candidates have been campaigning on include health care, reducing crime and promoting job creation.

Mfume supports stronger gun-control measures and focusing on root causes of crime. And he has been advocating for greater support for apprenticeships to develop skills for young people to find work.

Klacik has been advocating to help struggling parts of Baltimore through a federal program known as opportunity zones. The program, which is supported by Trump, focuses on increasing private investment in distressed communities with tax incentives for people who invest in real estate projects and operate businesses in designated low-income communities.

Only three in-person polling sites will be open Tuesday for people who can't vote by mail, such as the disabled or the homeless, though other eligible voters can cast ballots in person if they choose.

Voting centers are being prepared to comply with social-distancing guidelines.

"Things will be very spread apart," said Nikki Charlson, the state election board's deputy administrator. "The poll workers will be sanitizing the surfaces."

The winner will run as an incumbent in the state's crowded June 2 primary for a full term. Ballots for the primary will be mailed to Maryland voters in early to mid-May, very soon after Tuesday's election.

"That just seems a little strange and foreign. It's because it really is," Mfume said. "We've never had anything like this in the state before."