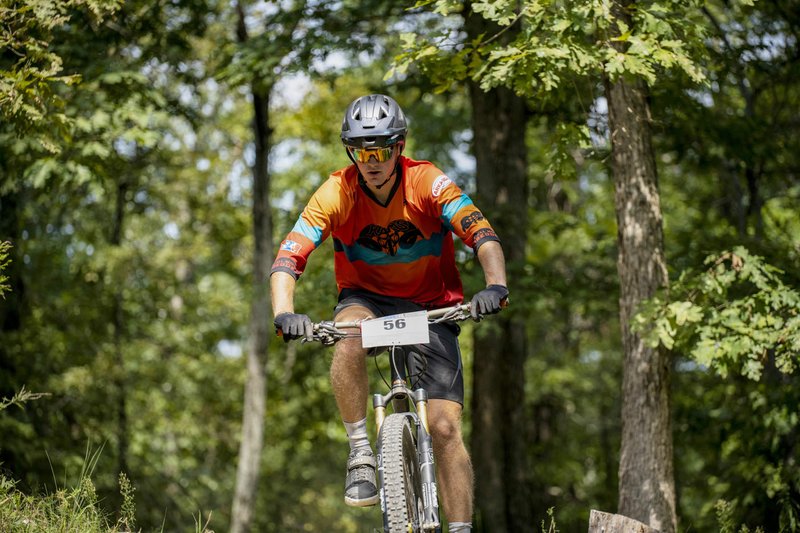 Garrett Chrisman's cell phone went off in the middle of class. The Rogers High School senior tried to be discrete when he answered, but his third-hour teacher was not fooled.

Discretion went out the window when Chrisman realized Arkansas Sen. John Boozman was on the other end with a life-altering opportunity with news Chrisman had been accepted at West Point.

NOTABLE Chrisman has accepted an appointment to West Point Military Academy. … In addition to competing for the Rogers All-Mountain Shredders (RAMS) team in the Arkansas NICA program, he also competes in enduro races. … Chrisman was a member of the Rogers track team, competing in the 400 meters and the 4x400 relay. … Chrisman took up mountain bike racing his freshman year of high school. … He finished sixth overall in the state NICA competition in the varsity boys division.

"I was like, 'yes sir, yes sir' and my teacher was just looking at me," Chrisman said. "It was a work day and she wasn't doing a lecture or anything. She said 'what are you doing?' I said, 'Sorry, I'm on the phone with Senator Boozman. It was pretty funny."

That was in mid-March before the world hit a pause with the start of the covid-19 pandemic. Chrisman had applied to both Army and Navy as well as several public universities. He weighed his options before deciding on West Point about two weeks ago.

Chrisman, who scored a 33 composite on the ACT and compiled a 4.3 grade-point average at Rogers, said he accepted the appointment to Army with an eye on a future career in military intelligence or cybersecurity.

"When I was looking at colleges my junior year, I knew this was an option," Chrisman said. "I just saw the opportunities that can open up for me later in life, and serving my country is one of the greatest honors I can have. I saw this as a path for me."

Becci Neal is Chrisman's mountain biking coach for the Rogers All-Mountain Shredders, a composite team made up of students from schools in the Rogers Public Schools system.

Neal, whose family owns Mojo Cycling in Bentonville, is a PE teacher at Darr Elementary School and formerly coached at Rogers Heritage.

"When Arkansas got a NICA program, I went to the first leader's summit," Neal said. "I was the bike sponsor at Heritage at the time and a mountain biker, so it was something I wanted to be involved in."

Chrisman finished sixth overall this past season in the varsity boys division of the state NICA competition. In addition, he also competes in enduro races.

He is scheduled to report to West Point for R-Day on June 29, but that date could change as there is a Department of Defense travel ban until June 30.

"They are telling us to be flexible, so we're just waiting to see," he said. "It could alter the date some, but I'm ready to go for June 29."

Chrisman said being in New York and away from family would be an adjustment, but he is looking forward to "taking a path I've never been down before."

Covid-19 has also presented Chrisman and other high school seniors a path they never imagined they would travel. Senior proms and graduation ceremonies have been canceled or altered, and schools across the country are trying to complete the year with online-only classes.

When Chrisman is not shredding the mountain bike trails, he competes in track in the 400 meters and is a member of the Rogers 1,600 relay team. He said having the track season canceled was his biggest disappointment from the fallout from the coronavirus.

"It's been sad knowing that March 13 was the last day I will see my high school friends, but there is nothing I can do about this ordeal," Chrisman said. "I've tried to make memories with my family. I can't sit around and sulk about what's happened.

"I've been doing a lot of solo riding by myself. Just put my headphones in and do my miles."