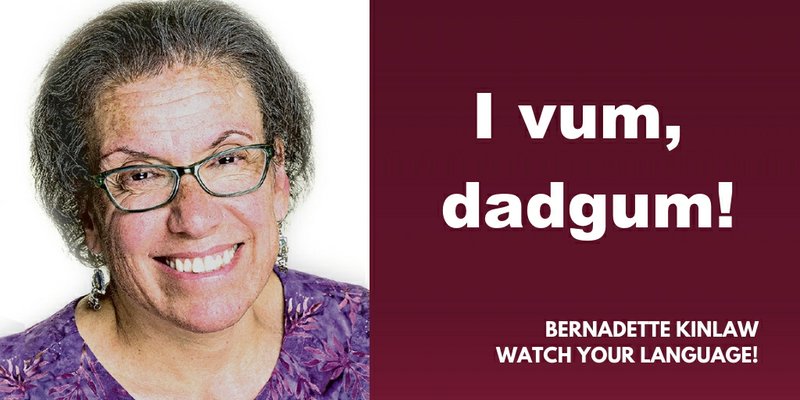 My mother, I'm certain, never uttered a curse word. But you knew she was upset when you heard her say, "Fishcakes and little fishes."

When my father messed up something in his workshop, I'd hear him say, "Darn. Darn. Darn." Always in threes, but fairly low-key.

I asked readers to send me their favorite (publishable) euphemisms from people who didn't want to utter the true "bad words."

Some sent in variations on "dadgum": dad-gum, dadgummit, dadgummit. The idea here, I guess, is to swear using "dad" instead of "God." Poor Dad takes some heat.

Two people sent in "I swan" and "all schwan." I think these were forms of "I swear."

The American Heritage Dictionary had more information on these. It called "I swan" a "chiefly Southern U.S." phrase meaning to declare or swear. It might have come from a twist on "I shall warrant."

Even stranger, the same dictionary says the New England form of this is "I vum." That's supposed to be a nice way of saying, "I vow." I did not see that coming.

Others readers sent me: shucky darn, gol dangit, criminy. I believe "criminy" is a euphemism for "Christ."

I got a kick out this euphemism: "Oh, foot." I think we all know what this is a euphemism for.

A reader wrote to me about my use of "chyron," the words at the bottom of the TV screen during the news. When I mentioned the word, I didn't realize that the word came from the Chyron Corp. The company was the one that created the graphics. The word is in two dictionaries with a lowercase c, though.

The dictionary noted that the lowercase usage of such a brand name joins other generic names that once were trademarks, much to the dismay of many companies.

This is how I learned heroin was formerly a trademark name. German drugmaker Bayer sold a substance that helped to relieve coughs and called it heroin from the German word for "powerful." It stuck. Also, the cereal we now call granola was first called granula. When Dr. John Harvey Kellogg of the Battle Creek Sanitarium, a health resort, started feeding the cereal to patients in the late 1800s, he changed the name to granola because he was sued by the man who invented granula. About a century later, the food was marketed as granola.

A reader sent in a funny dangling participle:

Having died before I was born, I never knew my grandmother.

Yes, this sounds as if you, Dear Reader, died before you were born.

I promise to spend minimum time on anything related to the current pandemic. But recently, I have learned the word "tranche." First, I tried looking it up without the "e" at the end. Apparently, the e is silent. A tranche is a portion of a distributed whole. Here it is two times in The Washington Post:

But the $3 billion the administration sought for a first tranche of purchases wasn't included in the $2.2 trillion stimulus package lawmakers passed last month.

The House and the Senate and the White House are all arguing right now over what the second tranche of funding should look like.

Tranche comes from the French word for "slice." That seems apt.

I found a website that defines a few rare words. Some were so rare that I couldn't find them in either of my go-to dictionaries. I made the executive decision to share only words that appeared in those dictionaries.

First, we have "caruncle." This is not your dad's brother who seems to tag along every time your family decides to spend summer vacation in the car. The caruncle is the little pink triangle in each eye, on the side closest to the nose. I didn't know it had a name. I also noticed the spelling is similar to carbuncle, a painful swelling on the skin. Please trust me to warn you not to look on the internet for images of either caruncles or carbuncles.

Next is "agelast." This is a person who never laughs. What a sad state of being. If anything, I think being an agelast would make you age first, not last. The term was created by French writer François Rabelais. Don't be an agelast.

The site defines "pauciloquent" as concise. Merriam-Webster didn't have this, but it did define "pauciloquy," the noun meaning "brevity in speech." But it's listed as an archaic word. I would argue that a person aiming to be pauciloquent would refrain from using such a long word.

A "cacoethes" is a mania or desire for something. Apparently, mania is considered by Merriam-Webster to be a bad thing, because the roots mean "bad" and "disposition." The pronunciation of "cacoethes" is fun. The first syllable rhymes with "back," then there's a long o, then a ­wee-thees. Neither dictionary offered the word used in sentences.

And I'll end with the adjective "mephitic," meaning foul-smelling. The word goes all way back to the 1600s. (Maybe things were smellier then?) I know you'd like to know the noun form, mephitis. This stay-at-home time might be perfect for breaking out this one.

What is that mephitis? Go take a shower!