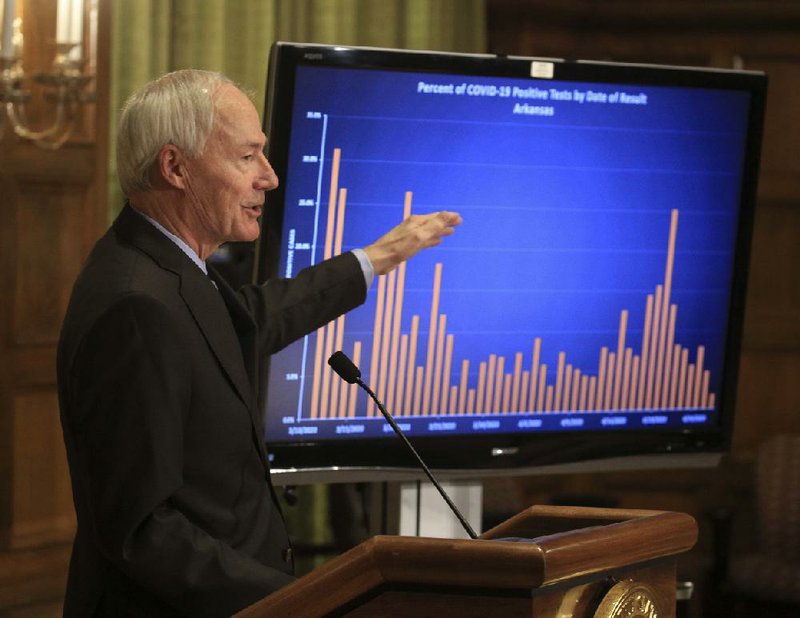 Gov. Asa Hutchinson said Monday that he and the state's health officials will be monitoring the spread of covid-19 in two Southern states where restaurants resumed dine-in service, as Arkansas looks at an early May start to reopen some businesses.

The state Department of Health reported an increase of 68 covid-19 cases over a 24-hour period Monday evening, the third consecutive day in which the number of new positive cases has fallen. That brought the total number of reported cases in the state to 3,069.

[Video not showing up above? Click here to watch » https://www.youtube.com/watch?v=QQSN62bZdJU]

A single new death attributed to the coronavirus Monday brought the state's death toll to 51.

At his daily news briefing Monday, Hutchinson pointed to the declining numbers of newly reported cases -- as well as other measures, such as an increase in testing and a decline in emergency room visits for flu-like symptoms -- to express optimism that the state could soon pass certain benchmarks that officials hope to meet before allowing shuttered businesses and services to reopen.

"We're on a downward slope, but we haven't been there for 14 days," Hutchinson said. "That's important; that's what they talk about nationally."

The governor has said he will make a decision later this week on whether the state can safely allow restaurants, gyms and beauty salons to reopen next Monday.

Besides Tennessee, three neighbors of Arkansas are loosening restrictions, according to the AP.

Next Monday, Missouri will allow all businesses to reopen, some with restrictions, and will allow large gatherings.

Texas, which reopened state parks, plans to end stay-at-home orders Thursday and on Friday allow restaurants, retailers, movie theaters and malls to reopen with some restrictions.

Hard-hit Louisiana, where covid-19 infected 27,000 people and killed 1,700, will begin to loosen its stay-at-home order May 16, including the reopening of churches, more retailers and some restaurant dine-in services, but with occupancy restrictions.

Hutchinson said his health secretary, Dr. Nate Smith, was in contact with health officials in Tennessee, which the governor noted is both a source of and destination for workers who cross the river daily. While expressing confidence in the state's Republican governor, Bill Lee, Hutchinson said he would be watching the potential effects of the decision to reopen restaurants.

"As they open it up, we're going to be instructed in the next few days and week as to what happens in those states," Hutchinson said. "So we do learn from each other."

Two of the state's most recent coronavirus-related deaths were of women who had been living at nursing homes in Pulaski County, according to reports from the county coroner's office.

On Monday, Smith said that 203 of the state's total covid-19 infections were among nursing home residents, while 115 nursing home staff members had tested positive for the disease caused by the coronavirus.

The Health Department has tracked 15 deaths among residents of nursing homes and assisted living facilities, according to its records.

On Sunday, 89-year-old Anita Gullett died at Baptist Health Medical Center, almost a week after having been admitted to the hospital from the Village at Valley Ranch nursing home with shortness of breath and a fever, according to a coroner's report.

Gullett's close friend and emergency contact, Teddie Siebert, said on Monday that a stroke and other medical issues had caused Gullett to be in and out of hospitals in recent years. Earlier this month, she said, Gullett sprained her ankle at her home in Little Rock and was moved to the Village at Valley Ranch to recuperate. Gullett had been at the facility only a few days -- in isolation -- before she started getting sick, Siebert said.

"She was raging mad that they had quarantined her," Siebert recalled of her last conversation with her friend, whom she described as "strong willed."

Gullett tested positive for covid-19 after arriving at the hospital, according to the coroner's report. She was placed on a ventilator several days before her death. Siebert said she did not know exactly how her friend contracted the virus, as she said Gullett had been in contact with at least two people who later tested positive.

Early Monday morning, the death of 86-year-old Doris Bitner from covid-19 was reported to the coroner through Arkansas Hospice, according to the coroner's report.

Bitner's husband of 62 years, Lynn Bitner, said his wife had been living at the Lakes at Maumelle Health and Rehab center since January, where she was being treated for Alzheimer's disease. He said Doris Bitner had contracted the virus about two weeks ago from her roommate at the facility and had been housed in isolation since.

Lynn Bitner said he received a call Sunday from doctors who said that his wife was doing better. Then around 2 a.m. Monday, he said, he received another call informing him that Doris had died.

"It was a shock to me because I thought she had turned the corner and was going to beat it," Lynn Bitner said.

Hutchinson told reporters at the governor's news conference that 109 people were hospitalized with covid-19, up two from Sunday. According to the Health Department, 25 of those were on ventilators.

The Health Department did not report additional cases tied to the outbreak at the Cummins Unit on Sunday, though Smith said that about 30 covid-19 tests from the prison have yet to be processed.

Six of the 856 inmates at the prison who tested positive for the virus are being treated at hospitals in Little Rock and Pine Bluff, Smith said.

Hutchinson also responded Monday to an open letter addressing food supply chain issues written by Tyson Foods Chairman John H. Tyson. The letter was published as a full-page advertisement over the weekend in several large newspapers, including the Arkansas Democrat-Gazette.

In the letter, the executive of the Springdale-based company expressed concerns about food-processing plants being forced to close because of the virus, which Tyson argued was creating vulnerabilities in the food supply chain.

While 13 meat-processing plants around the country have had to close because of workers contracting the virus, Hutchinson noted that none of those closures have been at plants in Arkansas.

"Arkansas is critical not just in our own food chain, but in the nation's and the world's food chain," Hutchinson said.

Smith said the Health Department has taken proactive steps to protect food-processing plants, including distributing materials in Spanish and Marshallese and developing contingency plans in case a plant does have to close because of the spread of the virus.

Over the weekend, Smith said, the state tested about 250 Marshallese people -- many of whom work at Tyson chicken-processing plants in Northwest Arkansas -- and that the results came back showing that four had tested positive.

"We are monitoring that group very closely, and at this point it does not look like we have a problem with the spread of covid-19 in that community," Smith said.

Information for this article was contributed by Eric Besson and Nathan Owens of the Arkansas Democrat-Gazette.