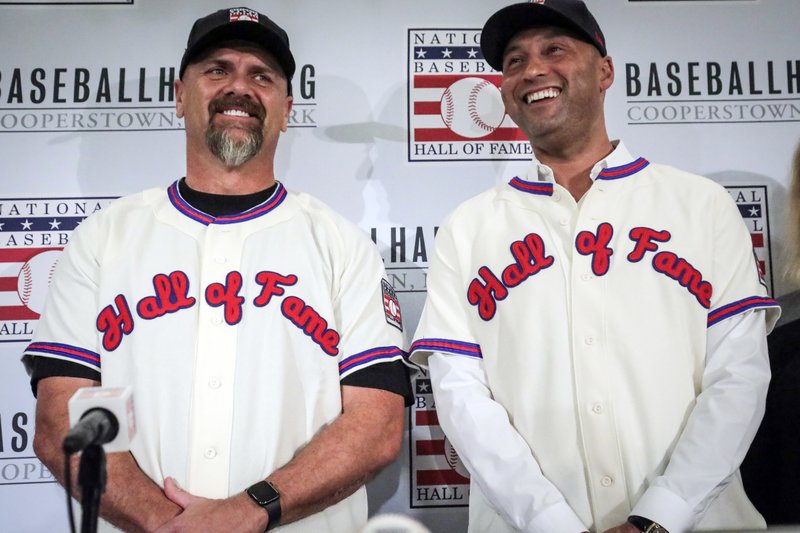 FILE - In this Jan. 22, 2020, file photo, former New York Yankees shortstop Derek Jeter, right, and former Colorado Rockies outfielder Larry Walker pose after receiving their Baseball Hall of Fame jerseys during a baseball news conference in New York. Jeter and Walker and the rest of this year's Baseball Hall of Fame class will have to wait for their big moment at Cooperstown. The Hall of Fame announced Wednesday, April 29, 2020, that it has canceled its July 26 induction ceremony because of the coronavirus outbreak. (AP Photo/Bebeto Matthews, File)

Derek Jeter, Larry Walker and the rest of this year's Baseball Hall of Fame class will have to wait another year for their big moment at Cooperstown.

The Hall of Fame announced Wednesday that it has canceled the July 26 induction ceremony because of the coronavirus pandemic.

Instead, the class will be included at next year's induction festivities -- along with any additional new choices -- on July 25, 2021.

A record crowd of over 70,000 had been expected this summer in an outdoor field at the small town in upstate New York to honor Jeter, the former New York Yankees captain who came within one vote of unanimous election by the Baseball Writers' Association of America in January.

Jeter and Walker were to be inducted with catcher Ted Simmons and the late Marvin Miller, the pioneering players' union head who negotiated free agency and transformed the sport.

"Being inducted into the Hall of Fame will be an incredible honor, but the health and safety of everyone involved are paramount," Jeter said in a statement released by the Hall. "I respect and support the decision to postpone this year's enshrinement and am looking forward to joining current Hall of Famers, fans, staff and my family and friends in Cooperstown in 2021."

This will be the first year without an induction ceremony since 1960.

"It was a very difficult decision, but with so many unknowns facing the world, the board felt strongly that this was the right decision," said Hall member Joe Morgan, vice chairman of the shrine's board.

Record attendance for an induction ceremony was set in 2007, exceeding 70,000 when Cal Ripken Jr. and the late Tony Gwynn were enshrined. Cooperstown is within easy driving distance of the New York metro area, and loads of Yankees fans had already made their plans to see Jeter on the Hall stage.

Jeter, now the CEO of the Miami Marlins, and Walker were elected by member of the BBWAA. Simmons and Miller were chosen in December by the Hall's Modern Era Committee.

"I fully understand and agree with the board's decision," Walker said in a statement from the Hall. "It is most important to do the right thing for everybody involved, and that means not putting any participants in jeopardy."

"I commend the board for making this decision under these difficult circumstances, particularly in New York, a state severely hit by the pandemic. This was the wisest and smartest thing to do, given the existing environment and the danger that this pandemic presents," he said.

Next year's first-time eligible players have no odds-on favorites: Torii Hunter (Pine Bluff) and Mark Buehrle are among the players who will be on the BBWAA ballot for the first time.

If anyone new is elected, it would be the first ceremony since 1949 to combine multiple classes. 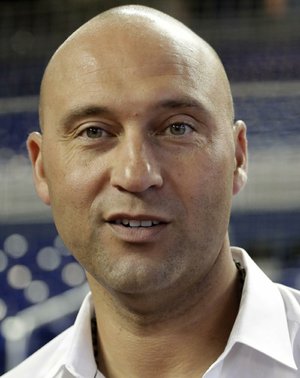 Miami Marlins CEO Derek Jeter talks with the news media before a baseball game against the Atlanta Braves, Friday, May 3, 2019, in Miami. (AP Photo/Lynne Sladky) 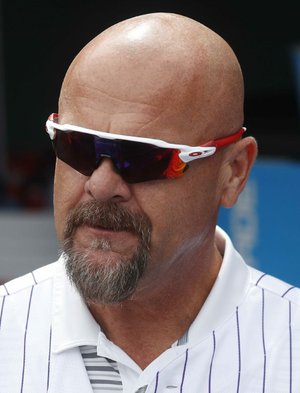 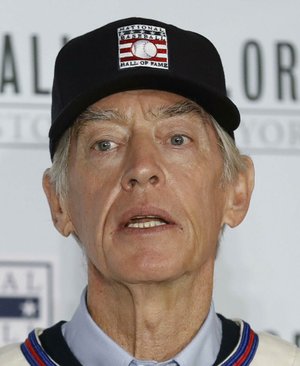