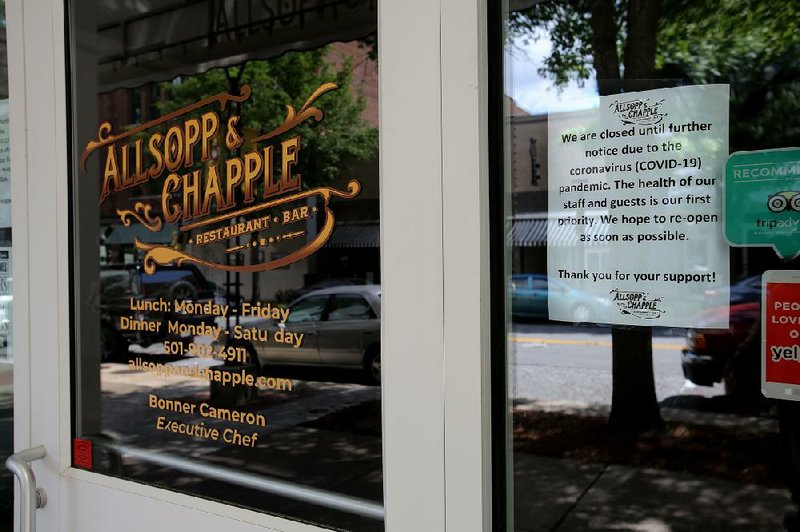 A sign on the door Wednesday at Allsopp and Chapple in downtown Little Rock notes that the restaurant is closed until further notice. (Arkansas Democrat-Gazette/Thomas Metthe)

Several restaurateurs said Wednesday that they were surprised by Gov. Asa Hutchinson's decision to permit restaurants to again allow dine-in customers on May 11 with reactions ranging from caution to shock.

Most restaurant owners interviewed said they felt it was far too early to ensure the safety of staff and customers from the spread of the coronavirus.

Capi Peck, owner-chef of Trio's in west Little Rock and also a member of the Little Rock Board of Directors, said she was expecting the governor to set the date for later in May or even in June.

Peck added she has no present plans to reinstate dine-in service.

"Absolutely not," she said Wednesday. "I didn't even have to think twice about it."

Restaurants in Arkansas have been limited to takeout, delivery and drive-thru service since March 20. Under new guidance Hutchinson announced on Wednesday, restaurants next month must implement a number of restrictions before reopening their dining rooms, including limiting capacity, maintaining distance between customers, requiring masks except while eating, screening employees daily and cleaning regularly.

Peck explained that she has, over the past six weeks, redesigned Trio's into what she calls a successful takeout and delivery operation, which has, among other alterations, involved turning much of the restaurant's former seating space into setup stations for to-go orders.

Across town, Bruno's Little Italy's curbside pickup operation was so overwhelmingly successful from the moment the city and Hutchinson announced the suspension of dine-in restaurant service that the downtown restaurant had to add a second phone number to handle the volume of orders. The restaurant also recently added delivery service that has been expanding over an increasing area of downtown and central Little Rock.

"I'm not going to change a thing from the business model we have right now," said Gio Bruno, co-owner of Bruno's Little Italy.

Bruno cited guidelines from the Centers for Disease Control and Prevention that reopenings of businesses, including dine-in restaurants, should only take place 14 days or more after the virus peaks in individual communities, and, he said, that peak has not yet occurred in Arkansas.

Bruno and Peck both worried about customers removing masks after their orders have been taken, as Hutchinson mentioned in his news conference as being acceptable. It allows customers to eat and drink without obstacle, but it's risky, they said, because of the lack of distance between the customer and the server when depositing plates or refilling glasses of wine.

Bruno said the governor's suggestion that outdoor or patio dining with the same restrictions as indoor dining -- 33% capacity, tables, 6 feet apart, no parties larger than 10, staff and customers wearing protective gear -- might eventually be an entry point toward his offering some kind of sit-down dinners, but "I'm not ready to do anything like that yet."

Frank Fletcher, who operates Benihana and the Riverfront Steakhouse in North Little Rock's Wyndham Riverfront Hotel, said that the restrictions on dine-in service would be cost prohibitive for many eateries.

"Thank God we get to open, but there isn't a restaurant in town that can operate successfully at 33% [capacity]," Fletcher said.

He said he would have no trouble maintaining a 6-foot distance between tables. In fact, he envisions a setup where he would feed Benihana customers, which has maintained a takeout operation, in various rooms in the hotel and in the currently idle steakhouse, so that diners wouldn't even see one another.

"I'm glad they're trying, but I don't understand the thinking," Fletcher said. "With the kitchen staff, the service people, it doesn't make business sense" to operate at one-third capacity.

The revenue, he suggested, wouldn't be enough by itself to sustain a restaurant.

"It'd be less than being closed," he said.

Scott McGehee, executive chef and partner in Yellow Rocket Concepts, which operates eight restaurants -- Heights Taco & Tamale Co., Lost Forty and ZaZa Fine Salad + Wood-Oven Pizza Co. in Little Rock, two Big Orange restaurants in Little Rock and one in Rogers and Local Lime in Little Rock and Rogers -- said he and his partners had not yet made any decision on whether their establishments would reopen for dine-in, but he expected to have a statement sometime today.

"We'll sleep on it and discuss it in the morning," he said. "Obviously, we want what's best for our work family and our guests."

Jim Keet, who's the first "J" in JTJ Restaurants, says he'll open all six of the company's Taziki's restaurants -- four in Central Arkansas plus two in Northwest Arkansas -- to dine-in customers on May 11 as well as Paninis & Company in Little Rock's Midtowne Shopping Center. And he'll open west Little Rock's Petit & Keet, which started curbside pickup service Monday, on May 18.

"That's our third anniversary and we wanted to make a big deal out of it," Keet explained.

The additional week also will make sure all the governor's protocols for dine-in service are in place and that new menu items will be ready. He wants to continue operating the takeout part of the business as well.

Keet sees an early July opening for his latest project, Cypress Social, nearing completion in the former Cock of the Walk off Maumelle Boulevard in North Little Rock.

Keet said he has been in regular contact with the governor and Scott and was aware before Wednesday's announcement of the May 11 target. He described it and the decision to initially restrict customers to 33% of occupancy as a compromise for restaurants between health concerns "and businesses going broke."