Thinking of baseball during slow time 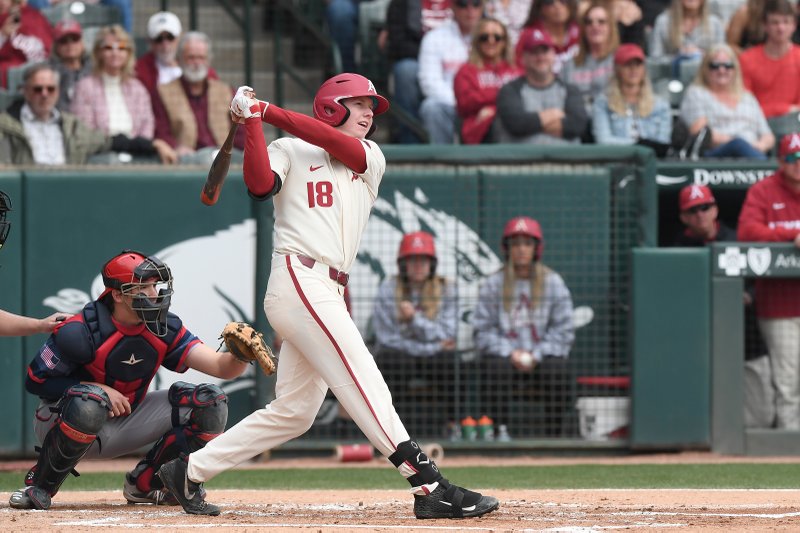 Arkansas' Heston Kjerstad gets a hit against South Alabama Sunday March 8, 2020 at Baum-Walker Stadium in Fayetteville. The Razorbacks won 5-3 and are back at home to take on Grand Canyon University Tuesday at 6:30 P.M. ( J.T. Wampler)

It's been noted many times in this space my love for the game of baseball, a sport that usually dominates my spring and summer thought process, television viewing habits and vacation plans.

Having the Arkansas baseball season end abruptly because of the coronavirus and the start of the Major League Baseball season postponed has been a tough one to deal with for a Diamond Head such as myself.

Sure I've watched some old Razorback and St. Louis Cardinals games, more than a few classic ones on MLB TV and other channels and read about everything I can get my hands on about when things might get going again.

It seems now that MLB is planning on having its draft on June 10. It could be either a 5 or 10 rounds according to a report from MLB TV insider Jon Heyman.

An MLB.com mock draft earlier this week projected Arkansas junior slugger Heston Kjerstad, Baseball America's 15th-best prospect, as the 11th pick in the first round to the Chicago White Sox.

It views Kjerstad as the best slugger other than Arizona State first baseman Spencer Torkleson, projected as the first pick in the draft by the Detroit Tigers.

"The White Sox haven't taken a high schooler in the first round since 2013 and Kjerstad has as much raw power as any college bat not named Torkelson," MLB.com writes.

Arkansas shortstop Casey Martin, who has been a projected first-round pick in many mock drafts, was not listed in MLB.com's 29-pick first round in which Houston does not have a selection.

It is thought both Martin (Baseball America's 27th-best prospect) and Arkansas junior catcher Casey Opitz (102) and maybe Matt Goodheart (276) will be taken in the shortened draft along with Kjerstad (15).

Razorback head coach Dave Van Horn and his staff will most likely have to worry about a few signees from a 2020 class that is ranked third nationally by Baseball America.

The first and foremost of those is Kingwood, Texas, pitcher/infielder Maysn Wynn, Baseball America's 44th-best prospect in the draft.

It appears the Major League Baseball season might get going in late June or no later than July 2 and be played at home sites, but with no fans according to USA Today baseball writer Bob Nightengale.

While that may look and sound weird, a 100-game schedule could still be played and would be a tremendous for those of us who are craving live baseball.

It appears MLB, which would have a short spring training warm up in Florida and Arizona, is considering three 10-team divisions. Teams would only play those in their own division to limit contact and travel.