As blame traded, talks on new aid still in gridlock 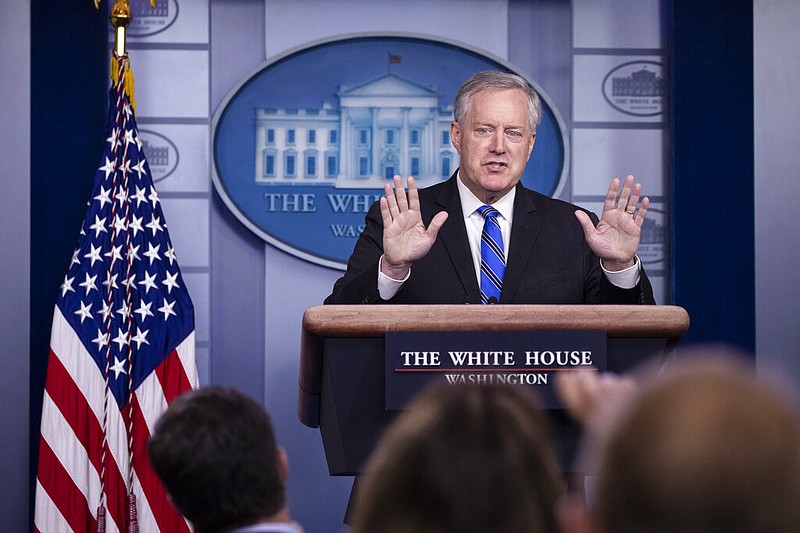 WASHINGTON -- Nearly 30 million workers are to lose $600 in enhanced weekly unemployment benefits that have kept much of the economy afloat these past four months during the coronavirus pandemic, as top lawmakers and the White House remain at an impasse over how and whether to extend the benefits.

Most of the last checks went out this week, but the program officially ended Friday, a day that Democrats and Republicans spent trading barbs over who was to blame for the failed negotiations.

White House Chief of Staff Mark Meadows said Democrats had rejected reasonable offers, while House Speaker Nancy Pelosi, D-Calif., derided Republicans for trying to advance a short-term fix that would have extended the benefits for just a week.

"The president has been very clear for us to be aggressive and forward-leaning to make sure that they get protected, and yet what we're seeing is politics as usual from Democrats on Capitol Hill," Meadows said, addressing reporters in the White House briefing room.

"Democrats have made zero offers over the last three days," Meadows said. He said Democrats are "willing to play politics" and are acting like they "hold all the cards."

President Donald Trump is eager to extend the benefit, undercutting his GOP allies on Capitol Hill who have spent considerable effort devising an alternative that could unite Republicans.

The unemployment insurance is a principal element as talks continue on a coronavirus relief bill, which is expected to grow considerably from a $1 trillion-plus GOP draft released this week. Top Democrats announced a meeting with administration representatives for this morning after talks Thursday night at the Capitol failed to produce a breakthrough.

As Meadows was speaking, Pelosi held a news conference on Capitol Hill, where she criticized Republicans for proposing the short-term extension with their backs against the wall.

[Video not showing up above? Click here to watch » https://www.youtube.com/watch?v=OZ2QfYMIhOg]

"What are we going to do in a week?" Pelosi asked. "Clearly they did not understand the gravity of the situation." She said a short-term extension makes sense only if the two sides are close to a deal. "Why don't we just get the job done?" she asked.

An aide familiar with the talks said Pelosi rejected an administration offer of a four-month extension of the benefit at $400 per week, combined with additional provisions for particularly hard-hit businesses and a shield against lawsuits for businesses, schools and other entities that reopen as the pandemic continues to rage. The aide wasn't supposed to divulge contents of the talks and spoke to The Associated Press on condition of anonymity.

Also at issue in the negotiations is an almost $1 trillion Democratic demand for funding for state and local governments, a second $1,200 direct payment to most American adults, more than $100 billion to help schools reopen and a liability shield measure that is essential to Senate Majority Leader Mitch McConnell, R-Ky.

With pandemic-era assistance programs poised to lapse, House Democrats and anti-hunger advocates are pushing for universal free lunch for schoolchildren.

The first round of the Small Business Administration's Paycheck Protection Program loans expired at the end of June, as did the Pandemic EBT program, a debit-card benefit for households that need help to afford food. The Republicans' Health, Economic Assistance, Liability Protection and Schools Act [the Heals Act] proposal unveiled this week did not expand the Supplemental Nutrition Assistance Program, better known as food stamps, or extend the Pandemic EBT program.

[Video not showing up above? Click here to watch » https://www.youtube.com/watch?v=uQDdFIOaVk4]

The U.S. Department of Agriculture put out a news release Wednesday trumpeting a food-aid increase in fiscal 2021 aimed at helping people "adjust to changing economic conditions and support Americans during tough times," Pam Miller, administrator of the Food and Nutrition Service, said in a statement.

However, Maya Sandalow, a policy associate focused on food benefits at the Center for Science in the Public Interest, said this is an annually mandated adjustment that reflects the huge increase in food prices. Grocery prices showed their biggest monthly increase in nearly 50 years in April.

"The release gives the impression that the agency is increasing [food stamp] benefits because of the pandemic," Sandalow said. "Not only does the adjustment leave out some people, it's not a real increase. Moreover, [those] benefits have long been vastly inadequate, allocating only $1.40 per person per meal in 2020."

The USDA did not provide a response for publication.

Meanwhile, the federal government has refused requests from jurisdictions including the District of Columbia and Maryland to extend a food-stamp program waiver past August. This means that despite the ongoing pandemic, families will once again be required to prove their incomes or risk losing their benefits.

As many as 30 million workers, including gig workers and the self-employed, are currently receiving some form of unemployment insurance, which has been supplemented by $600 in extra federal benefits each week -- on top of whatever state unemployment benefits a worker gets -- since the crisis deepened in March.

Many economists and workers credit the additional money with helping them keep up with basic bills during the crisis: rent, mortgage, car and credit-card payments, as well as everyday expenses like food. Most states cap weekly unemployment benefits well below $600; some pay as little as $275 a week as their maximum.

In March, when the economy was beginning to fail, because of the forced shutdowns to stop the spread of the virus, lawmakers rallied around the idea that they were rushing to shore up the economy through a short-lived public health crisis, agreeing to pass more than $2 trillion in stimulus that they thought would see the nation through the summer, when they hoped the pandemic would ease.

But surging coronavirus cases have prompted many states to reverse course and close down restaurants and bars again, weighing on the economic recovery. The virus has killed more than 153,000 people in the United States as of Friday, according to data gathered by The Washington Post.

Raven Holmes, 38, a single mother of two who lost her job as a secretary in New Haven, Conn., in February, said she already instituted a series of cuts in anticipation of the benefits' expiration. She started carpooling to the grocery store, split a BJ's Wholesale Club card with family to buy food in bulk, and has stopped getting takeout or restaurant food.

"Once you have absolutely nothing, it's not hard at all," she said, about accepting charity.

The longer Congress stalls, the more likely it is that she will have to plead with her landlord, utility companies, and other bill-holders to let accounts go into arrears until she lands on her feet again.

"Money is not a resource that can be depleted. It's a man-made thing: if you need more make more," she said. "There are other countries -- their citizens are fine, nobody is suffering and everybody is healthy. All our government wants is money in their pockets, while the people are poor and starving and scrounging."

Republicans have increasingly coalesced around the idea of a short-term fix to avoid a disruption in benefits. But Democrats have repeatedly rejected that approach and continue pushing for a wide-ranging $3 trillion bill the House passed in May. That bill would extend unemployment benefits through January.

Senate Majority Leader Mitch McConnell, R-Ky., unveiled a $1 trillion counterproposal Monday, but it was quickly rejected by many members of his own conference.

Senate Republicans have proposed cutting the $600 federal benefit to $200 per week for two months while giving states time to transition to a more complicated system that would aim to replace 70% of a worker's previous wages. A second proposal emerged this week that would give states the choice to implement the $200 bonus or move to a system that would replace up to 66% of wages.

Pelosi said such a short-term extension might make sense if a deal were in sight on a larger bill and more time was needed to complete it. But, she said, that is not the state of play as the parties remain far apart.

"We anticipate that we will have a bill, but we're not there yet," Pelosi said.

On Friday, Trump took to Twitter to explicitly endorse extending the $600 payment and criticizing Schumer.

"Very disappointed in SenSchumer for blocking the temporary extension of the $600 unemployment benefits. The Do Nothing Democrats are more interested in playing politics than in helping our deserving people," Trump tweeted.

"Do we want to continue to come to an agreement? Absolutely," Schumer said. "But it's got to meet the gravity of the problem."

Both sides say the talks have not produced much progress, but they could be nearing a critical phase over the weekend and into next week. The pending coronavirus rescue bill, the fifth since the pandemic has struck, is likely the last one before the November election.

"The Democrats are playing for Nov. 3, and we're playing for the good of the people. It is a disgrace that they are not negotiating," Trump said Friday. "I think it's a bad political game. I think it hurts them."

Information for this article was contributed by Jeff Stein, Erica Werner, Laura Reiley and Eli Rosenberg of The Washington Post; and by Andrew Taylor and Lisa Mascaro of The Associated Press.