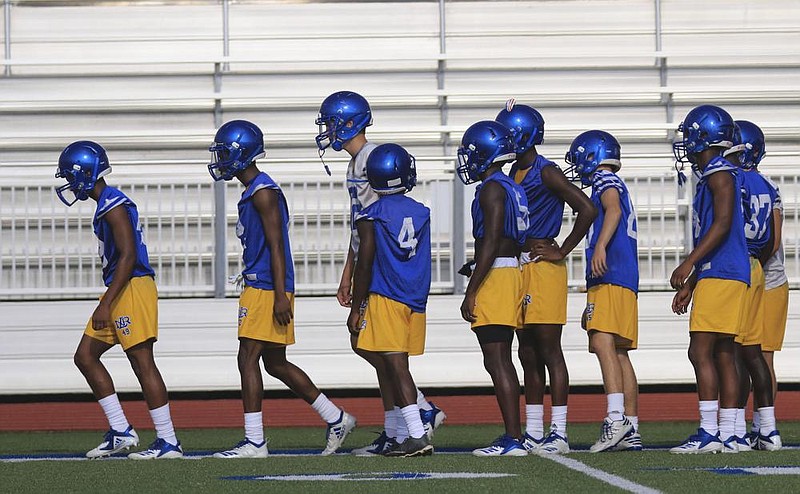 Arkansas Gov. Asa Hutchinson announced that football teams can begin practicing with helmets Monday, which is the first date for fall practice on the Arkansas Activities Association's 2020-21 calendar.

Teams will be allowed to wear helmets only Monday and Tuesday, then can use shoulder pads along with helmets beginning Wednesday, according to the AAA.

Volleyball teams also got the approval to practice Monday, AAA Executive Director Lance Taylor said. Along with football, volleyball is considered a contact sport by the state under Phase One of the lifting of statewide restrictions caused by the covid-19 pandemic.

Hutchinson has asked the AAA to submit a plan to the Arkansas Department of Health on what the organization will do for the 2020 season as far as practices and games.

The governor expressed to the football players to not only be ready for practice, but to also wear their face coverings to help protect against the coronavirus. As of Friday afternoon, there have been 42,511 cases of the coronavirus in Arkansas, with 507 hospitalizations and 453 deaths.

"My message for the football players on Monday is to grab your helmet for practice and then after practice, grab a mask," Hutchinson said. "Because our responsibility for safety extends beyond the practice field."

The AAA later sent a letter to coaches Friday afternoon detailing the association's guidelines for safety and practice. Locker rooms can be used but must be sanitized after each use. Masks must be worn by players when they're not actively participating and social distancing guidelines of at least 6 feet are still in place when possible.

Taylor was at the governor's news conference and had a message for the state's coaches.

An advisory group led by Arkansas Surgeon General Dr. Greg Bledsoe will meet beginning Monday to help assist the health department on football, as well as volleyball and cheerleading.

For eight-time state championship coach Kevin Kelley, he said he's excited to have some form of football normalcy come Monday at Pulaski Academy.

"I'm happy for our coaches, but I'm even more happier for our players," said Kelley, who also is the athletic director at the school. "Our kids can at least see a light at the end of the tunnel."

Bobby Bolding, White Hall's football coach and athletic director, said he was pleased with the governor's announcement. However, he also said he understands that the start of the 2020 season is not guaranteed for the 193 11-man football teams in Arkansas yet.

"I'm not a doctor. I'm a football coach," Bolding said. "I'm not on the governor's task force either. If they want to talk to me about down-blocking for eight hours, I'll do that. But we're going to keep following the guidelines. We'll keep our fingers crossed."

"Obviously, it's good that we get to practice Monday," Volarvich said. "There are still a lot of questions that need to be answered. Our quarterbacks were not able to hand the ball off all summer, things of that nature."

The Scrappers are scheduled to face Texarkana (Texas) Pleasant Grove on Aug. 28, but that game is up in the air because of Arkansas' uncertainty of being able to start on time. Pleasant Grove is a Class 4A school in Texas which will have its teams split either starting the season on time or being delayed -- Class 4A down to 1A teams can start their seasons on time the week of Aug. 24-29 in the state, while Classes 5A and 6A won't kick off their seasons until at least Sept. 24.

Volarvich is entering his sixth season at Nashville and led the Scrappers to a Class 4A state championship in 2015. He said that even with this year's situation with covid-19, getting ready for the season is similar to previous seasons.

"For a football coach, you never know if you feel like you're ready," Volarvich said. "We'll continue to go with the governor and the regulations that the AAA provides us."

The Arkansas Activities Association halted all athletic activities, including competition and practices, with a dead period in March. Spring sports seasons in baseball, softball, soccer and track and field were officially called off April 8 by the AAA.

Hutchinson announced May 21 that schools could resume in-person workouts as part of the state's Phase One for athletic activities. But contact sports such as football and volleyball were limited in their activities.

The dead period forced the cancellation of spring football practice, which is typically used by most programs in the state to install their offensive and defensive schemes before the summer. While in-person workouts resumed, 7-on-7 events and team camps throughout the state did not take place because of football being in Phase One.

Conway volleyball Coach Laura Crow, who is a member of the governor's high school sports advisory group, said she hopes athletes in all sports can play in the 2020-21 school year.

Kelley said while being able to work with his players over the past two months in person has been beneficial, it doesn't compare to actual football work that the Bruins will at least get to do next week.

"At first, we were glad to be able to work out," Kelley said. "But then you realize you're only doing the same thing. It drove me crazy. We were dying to move forward.

"But everybody is in the same boat."

Schools throughout the state are set to open the week of Aug. 24.

The first day of the high school football season is scheduled for Aug. 27, with a pair of state champions -- Pulaski Academy (Class 5A) and Joe T. Robinson (Class 4A) -- meeting at PA's Joe B. Hatcher Stadium in Little Rock. That game has also caught the attention of the world's top sports network.

Kelley said ESPN has contacted him about possibly airing the game, if it is played. Pulaski Academy's 2017 game against Bossier City (La.) Parkway and its 2009 game at Little Rock Christian were both aired on ESPNU.

With covid-19 affecting the live sports television schedule, Kelley said that if Arkansas high school teams can get the go-ahead to start on time, he'll be glad to showcase the Bruins on national television again.

Bolding, a three-time state championship coach at Stuttgart (2002) and Pine Bluff (2015, 2016), said football teams across the state are almost like a test dummy to see if sports could be pulled off in the state this fall. The veteran coach said it's up to the players and coaches if they are to play football in 2020.

"We have to adapt," Bolding said. "We will adapt and move forward."

m Gov. Asa Hutchinson announced Friday the creation of an advisory group for high school sports leading up to the 2020-21 school year. The 14 individuals from the state’s sports, educational and medical fields are tasked with considering the safest ways to conduct sports and activities:

• Fitz Hill, state board of education 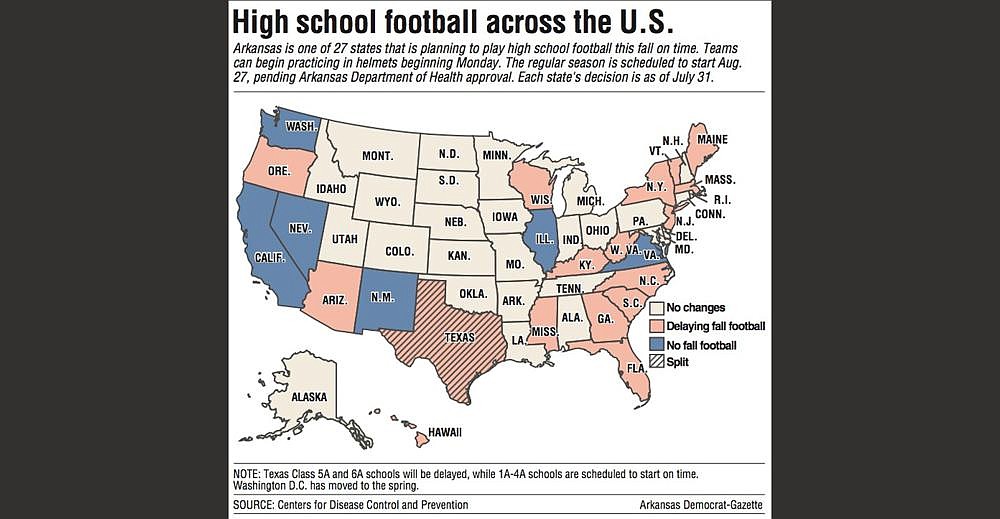