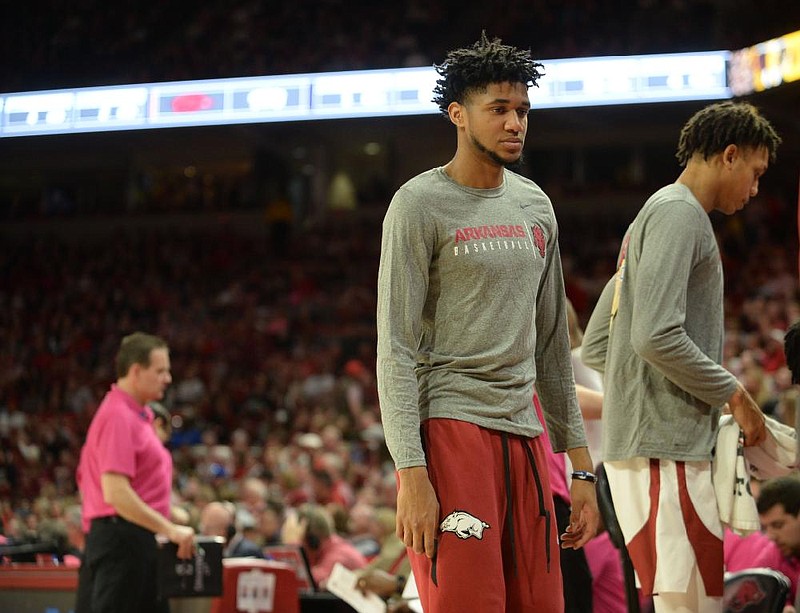 Arkansas guard Isaiah Joe (center) returns to the bench Saturday, Jan. 25, 2020, during the second half of the Razorbacks' 78-67 win over Texas Christian in Bud Walton Arena. (NWA Democrat-Gazette/Andy Shupe)

FAYETTEVILLE – Isaiah Joe is returning to the University of Arkansas basketball team for his junior season.

Joe, a 6-5 guard from Fort Smith Northside, announced on his Twitter account Saturday that he has withdrawn from the NBA Draft and will be back at Arkansas.

“I appreciate everyone who has been in my corner and supported me throughout my career and during this quarantine,” Joe wrote. “With that being said, there is still a lot to be accomplished and I believe that it all starts here as an Arkansas Razorback!”

Joe averaged 16.9 points last season and will be the Razorbacks’ leading returning scorer.

“We are so excited to have Isaiah back,” Arkansas Coach Eric Musselman said in a news release. “He received incredible feedback from the NBA and got valuable experience with NBA interviews. We know how hard of a decision this was for Isaiah and his family.

“Zai’s goal is to have a long NBA career and we can’t wait to continue helping him reach his dream.”

Joe put his name into the draft as an early entry on April 20, but didn’t sign with an agent to retain his eligibility. He had until Monday to withdraw his name from the draft and be able to stay eligible to play for the Razorbacks.