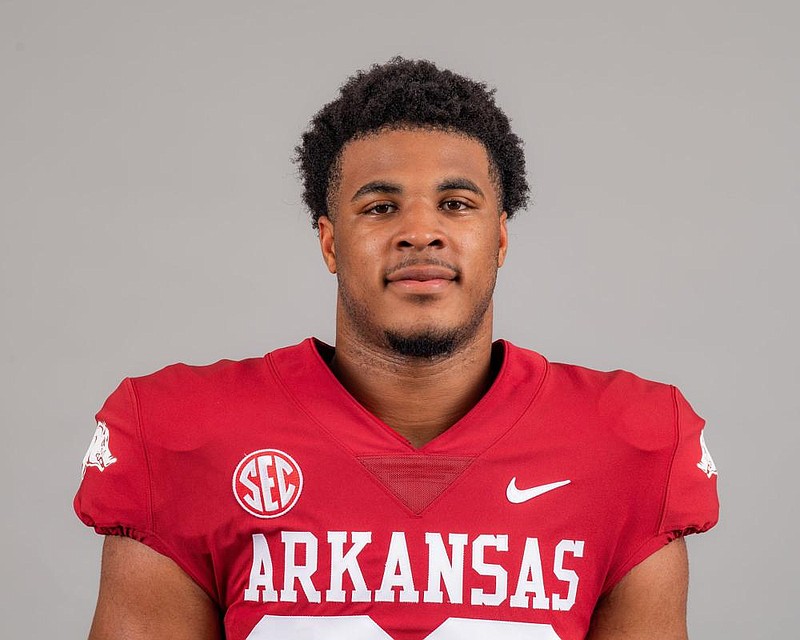 University of Arkansas freshman running back Dominique Johnson pretty much knew he would flip his commitment from Missouri when Coach Sam Pittman hired former Tigers coach Barry Odom as the Hogs' defensive coordinator.

Odom, a long-time friend of Pittman, was let go as Missouri's coach the day after defeating Arkansas in both teams' final game last season.

Johnson, 6-2, 220 pounds, of Crowley, Texas, committed to Odom and Missouri in June before the start of his high school senior season. He became Arkansas' first official signee when he inked with the Hogs on Dec. 18, the first day of the early signing period.

Johnson made an official visit to Columbia, Mo., a few days after the hiring of Drinkwitz.

"With Coach Odom, it felt like a family," Johnson said. "All the coaches welcomed me. They just made it feel like home. Whenever I went, they were nice to me and my family. It was where I wanted to be."

Johnson signed with the Hogs sight unseen until he and his family made an official visit to Fayetteville on Jan. 24.

"It was a lot of trust. I just feel like Coach Odom wouldn't put me in a bad situation based off the time we spent together when he at Mizzou," Johnson said. "He just seemed like a real genuine man, so I know he wouldn't put me anywhere bad. If Coach Odom was there, I knew it was comfortable enough for me to go there, too."

"It was everything I was hoping for and some of the Mizzou coaches went to Arkansas," Johnson said. "So it's kind of like I already knew some of the coaches there and Coach Pittman was just amazing, which made me love it even more."

Johnson said meeting Pittman and his wife Jamie helped him feel good about his decision.

"I don't even know how to explain," Johnson said. "Coach Pittman, he's just real energetic, real loving, real caring. His wife is also amazing. She's real caring, too. They are both real genuine people and they just have a lot of energy. They love Arkansas. They love football."

Pittman and his wife's love for Arkansas was contagious, Johnson said.

"They were basically wanting us to love Arkansas as much as they did," Johnson said. "They were showing Arkansas pride, telling us about Arkansas and that's what made me love it, too."

When Crowley Coach JJ Renendez thinks of Johnson, he said the word "special" comes to mind.

Renendez compares Johnson's attitude and love for the game to that of Oklahoma State senior star receiver Tylan Wallace, whom he coached at Fort Worth South Hills.

Johnson was a team captain as a junior and a senior.

"He's a great kid to be around," Renendez said. "There's always a smile on his face. He's intense on his focus, but you can tell he really enjoys playing the game. That's a special type of kid."

Johnson helped lead the Eagles to the Texas Class 5A playoffs while earning all-district honors as a junior after rushing for 1,109 yards and 15 touchdowns. As a senior, he rushed for 1,300 yards and 25 touchdowns while being used sparingly.

"There were games he didn't play because we didn't need him," Renendez said. "We wanted to keep him fresh. There were games he was out by halftime and he still rushed for over 1,000 yards. When it really comes down to it, he probably really only played about five full games."

Johnson is somewhat of a throwback because of his physical, downhill running style.

"I have a very unique running style," said Johnson, who reports a 315-pound bench press, a 455-pound squat and a 285-pound power clean. "You really don't see running backs like me -- big and tall, ready to get downhill and also make moves on people. I take pride in my ability because I don't see a lot of running backs like me. Most running backs now are small and fast that can move. I'm trying to bring back big backs. That's why I take so much pride in being a running back."

Johnson's highlight video shows him outrunning would be tacklers and bouncing off defenders.

"He's such a thick lower body," Renendez said. "One of his thighs is about as big as both of my legs put together. But I'll tell you this, he's got hips for a big guy like I've never seen.

"He's a big guy that can go through, you bounce off of you, but he's going to make you miss, too. He's got the complete tool kit as a running back and he catches the ball. We could've put him at receiver. He catches the ball just as good as our receivers."

"Coach Smith and I have a good relationship," Johnson said. "He and my mom talk often. I love Coach Smith. We have a lot in common. We both played running back, both loved it. He calls and makes sure I'm doing my workouts."

Johnson will be a younger freshman once he arrives on campus.

"One of the great things about Dom is Dom is going to graduate and he's going to be 17 years old," Renendez said. "So he's a young senior. I should be looking at Dom as a returning senior. He should be coming back for his senior year."

ESPN rates Johnson as a 3-star recruit, the No. 97 running back in the nation and No. 197 prospect in Texas. Smith is telling Johnson to be prepared to play this fall.

The coronavirus pandemic has forced Johnson and other high school athletes to work out without the chance to use their school's facilities, to be creative by doing push-ups, sit-ups and crunches.

"I run a mile every day to stay in shape," Johnson said. "Trying to stay in shape as much as a I can. Not being able to get into the weight room is real hard. That's taken away from my strength."

NOTEWORTHY Rated as a 3-star recruit by Tom Lemming and ESPN. … Named the district most valuable player as a junior and was team captain during his junior and senior seasons. … Rushed for 1,109 yards and 15 touchdowns as a junior. As a senior, rushed for 1,300 yards and 25 touchdowns while being used sparingly.

The 17th in a series featuring newcomers to the University of Arkansas football team.